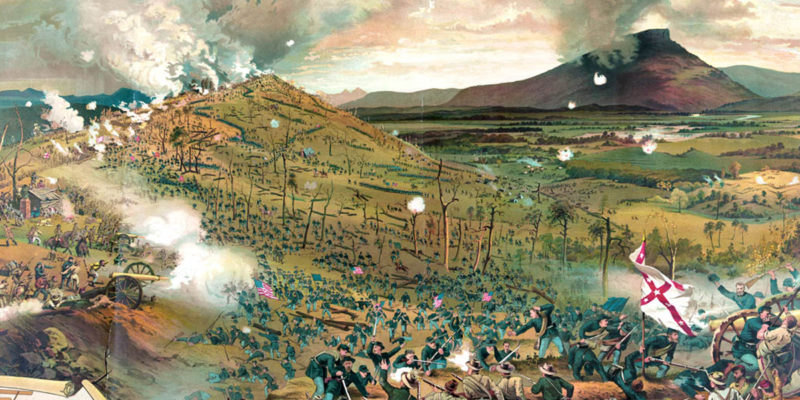 I’ve been giving a lot of thought to courage lately. It cannot be stressed enough, fear is contagious, courage is inspirational. This is true all throughout history.

One story that I’ve given a thought to lately was one from the American Civil War. The battle of Missionary Ridge just outside Chattanooga, TN. This is one of the key battles of the civil war in which Sherman and Grant were facing off against Braxton Bragg. Just days prior, the Union Army was defeated and then captured Look Out mountain but confederate spirits were high. The following battle sealed the fate of the confederates. It’s one that you can read up on, but it’s not that story that I want to focus on, but rather the story inside the story.

A few years ago, I had the pleasure of visiting Chattanooga, TN, and I did some exploring while I was there. I visited Look Out Mountain and it is a very touristy site. From Rock City, to the caves, as well as hang gliding, there’s plenty of reason to visit the area. But I took the time to also learn about the battle and it was there that I heard this story. It was said that the confederates were holding Missionary Ridge and that Grant sent the soldiers up the hill only to be beaten back. Grant sounded the retreat and the union soldiers began to descend back down hill, save one, a young 18 year old man named Arthur MacArthur. Arthur picked up the regimental flag of the fallen flag bearer and instead of heeding the sound of retreat, rushed up the hill. The other soldiers, seeing the flag go up the hill, turned from their retreat and followed their flag.

Meanwhile up on Look Out Mountain, Grant and the other commanders were looking at each other as to who to blame for the non-retreating soldiers. These soldiers were going to lose, and somebody’s head was going to roll… except, Arthur MacArthur made it up the hill, planted the flag and yelled “On Wisconsin!”. That young man’s action led the soldiers to victory and became known as the boy Colonel.  This could have been a devastating defeat for the Union, but save for the inspirational courage of one 18 year old, the fate of the war changes.

Whether that story of Arthur MacArthur is true, it does seem to have some validity to it. Not only does this story impact one war, but carries itself into WW1, WW2, and even the Korean war. You see, Arthur MacArthur had a son named Douglas. Yes, General Douglas MacArthur, the same General who was forced to retreat from the Phillippines, not by his choice, but by orders as was the case in North Korea when the Chinese launched their assault.  Douglas, like his father, wasn’t a retreater. That’s leadership.

And then we have John Bed Wetter as governor in Louisiana who, even after far more leftist governors rescinded their masks mandates, continues to distrust the people of Louisiana and fears their freedom. Compare John Bed Wetter to the Governor of Florida and you can just feel the difference in leadership. One inspires, the other spreads fear.

Then there is the leadership of countries, in which the Western countries seemed lost, unwilling to stand up to Putin, threatening sanctions but appeared to be weak-handed. The whole world was convinced that Russia would conquer Ukraine in a matter of hours and no later than the weekend, but they were wrong. While the world accepted defeat, Zelensky and the Ukrainian people inspired the world with their courage, showing us that the Russian Army wasn’t as strong as it was made out to be. That Russia was a weaker country than most of us thought. It was the strength and courage of the Ukrainian people the encouraged everybody else to stand up to Russia. Courage is inspirational.

So much so that during the State of the Union, Pendejoe Biden spent the first part of his speech to talk about the Ukrainians, to show us, of course, how great America is.

And to hear the Democrats chant “USA” for the first time in their lives, one had to wonder how long they could go without giving themselves laryngitis. Or how they suddenly found that they care about funding the police, despite the video evidence of them demanding the defunding of police. Or how they finally care about border security in the United States. Even Biden walks as though he thinks it makes him look tough even though it really looks like he had just received an enema. But it’s all for show.

Pendejoe and the left simply are so concerned about the messaging but do not care about the actions. They only want to tell you what they think you want to hear and think you’re too stupid to notice the results. Think about the appeal of the SOTU, some of things that he stated “lower your costs, not wages”. Sounds like a solid business plan. “Let’s end cancer”, and of course his great closing line “go get him”. While the appeal of his speech was directed to the ignorant, for those who want to stay informed and actually want to hear the solutions ended up hearing a campaign speech full of empty promises and short on solutions.

And there in lies the problem, people who are struggling to make ends meet don’t care about statistics. promises, and platitudes. People who are having to choose between paying their light bill and the gas in their car don’t care about how great the economy is for other people. Democrats simply don’t get it, reality trumps messaging every single time. Maybe the Democrats should find the courage to search reality.