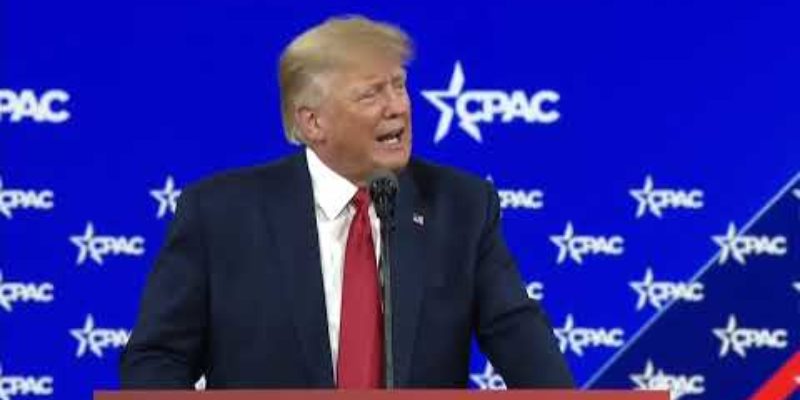 Determined to hold their annual conference somewhere in 2021, the American Conservative Union moved the well-attended gathering of grassroots activists and conservative politicians out of their traditional Beltway setting down to less COVID-restrictive Florida.

That the event went forward was in itself an accomplishment and led to employees returning to work at the Hyatt Convention Center in Orlando for the first time since the lockdown.

What followed was a manufactured Twitter storm by leftist activists trying to taint the event by accusing CPAC organizers of designing a stage that resembled a Nordic rune symbol that had been utilized by a small group of German soldiers during World War II.

Shaken and stirred by this absurd internet brouhaha and a threatened boycott by people who hadn’t left their house aside to protest or riot in the past year, the tenor of Hyatt’s corporate and local management became belligerent to both the ACU and the attendees who essentially underwrote their reopening.

That was unfortunate as the Orlando Hyatt proved to be a great venue in terms of space and accessibility and the attendees would’ve definitely desired a return there for the conference in 2022 and their own individual vacations.

But Hyatt decided to scorn actual paying customers while mollifying “theoretical” ones who are politically radical and emotionally irrational, most of whom can’t remember their own threats from the previous year.

I haven’t patronized a Hyatt since then and have paid more to stay at another hotel chain even when they were the cheaper and more convenient option.

Though not at the Hyatt, the ACU, kept their 2022 event in Orlando, moving their event to the smaller, less accessible, and more bedeviling Rosen Shingle Creek, along the headwaters of the Everglades. And if you needed reminding of their off-the-beaten-swamp location your weak phone signal did so, which made their QR code, internet-based, exact minute, parking exit payment system extra infuriating.

Regardless, the show went on and the event drew participation from a number of national (and international) conservative figures, including Louisiana’s junior senator.

If the only thing you’ve read were news headlines, you’d think that the 45th president was shaking red and gold pom-poms for Vladimir Putin and his invasion of Ukraine.

The former president condemned the invasion though pointed out that his successor in the White House all but made it inevitable in the aftermath of the disgraceful panicked flight from Afghanistan and the abandoning of billions of dollars worth of military equipment to the Taliban.

Furthermore Trump observed that due to the Biden Administration’s devotion to the eco-cult the more Putin destabilizes the oil market through the invasion of Ukraine, the more money will fill the Kremlin’s coffers.

Trump was warmly received by the packed auditorium and once again hinted at a potential 2024 run though in no way commiting himself to the endeavor.

While Trump’s speech was extensive in topics covered and length, the former president’s tone was not as fiery perhaps seeking to strike a different chord in light of world events.

“America’s Senator” Brings Them to Their Feet

Introduced via hype video heralded with the words “America’s Senator” and containing a segment where he says a decidedly unkind word about “Karens,” US Senator John Kennedy received a thunderous ovation as he took the round “non-binary” stage.

Kennedy, who is up for re-election this November, received numerous enthusiastic standing applauses throughout his one-liner laced address and was greeted by a throng of well-wishers at the conclusion of his speech. He proved so popular with attendees that when President Trump rattled off the list CPAC of speakers he liked his mention of Kennedy generated a raucous reaction that made a visible impression on the ex-president.

With his profile raised through numerous appearances on cable news programs, don’t be surprised if Kennedy is tapped to deliver the keynote address at the 2024 Republican National Convention.

Something that has been noticeable at these past two CPACs was US Senator Rick Scott’s media availability as the Florida US Senator visited with sundry conservative media outlets in contrast with his fellow Republican members of Congress. While not the leading Floridian presidential hopeful, Scott appears to be making a concerted effort to spend time engaging with center-right journalists. Though not as well-known nationally as Ron DeSantis, Scott has proven to be a formidable candidate winning tough races for governor and US Senator.

To nobody’s surprise, Trump handily won the conference’s signature straw poll, garnering 59%, yet another indication that Trump would win the GOP nomination in a walk in the event he runs in 2024. Trump exceeded his share from the 2021 CPAC presidential straw poll, where he received 55%.

But not far off in the hearts and minds of conservative activists is Florida governor DeSantis, scoring second with 28%. It should be noted that DeSantis has done little to promote his potential presidential candidacy as he’s seeking reelection as governor this November.

But in another validation of his popularity with the right, DeSantis overwhelmingly won the secondary poll question about the 2024 race sans Trump, receiving 61% with former Secretary of State Mike Pompeo running second with 6%.

And as a Trump v DeSantis race looks highly unlikely, Trump will continue to consume the political oxygen on the GOP side until the former president definitively removes himself as a potential candidate.

And given his affinity for CPAC, don’t be surprised if Trump makes his 2024 intentions known one way or the other at next year’s event.