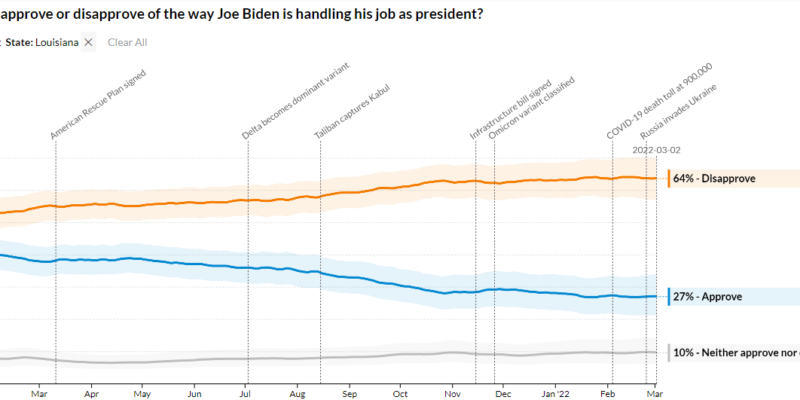 This was on Jesse Watters’ show last night, so you’ll wade through some of Watters’ commentary about the State of the Union speech before he brings Kennedy on. Not that any of it is inaccurate or boring, it’s good. But the point Kennedy makes is what’s most of interest here, and it really needs to be fully understood.

We’ve been talking about this for a year. We’ve said that Biden’s energy policy is treason. Taking America from status as a net exporter of oil to a net importer, then watching the price of oil skyrocket without reversing your policy to increase domestic supply while going begging to Russia and other countries who hate us for more oil, is a level of failure which can’t be explained by simple stupidity.

It takes more than incompetence. It takes bad faith to go with it. Sheer incompetence would have made this mess and then hustled to reverse the policy which caused it. Biden has persisted in regulating domestic oil to death, he’s had his minions do everything they can to sabotage offshore oil exploration, which we’ve discussed, he’s interfering with the transportation of natural gas.

We are buying a half million barrels of Russian oil per day. The Keystone XL pipeline would have facilitated some 800,000 barrels of Canadian oil coming into this country per day. That supply would have increased our export capacity and allowed us to displace Russian oil in European markets.

And Biden won’t sanction Russian oil while he brags about tearing apart the ruble and the Russian stock market as part of his retaliation for Putin’s invasion of Ukraine.

Why? Because we’ll have gas lines and $150 oil if he does that. And if the situation ends up that dire, there is no floor for Biden and his party this November. They’ll get wiped out in the midterms so badly that the Democrats might go the way of the Federalists and the Whigs. That sounds impossible, but it isn’t. Not if he puts America into an economic depression.

The Atlanta Fed is already forecasting first quarter economic growth of zero percent. Zero. This after Biden has traipsed around bragging about seven percent fourth-quarter GDP growth, a figure which looks impressive until you realize the government grew by 16 percent and inflation was at eight percent. Let oil go to $150 a barrel and that zero forecast might be optimistic.

So we’ll punish the people of Russia by destroying their currency and make it worthless, somewhat like Biden is punishing Americans and making the dollar worthless with his own destructive domestic policies, but we won’t punish Putin by cutting off his oil sales. Therefore nothing we’re doing to Putin will stop him from shooting ballistic missiles at apartment buildings or starving children in Kharkiv. He’ll do that until Ukraine submits and he really won’t care about the domestic consequences. He can afford to because he runs a police state.

The implications of governments destroying the personal finances of people based on their identity never once made it into the State of the Union speech. We now know that the American federal government is capable of blocking access to the bank accounts of foreigners who have committed no crime, without so much as a court order or a warrant, just because that government decides they don’t like them. And we’re supposed to believe this is a good thing because it’s being done to Russian oligarchs.

And yet we won’t stop importing Russian oil, the only thing Putin really cares about.

On a somewhat related subject, the minor Democrat candidate resembling an alpaca who’s attempting, badly, to run against Kennedy this fall is now attempting to tie him to Putin.

Russia’s invasion of Ukraine has given Luke Mixon an opening to invoke his past as a Navy fighter pilot to try to gain traction in the early stages of his uphill campaign to unseat U.S. Sen. John Kennedy.

Mixon, a Democrat, points to criticism that Kennedy and six other Republican lawmakers on a July 4, 2018, visit to the Kremlin gave Putin a pass for meddling to help elect Donald Trump as president in 2016.

You don’t have to read that article; it’s a stupid piece even by Tyler Bridges’ standards. Mixon is grasping at straws trying to paint Kennedy as a traitor when it’s his own party’s policies which are fueling Putin’s invasion of Ukraine. Literally. And the Alpaca’s political braintrust, who are John Bel Edwards’ old minions, don’t have anything to say about the fact Edwards has been at war with the oil industry the entire time he’s been in office – if Kennedy has Vladimir Putin problems, why doesn’t Edwards?

What this comes down to at the end of the day is that the Democrat Party has become such a repository for people not only uncommonly moronic but grossly at odds with the interests of ordinary folks that a political extinction is possible. Desirable. Necessary.

Kennedy isn’t saying that. He wouldn’t be wrong if he did.

By the way, if Mixon thinks parroting Team Biden’s accusations that Republicans who see through the stupid Russia narratives to recognize the real problems are tantamount to traitors, maybe he ought to look at some polls. Because you won’t make much of a majority running as Alpaca Biden. CIVIQS’ latest survey of Sundown Joe’s approval in Louisiana isn’t encouraging…

With white voters, who are the only ones Mixon can get because Gary Chambers is going to annihilate him among black voters, Biden’s approval is only 11 percent, with 83 percent disapproval.

If Luke Mixon wants to avoid abject humiliation, he might want to stop smearing Kennedy as a Russian traitor and start criticizing Biden for the damage he’s done to oil and gas jobs in Louisiana. But he won’t do that, because a Democrat isn’t capable of anything like the truth in today’s America.