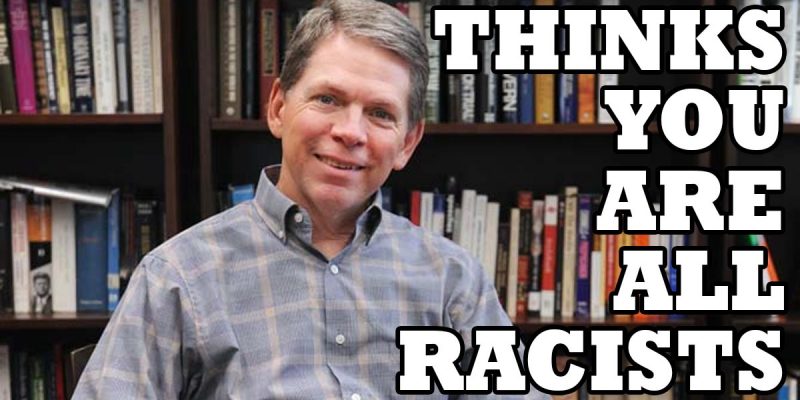 So Bob Mann has vaulted back into the news once again. He posted the following remarkable tweet on Monday…

As a former political reporter and press secretary to several Democrat senators and a governor, Mann’s political stripes should not be hard to spot. More problematically, he currently holds a professorship at LSU’s school of journalism, where he teaches aspiring young journalists, presumably when not spewing ideological invective on twitter rants.

Now, this would not be the first time that the good professor has managed to offend a large number of people with his writings. However, I am not aware that he has previously managed to so viciously insult over thirty-four million of his fellow Americans (a million of whom are fellow Louisianans), in a single twitter rant. This must be some sort of new personal record, which is unfortunate for him but even more so for the university he represents.

Long gone are the days when university professors strolled through their class halls naturally radiating an air of dispassionate dignity. Their political views and opinions, if known at all, were left out of the classroom for the simple reason that teaching at the college level was never about transmitting one’s personal views to the students. No, those professors fully imbibed and protected the twenty-five hundred year old Western concept of academia, which has always valued freedom of inquiry far above rote learning. And that system responded by driving mankind’s fantastic advances in knowledge over the last several hundred years.

But alas, the Western concept of academia, for which this country built the most powerful and effective higher educational system in world history, has begun to totter after more than a century of Marxist assault. Too many of our colleges and universities have for all intents and purposes resorted to a system of rote learning, even as they falsely claim to promote free inquiry while allowing nothing of the sort in the classroom. As leftist professors indoctrinate students too oblivious or intimidated to complain about a system which is depriving them of the greatest opportunity they will ever have to expand their horizons, the students, the university, and society at large all suffer. It remains to be seen whether our nation’s intellectual life will ever recover.

Which brings us back to Bob Mann, who is currently preaching left-wing political ideology from the Manship Chair in Journalism at the state’s pre-eminent public university. The operative word here is Journalism, because Mr. Mann does not teach political philosophy. He teaches Journalism: You know, that branch of learning involving the investigation and reporting of events using the most objective standards that we humans can humbly attain. And you cannot teach in an objective way, nor will you be perceived as such, when you tweet such insulting blather from a professor’s chair in a major university.

Allow me to briefly digress to point out that the Republican Party, the organization which Mr. Mann so brazenly conflates with the KKK, has been fighting uninterruptedly for minority rights for nearly one hundred and seventy years. The Democrat Party, whose elected officials Mr. Mann so loyally served for several decades, furnished virtually all the Klan’s membership even as the Klan’s minions burned crosses and committed far worse acts of terrorism across the country for over a hundred years. Surely, that in itself must call for act of contrition from Mr. Mann.

Let me now call for an apology from Mr. Mann to Republicans everywhere, but particularly those residing here in Louisiana, for the harsh and inaccurate comments in his recent tweet. And if he will not make this apology for his own sake, let us hope he will do so for the sake of the great university he represents.