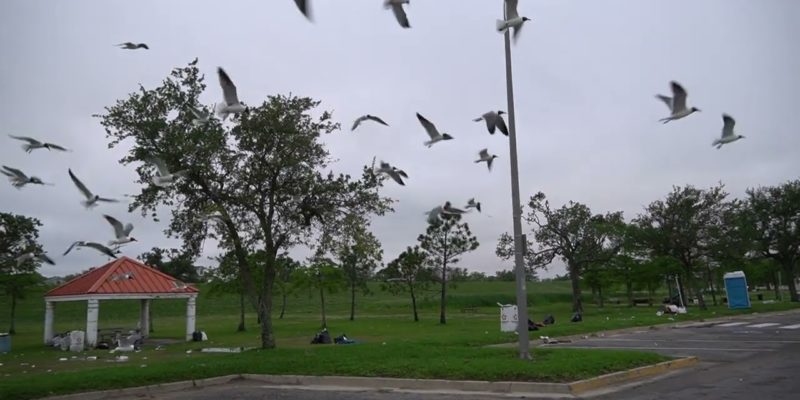 In 2020, I was building a Self-Guided Tour App titled “New Orleans Insider Tours.” On the night of March 17th, a friend sent a text suggesting I visit the COVID-closed French Quarter to take pictures of an unoccupied French Quarter for the app.

While taking the pictures, I stumbled across scores of rats feasting on trash on Bourbon Street. The video went viral of Facebook with international media using it. History has repeated, with pictures and videos of seagulls eating 10 tons of Easter trash on Lakeshore Drive going viral and over 1.5 million people being reached from the ten thousand shares. Local and state media soon were sending messages to the Facebook page: “Protect the Louisiana Brown Pelican at New Orleans West End.” News stories quickly aired.  Estimates are over 10 tons of trash was left on Easter Sunday along both the seawall and in the 6-mile-long park at Lake Pontchartrain. .

Easter Sunday traffic was stopped going onto Lakeshore Drive around 3:30pm. As I walked in and stopped to talk to a Levee District officer, he advised the Levee District is short offers (New Orleans by some estimates is short 500 officers). He noted that in 2021, between 3:30 and 4:15pm, three events happened: cars were doing burnouts, a fist-fight in the picnic area, and a shooting on the levee. He stated traffic was so congested, response vehicles could not enter.

He added that numerous complaints came from the neighbors near the restaurants on Lakeshore Drive. After closing hours, many people have turned the parking lots into late-night gathering places with music coming from car stereos.

The Levee District realized that with the new one-lane entrance, traffic was going to back up trying to enter on Easter Sunday and event response vehicles were going to be challenged to enter.  I parked and walked in from Lakeshore Drive along the lake to Canal Blvd.  Based on the crowds and having seen the trash left at the lakefront from previous weekends and holidays, I could tell Monday morning was going be alarming. The 80 pictures and 6 videos I took show that I was correct. By Monday afternoon the story had gone national.

The New Orleans City and Jefferson Parish Councils want to re-open the four acres at West End into to a multiuse facility. In January 2022, a resolution was passed allowing for high-density housing. City Council Member Joseph Giarrusso and Parish Council Member Jennifer Van Vrancken have envisioned restaurants re-opening at the old Fitzgerald’s site, which is now inhabited by a pelican colony.   However, with the new 20’ high hurricane evaluations required, building into the lake prohibited, 20 days a year lost to flooding, and shortage of New Orleans police officers this idea seems likely to better be suited for the Bucktown Marina leaving the small space on West End for marina parking, a museum on hurricanes and coastal protection, and a nature preserve.

New establishments such as Community Sailing and JB’s Fuel Dock have already placed parking demands on the remaining parking spaces with more and more boathouses becoming year- round homes. Proposals for development have omitted these issues in their “challenges” sections. The nostalgia of forty-year ago dining memories seems to cloud the reality of today’s math, science, and wildlife preservation needs.

A century ago, Spanish Fort was developed before Sicilians from Ustica moved the entertainment district moved to west end. Now it is better to “Protect the Louisiana Brown Pelican at New Orleans West End” and develop the larger space at Bucktown which would allow restaurants over the water. This would allow New Orleans time to fix its current police shortage challenges before adding a new space requiring more officers.