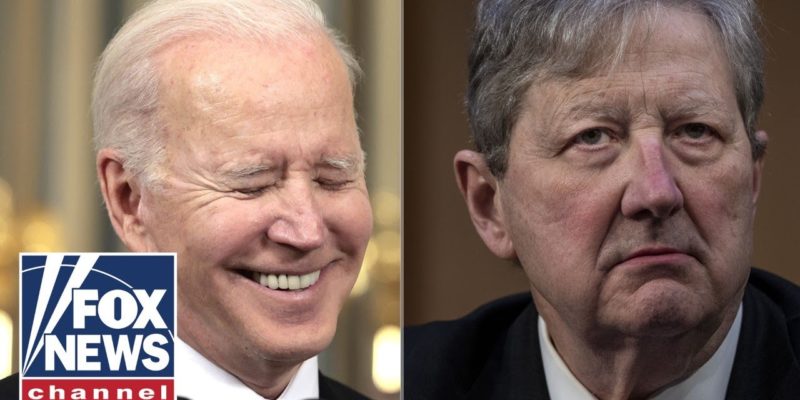 This is a pretty good takedown of the Biden administration, but not just because John Kennedy, Louisiana’s junior senator but its superior one, uses some quite colorful language to do it on Laura Ingraham’s show last night. Kennedy is making a real point here in not so many words.

He starts off noting the blinding incompetence of Joe Biden, which has been apparent since the 1970’s but has morphed into a threat to our national security given the latter’s manifest mental degradation (which was on technicolor display yesterday). But as Kennedy said, not everybody in the Biden administration is a moron. So incompetence alone can’t explain the miserable performance of the regime.

Instead, he says, the administration is full of “wokers,” hardcore leftists who hate America and everything about us from George Washington to Mr. Potato Head, and “want to beat the crap out of” the country.

Which is a very folksy way of saying that none of what you see is a particular accident. It’s purposeful.

We talked earlier this week about the phenomenon on a local level, and in particular the Democrats’ practice of Weaponized Governmental Failure. Namely, that you engage in policies designed to make a city unlivable for its middle class voters precisely so that you can run them out of town to the suburbs, and create demographics perfectly favorable to a permanent one-party government comprised of a huge underclass dependent on government and a skim of woke urban rich who pay a la carte for city services which ought to be covered by taxes. The middle-class voters who insist on honest, cost-effective government producing real social goods find themselves outvoted, and soon decamp for the suburbs, taking with them any chance of Republicans getting elected and supplying some political balance.

Weaponized Governmental Failure is standard practice of today’s Democrat Party, which barely exists outside of major urban areas and a few college towns. So the “wokers” Kennedy talks about can’t govern an entire country – you aren’t going to run the middle class out of America like you can run them out of St. Louis. Not to mention that while on the local level you can get Community Development Block Grants from the feds to offset the loss of your middle-class tax base, when you try to draw down free money at the federal level you get six-dollar gasoline and sky-high crime and homelessness and misery.

And that’s the downside to having them in charge of the federal government. You have to deny them political power if you want to keep all their attendant horrors at bay.

Interested in more national news? We've got you covered! See More National News
Previous Article SADOW: Get Ready To Get Soaked By The Climate Change Nuts
Next Article GARLINGTON: Riverbend Elementary Could Lead The Way To Restoration