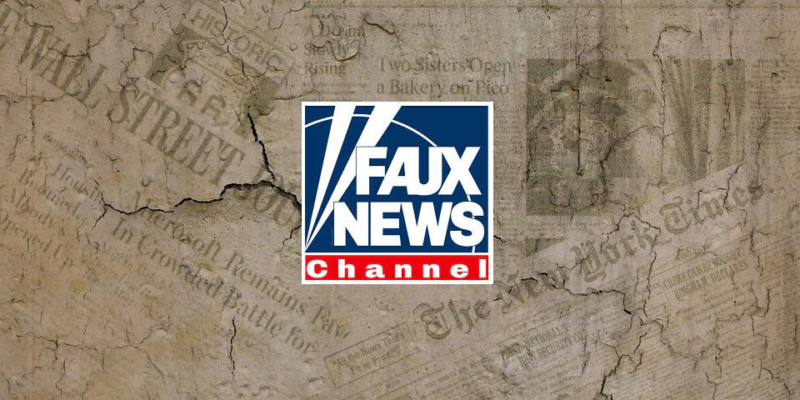 Dog bites man: A major network news company published a softball of a story greatly favoring one candidate over another in a Central Texas legislative runoff.

In the blog-driven, rolling deadline, drive-by media environment we find ourselves in this careless display of editorial laziness has become all too common.

But here’s what makes this a man bites dog scenario and a depressing commentary on the decline of the veracity of cable news networks. This was not a left-leaning mainstream media favored a progressive liberal over a conservative candidate like we see pretty much all the time. It wasn’t a matter of a moderate centrist running against the more conservative candidate in a race for the GOP nod. Nor was it one of those “pink slime” pay-for-play platforms that pose as legitimate news sources.

Sadly, this was FOX News.

The article, dated April 21 and several weeks following the Texas Primary, favored one of two Republicans who made the runoff. Both have spotless records, solid GOP resumes, and a hair’s breadth of differences hinted at only by campaign finance report analyses.

The featured candidate, Caroline Harris, was hailed in the article as the great Millennial hope — a young female “driving force” behind “sweeping legislation” to ban abortion and critical race theory.

Her opponent, Patrick McGuinness, and though he led a four-way pack in the March primary, ran for Texas House in 2010, and is no stranger to the local political scene, may as well have been the Green Party nominee the way he was barely mentioned. McGuinness finished with 35% of the vote to Harris’s 31% in March.

Whether Harris’s slow pitch hit will shift the balance in Tuesday’s (May 24) Texas Republican Primary Runoff has yet to be seen. The winner of Tuesday’s GOP runoff for Texas House District 52 will face Democrat Luis Echegaray in the November general election.

ANATOMY OF A PUFF PIECE

“You Decide™” whether the article in question favors Harris or simply tells readers a timely story about a member of Generation Y running for a legislative seat:

“In the past two years, Texas has passed sweeping legislation on issues ranging from abortion to critical race theory to election integrity. The woman who was a driving force behind them, 28-year-old Caroline Harris, is now running for Texas State House District 52.

“Young politicians are a rarity in Texas. At age 28, Harris is just beating out [Democrat James] Talarico (elected to office at age 29 in 2019) for youngest representative in the Texas House and is a few years behind legendary representative Sam Rayburn (D), elected to the State House at 24.”

The former copy editor in me notes the following:

But the facts are technically correct. Enough with the editorial nit-picking. Now for some more audacious problems

McGuinness was mentioned not only “below the fold” (as the old saying goes regarding a broadsheet newspaper) but underneath an advertisement at the tail-end of the mobile version of the article.

Worse: a follow-up article on McGuinness (and forget about that Echegaray guy) has yet to be seen.

No one can blame Harris for running with the complimentary description of her candidacy. Here’s how it appeared in one of several campaign mailers: 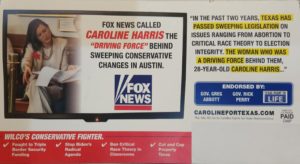 The source of this mailer tells The Hayride it was received April 30 — nine days after the article was posted to FOX. That’s a fast turnaround for design, processing, and letting the USPS do its thing, but it is possible.

The context-deficient article was immediately posted to social media and quickly appeared in social media searches as a promotion. I asked via a Facebook comment if the reporter was in the business of writing favorable content for candidates (there are several embattled Austin Republicans who may greatly benefit from that same treatment). I learned quickly that the writer (not a reporter — see more on that below on this important distinction) runs in many of the same young conservative circles as Harris, particularly in Williamson County in the northern portion of the Austin area. 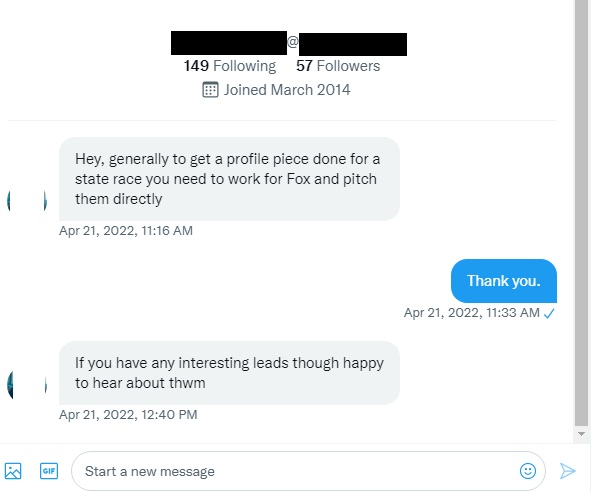 (Translation: Sorry, folks! You’ve got to have an official employee badge like mine in order to pitch a story idea. Come back again sometime, though.)

The writer, I was told by a campaign worker, contacted Team McGuinness for an interview soon thereafter. McGuinness waited and waited … and waited. It was long enough for Team Harris to release several push cards and mailers and too late for McGuinness to produce and mail out a FOX feature of his own.

HOW DID THIS GET THROUGH?

The writer of the Harris piece is not a reporter or an editor but a production assistant for FOX. He has one (1) article listed under his hyperlinked byline (yes, the article about Harris).

This particular production assistant seems to have a background in constituent communications and in content development for numerous entities. According to a job listing in the Austin area for a “freelance production assistant,” a bachelor’s degree is necessary but no reporting or news-editorial background. The job entails “cut[ting] video from FOX News Channel & FOX Business Network shows for use on FOX News Digital platforms & YouTube” among other duties.

This may explain why the article was not on the level of a “FOX News alert” or a hard news story on the main FoxNews.com site, but on a subsidiary product.

Readers, however, are not by-and-large able to tell that difference. Nor are those casually scanning a campaign mail piece before tossing it. All they know is that FOX gave the stamp of approval to Caroline Harris.

FOX TAKING TURN FOR THE WORSE

Eat your heart out, CNN+. FOX is right there behind you if it doesn’t get its act together and fast.

“Objectivity” is what they used to call this careful discipline that used to be the motto of FOX News. That’s the prime directive for traditionally trained journalists, but I cannot speak for production assistants and online content creators.

In a nutshell, objectivity means you give candidates equal space in your written story if at all possible and if the context demands it. In the case of the Harris article, even if the focus was a young millennial female candidate, mentioning her well-known opponent in the first paragraph or two and a link to his campaign site would have been fair game. Writing an equally glowing story about McGuinness under a separate headline would have been even more appropriate.

Speaking of fairness: I’ll readily admit a conflagrant editorial in The Hayride doesn’t often follow the traditional journalistic rules of engagement. We make no secret of our rightward orientation nor of our preference for candidates who actually work to reduce the size and scope of government. Nor do we pay a staff of full-time writers and desk editors. We’re mostly in the commentary game, though we try our best to be fair in our dealings. But unlike Fox, our slogan was never “We report, you decide,” nor do we claim to be a standard news outlet or the conscientious counterbalance to the mainstream media. We’re “Southern Politics & Culture.” Apples and oranges there.

We would only hope that a laudatory Hayride headline and our logo would find its way to a campaign mailer and help elect the candidate most loyal to constitutional principles. But, again, that’s us.

Now FOX has entered the game of picking and choosing winners and losers even in local legislative races — and at the behest of content creators, at that. If this continues it would be a major step down for a network that is already under intense criticism for deviating from its core, conservative audience.

At the time of publication there is 11 hours left until Tuesday’s Runoff. Still no FOX story putting McGuinness in a favorable light. Although roughly half of voters wait until election day to cast a ballot, it’s far past the time it would take to crank out a printed mail piece balancing out the equation of tilted media coverage.

FOX can do better. We know it can, and they continue to do great work where the proper editorial functions are at work and in place. Until then, this is exactly why blog commentary exists — at the very least to keep glorified content writers in check.

Disclaimer: I’ve known McGuinness for more than a decade in our work with the Travis County Republican Party. It also happens that Harris’s boss, Sen. Bryan Hughes, is a political hero of mine (Harris works as an office manager and policy analyst in his Texas Capitol office). I will gladly support whoever wins the runoff. I will also give any FOX headline increased scrutiny from here on out. “Sorry, folks.”

Interested in more news from Texas? We've got you covered! See More Texas News
Previous Article MONKEYS & MULES: The #Monkeypoxalypse May Be Coming to a Town Near You
Next Article HOLTON: Getting it right on Critical Race Theory