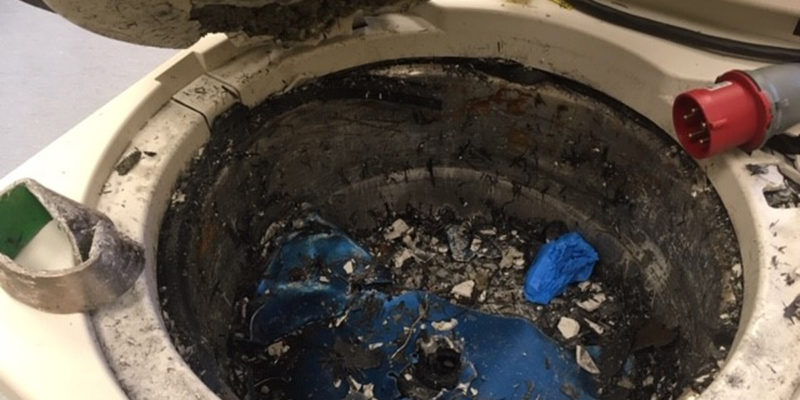 If the centrifuge analogy doesn’t grab you immediately, let us help,,,

We particularly like this video to make the analogy because, thankfully, the adults stepped in to stop things before that merry go round started spitting kids out all over the place.

In any event, you know without needing to see video proof that any centrifugal device, whether it’s a washing machine, a spinning top, a merry-go-round or a machine processing uranium into nuclear fuel, is a potential hazard to spin itself apart if it’s improperly balanced.

And there is absolutely no balance in today’s Democrat Party, which spins faster and faster without any regard to the effect it’s having on the country and even itself.

We could go on forever with examples of this, but here are just a few.

How about Joe Biden? The monsters behind the scenes in the Biden regime sent him out this week to placate the nation over inflation, and it’s fair to say that didn’t work. Michael Goodwin at the New York Post had a good piece talking about that…

…the White House had to know there was no chance the president’s “I care” appearance would make much of a difference, raising the question of why he bothered. One theory is that the inflation data that comes out Wednesday will be more bad news and Biden’s team saw an advantage in getting ahead of it by having him tell voters he really, really feels their pain.

That’s not much of a reason, but the decision to go ahead shows how the administration has hit a wall of its own making. Even with the tanking stock market and growing belief that the Federal Reserve’s planned interest rate hikes will throw the economy into a recession, Biden seems unable to change course and adopt policies that could help tame inflation and earn him and his party a second look from voters.

For example, despite the fact that many economists believe the massive government spending during the height of the COVID war, including $2 trillion spent last year, was a major cause of the surge in consumer demand and prices, Biden continues to push for more spending that would add to inflation pressures.

Then there’s the issue of energy supplies and the resulting price of oil being stuck around $100 a barrel. If the president were to flip-flop and make a serious push to increase production, he would face a revolt within his own party.

Many Democrats actually wouldn’t mind if gas prices hit $10 a gallon because, they believe, that would hasten the move away from fossil fuels. Such is their devotion to the devil in their Green New Deal that the problems people face here and now don’t matter to them.

The smart political and economic play where inflation is concerned would be, to follow our analogy, slowing the centrifuge down and trying to rebalance it. Energy prices are off the charts because Biden has hamstrung the domestic producers, so you lift the regulatory and other restrictions and let them do their thing, and you’ll find that supply will rise to meet demand.

But if you don’t do that, and Team Biden can’t because the centrifugal force the climate change nuts on the Hard Left are applying to this administration and the Democrat Party won’t allow it, those energy prices will rise and rise, and with them the price of everything requiring energy will similarly skyrocket.

To illustrate just how captive to the centrifugal force of the Hard Left this regime is, amid gas prices going absolutely through the roof Team Biden actually canceled a couple of offshore oil leases in Alaska and the Gulf of Mexico it had been dragged into scheduling. That drove Rep. Garret Graves absolutely up the wall, leading to a furious statement he put out this morning…

“The Biden Administration’s announcement that they will cancel new offshore oil and gas production approaches levels of irresponsibility and reckless stupidity never seen before. We are paying record prices for gasoline and to heat and cool our homes. Rather than using American energy sources to help solve the problem and lower prices, the Biden administration continues to carry out policies that only benefit Russia, China, Iran, Saudi Arabia, Venezuela, and other apparent allies of this White House. It is past time for the administration to put Americans first. This is the only administration in modern history to not issue lands and waters for oil and gas production. Not only is this illegal, but it is hurting families across the country.”

Most Americans completely get the cause and effect here. Those who don’t will at least understand the effect – fuel costs are through the roof and they don’t have money for basic necessities as a result – and look at the doddering fool in the White House and figure it has to be his fault. After all, gasoline was under two bucks a gallon when the orange guy left office.

And the public will get more and more unruly, which will mean more attempts to send Biden out to placate the masses. Goodwin had another good description of how capable he is to settle things down…

The president set himself an easy task Tuesday — to show a dispirited public he cares about their painful straits. As he put it, “I want every American to know that I’m taking inflation very seriously and it’s my top domestic priority.”

Just not seriously enough to bring a single new idea to the table. Instead he fell back on tired tropes about how none of the historic increase in prices is his fault.

With Biden, the buck always stops somewhere else.

The two straw men he trotted out were familiar — the pandemic and the Putin Price Hike. The latter coined phrase is as ridiculous as President Gerald Ford’s WIN gambit, for Whip Inflation Now, and will no doubt be just as effective economically and politically.

Asked by a reporter after his address whether he accepted any responsibility for the crisis, Biden said no, adding: “I think our policies help, not hurt.”

Saying so doesn’t make it true.

Nor was it credible for him to claim, again, that there is rampant price gouging by oil and lumber companies and beef distributors.

As usual, his performance was marred by a halting, stumbling delivery as if he were reading his speech for the first time. An even bigger problem is that his argument is no match for the reality Americans see and feel.

Then there’s this crisis at the Supreme Court, which was set loose when, we think, one of the law clerks for the leftist justices leaked the draft opinion in the Dobbs case overturning Roe v. Wade and bringing abortion back to the states to decide. Whoever the leaker was, that action upset the balance of the centrifuge and sent hooligans out to make death threats and demonstrate in front of conservative justices’ homes in an effort to intimidate them into changing their vote on Dobbs.

Again, the obvious call here would be to slow down the centrifuge and get a lid on the insanity. It’s illegal to demonstrate in front of a judge’s home in an effort to intimidate or otherwise influence judicial decisions. Send out the law to break up those protests, and then you don’t have the justices’ families fleeing for the hills in fear for their lives. That isn’t a good precedent, you know, because eventually people on the Right will see that and conclude that the New Rules permit that kind of behavior and engage in it themselves.

But what does Team Biden do? The opposite. Amid a bizarre and grotesque spectacle of poking out her tongue while talking, Biden’s outgoing press secretary Jen Psaki actually defended the demonstrators as “peaceful protesters,” a tacit encouragement of political violence perfectly in keeping with the Democrat Party’s encouragement of the summer 2020 George Floyd riots.

The likelihood that this results in a Supreme Court justice’s assassination isn’t huge, but it isn’t zero, either, and that’s simply not acceptable. The effect of such an occurrence, particularly if Team Biden were to respond to it by trying to replace a murdered conservative justice with another Ketanji Brown Jackson, could be very destabilizing.

Again, we’re not predicting this will happen. We’re just emphasizing the magnitude of the responsibility the White House has not to fuel the chaos the leak of this opinion has caused. That leak has given motivation to a would-be assassin to kill a conservative justice right now, before the Dobbs decision is finalized, so as to change the balance on the court. That they aren’t doing it shows how this thing continues to spin, unbalanced and out of control.

The blamecasting and demonization is something else with the Broken Centrifuge Party. Biden is running his mouth about “ultra-MAGA” zealots who somehow are out to ban interracial marriage and birth control pills, when he’s not out trying to start a nuclear war with Russia, and meanwhile there’s a shortage of baby formula across the country. Except if you’re an illegal alien, because the administration ships pallets of formula to them.

And his Senate stooge Chuck Schumer brought a bill yesterday purportedly “codifying” Roe v. Wade in federal law. Schumer was hoping that this would be his big chance to end the filibuster, but the whole thing crashed and burned.

Charles Schumer failed to “codify Roe” into law, managing to solidify a bipartisan majority against him. The bill lost 49-51, all Democrats except Manchin voting aye, all Republicans plus Manchin voting no. Note that Sinema voted for the ultra-abortion bill.

“Codifying Roe” is a misnomer, as the bill he introduced is far more extreme than even the judge-made rule of Roe is. The pro-abortion bill that 49 Senate Democrats voted for is absolutely blood-thirsty and guts-hungry, even by abortion-hawk standards: It would have overturned all state restrictions on abortion, making abortion (including partial-birth abortion) legal in all states until the moment of crowning, and would have demanded that Catholic hospitals perform abortions no matter what their religious objections.

Oh, and it specified that abortion was a right belonging not just to women, but to “transmen” and “non-binary” individuals as well.

Collins and Murkowski proposed an abortion bill they could have supported by Schumer refused to entertain it; he did not want to water down his bloody bill. What he wanted was an issue, not a solution. He didn’t want a bill that any Republican could vote for; he wanted to be able to say “The Ultra-MAGA crowd all voted against this.”

Spin that centrifuge faster and faster, regardless of how much stuff is falling away. Spin it until the chaos is complete.

They can’t stop. It has to be the rest of us stepping in to stop it.

Interested in more national news? We've got you covered! See More National News
Previous Article APPEL: Fentanyl And The Border
Next Article HAIK: What I Said To The Senate Health & Welfare Committee Yesterday