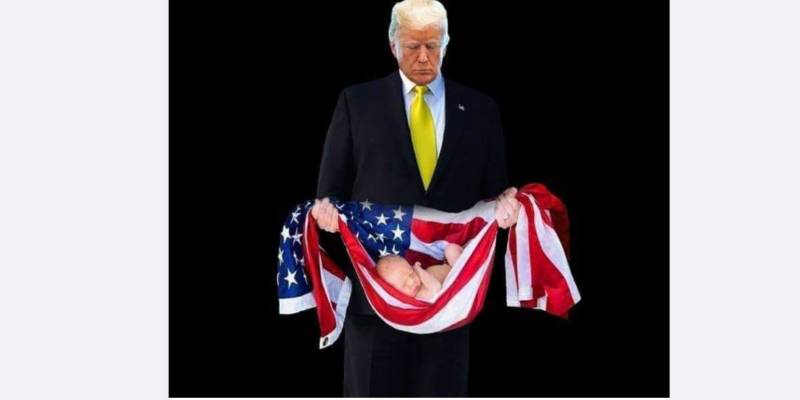 As one YouTube user put it, “Even if you don’t like Trump, how in the world is it possible not to like the work done to end human trafficking???!!!!”

Yes, there were downvotes, many many of them, for the videos I will present later in this article today.

And so many people think that wall at the southern border is only about drug cartels and free votes for the Democrats.

On October 8, 2012, not-yet-President Donald J. Trump somewhat-mysteriously tweeted, “Got to do something about these missing children grabbed by the perverts. Too many incidents – fast trial, death penalty.”

Citizen Trump was onto the pedophiles long before his date with destiny in 2016. Connect that with the fact that everyone he once rubbed elbows with as an everyday American turned on him instantly when he announced his bid for the Presidency in the summer of 2015.

If you connect just a few dots, it isn’t difficult to see one reason they tried–and are still trying–to destroy him.

I would link Trump’s Twitter account if I could to show that telling tweet from 2012, but the reader will kindly have to trust me. After all, as you likely know, Trump was banned from the social media giant after January 6, 2021. I’ve pulled the tweet up a dozen times in the past to show people wanting to know the truth, and it’s cited here in this 2017 article from Townhall.

“Got to do something about these missing children grabbed by the perverts. Too many incidents – fast trial, death penalty.”

In a not-so-unrelated story from 2009, Florida attorney Bradley Edwards claimed that Donald Trump was the only person who provided assistance when Edwards served subpoenas and notices to individuals affiliated with none other than Jeffrey Epstein.

The only thing that I can say about President Trump is that he is the only person who, in 2009 when I served a lot of subpoenas on a lot of people, or at least gave notice to some pretty connected people, that I want to talk to them, is the only person who picked up the phone and said, let’s just talk.  I’ll give you as much time as you want.  I’ll tell you what you need to know, and was very helpful, in the information that he gave, and gave no indication whatsoever that he was involved in anything untoward whatsoever, but had good information. That checked out and that helped us and we didn’t have to take a deposition of him in 2009.

The fact that Donald Trump has been fighting so long against child sex traffickers says so much about the last ten years in our country.

Think about it. Put it together.

A mere cursory search on deep-state megaphone Google will deny up and down any truth to the idea that pedophilia (and worse) exists in places like D.C. and Hollywood. This denial alone from the same engine that tries to hide so much else from Americans–including the 2020 election steal–has been reason enough for millions of Americans to wake up to the truth to what is happening to our children.

And we are not even alluding to the children connected to abortion and Roe v Wade today.

No other President in history has done more to chase down the vile characters that live in this country, and world, for that matter. Mere weeks after his inauguration in 2017, he made the announcement that may help people understand why he was hated so violently by officials in government, the mainstream media, and the Hollywood elite:

“I want to make it clear that my administration will focus on ending the absolute horrific practice of human trafficking. And I am prepared to bring the full force and weight of our government … at the federal level, and the other highest levels, whatever we can do, in order to solve this horrific problem. [It’s] getting worse, and it’s happening in the United States–in addition to the rest of the world–but it’s happening in the United States, which is–terrible.”

January 30, 2020: Combating Human Trafficking and Online Child Exploitation in the United States (right in the middle of a second impeachment against him and the beginning of the COVID-19 drama)

In addition to these executive orders, Trump issued several proclamations observing human trafficking, including the formation of National Slavery and Human Trafficking Prevention Month every January.

Moreover, Trump dedicated a new White House position to combat the issue. He also spoke at the Human Trafficking Summit in early 2020:

Two bills signed into law earlier in October 2020, the Not Invisible Act of 2019 and Savanna’s Act, spotlighted the human trafficking prevention cause for missing and murdered American Indians.

Trump signed a total of nine pieces of legislation to commit to the war against human trafficking, both domestically and internationally.

It was even in the federal budget. His daughter Ivanka was a leader in the cause.

About his administration, he said it was “100 percent committed to eradicating human trafficking from the earth.”

I could go on and on and on with what President Trump did to end this most insidious evil.

And on and on. I’ll even link a left-wing USA Today fact check as evidence. If a fact-checker admits to all of this, can you imagine what more horrendous realities lurk below the surface?

Two more questions: If these genocidal maniacs do in fact roam the planet right down to our local neighborhoods, why is it that the mainstream media mocks those who speak up and calls them conspiracy theorists? Why do they belittle the MAGA movement who is still firmly behind their former President, a man who still continues to fight for the most vulnerable in our world?

As early as late February 2017, right after the first video above was posted, it became news (sort of) that authorities had arrested a never-before-seen number of criminals involved in child sex trafficking rings in our country. Roughly 1,500 children saved in a single month was one estimate. It should have been the biggest story in the mainstream media. Should have been.

But everyone reading this knows it wasn’t. The MSM was too busy damning conservative Milo Yiannopoulos instead of spotlighting the history-making story about the saving of the children.

Why would these people hide such huge, indeed Biblical, news? Why would they protect those involved in such a heinous act?

Who exactly controls the mainstream media?

Sometimes the questions themselves are the answer.

“Even if you don’t like Trump, how in the world is it possible not to like the work done to end human trafficking???!!!!

Think about it. Connect the dots. And if you know all of this already, or are just finding out, help someone who doesn’t know yet see the truth.