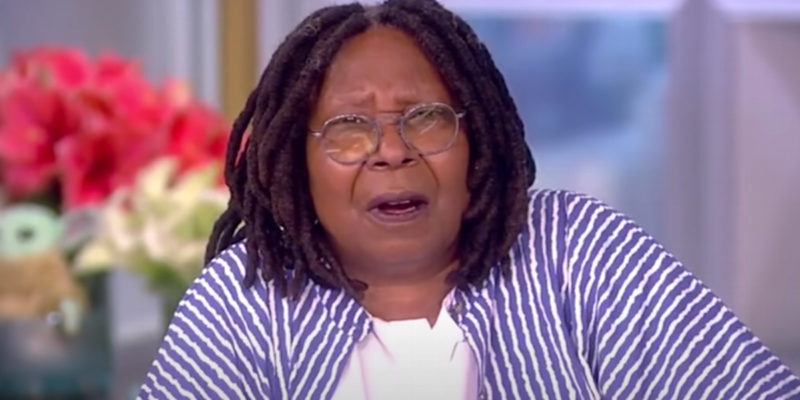 This might be the first and last time we’ll ever do anything at The Hayride on what the mindless harpies on The View have to say, but at some point the sting of the idiocy on that show even penetrates our determined disregard.

And we hit that point yesterday when Whoopi Goldberg, the aging, overrated comedienne whose career has been propped up almost solely as a result of her race and who hasn’t starred in a hit movie or show in close to two decades, purported to lecture the Archbishop of San Francisco as to Catholic doctrine.

Whoopi: "The archbishop of San Francisco is calling for speaker Nancy Pelosi to be denied receiving Communion because of her pro-choice stance … this is not your job, dude. That is not up to you to make that decision." pic.twitter.com/TCSe0t6XLY

This from the same moron who got herself suspended not long ago for essentially saying the Holocaust was no big deal because it was white people doing it to each other.

Everything about her remarks on Nancy Pelosi being denied Catholic communion was egregiously stupid.

First of all, it’s literally the Archbishop’s job to decide whether Pelosi is allowed to take communion. He’s the guy who runs the Catholic Church where she lives. And the Church’s doctrine is that abortion is a grave sin and an affront to God.

How can you call yourself a Catholic if you contradict the Church’s doctrine on the issue?

Which sounds an awful lot like how China handles the Catholic Church. That’s not a surprise seeing as though she’s openly shilled for China before.

And yes, communion is for sinners. We’re all sinners. The point of Catholicism is that you repent of your sins, take communion and are then remade anew. There is no redemption without repentance. Nancy Pelosi has had decades to repent of her advocacy for the killing of unborn children and refuses to this day to do so. It’s not complicated that she would thus be ineligible for redemption.

Whoopi Goldberg isn’t smart enough to understand this and she’s also not a Catholic, so she wouldn’t know it anyway. Not to mention that the corrupt Hollywood/entertainment media complex mentality that she mindlessly vomits every day on The View doesn’t allow for the idea that one can truly repent of sin. That mentality glorifies sin. The only sins it condemns are the sins of speaking truth which offends…some people.

And she can’t even avoid transgressing in that small space.

Ideally, Disney, the parent company of ABC on which The View plies its mediocre trade, would just cancel the show, or at least reboot it. Goldberg might not even be the worst of the morons on that air; the execrable dumbass Joy Behar is also belching hot air in that studio, and it’s not like Sunny Hostin (who?) is any mental titan, either.

But at the minimum, isn’t it time that Goldberg be sent packing? When you actively offend both Jews and Catholics within the space of less than a month, you’re beginning to become a liability.

Of course, Disney has nothing but liabilities these days. Maybe it’s Disney itself which is the liability and Whoopi Goldberg and her idiot-box morning show is just a symptom.