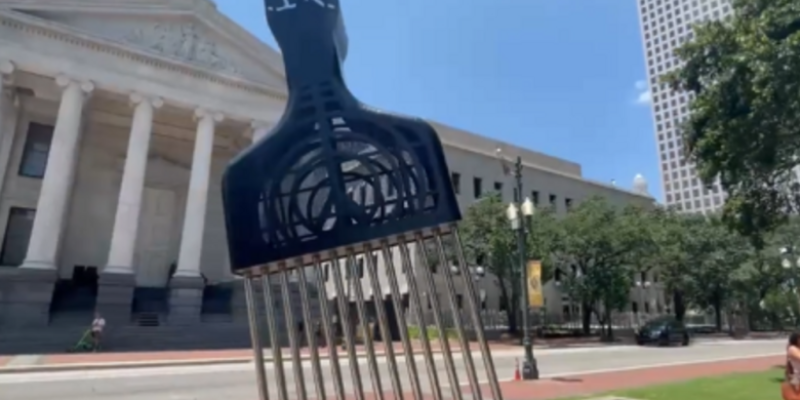 We wish this were “fake news you could trust.” But in New Orleans these days, up is down and down is up.

The report: A gigantic, 28-foot-tall hair pick with the infamous “black power” fist for a handle was unveiled in Lafayette Square in honor of Juneteenth–a holiday that celebrates the last American slaves to be freed.

The statue is titled “All Power to All People.” Our first thought was whether or not the Thought Police should inform us that this is racist. The phrase “All Lives Matter” is worthy of condemnation based on racist sentiment, after all. Our second thought was, gee, of all the contributions black Americans have made to society and to the city of New Orleans in particular, this was the best thing the city could come up with to memorialize a “relatively” important issue like the freeing of slaves?

If you’re going to honor something serious historically, it should warrant a symbol that more faithfully reflects it, should it not?

It takes your breath away, alright.

Given the fact that the statue was erected on the taxpayer’s dime, and given the fact that New Orleans’ murder rate is among the highest in the country, we don’t exactly assess this to be an optimal allocation of funds. Nor do we think it very well represents the dignity of the African-American community. Even as we write this article, we continue to have to remind ourselves that it is in fact real news.

So, because of such pesky cognitive dissonance, we want to present some semblance of sanity to this upside-down story–a brief history of the Afro pick.

The black fist Afro comb is an evocative symbol of the second half of the twentieth century. Coming into production at some point in the 1970s, the comb’s marriage of object and iconography was a perfect one. With its reference to the Black Power movement, and its historical links to the re-emergence of the popularity of the wider-toothed hair pick in the USA to serve the Afro hairstyle, , the comb has become more than simply representative of an era and a political affiliation. It also symbolises Black pride and identity.

During this period many African Americans sought to reaffirm their cultural identity by not straightening their hair to follow mainstream European fashions. The traditional ‘Afro’, which first emerged in the 1950s, is a style not a natural phenomenon: the hair needs to be cut in a certain way and maintained with a pik or comb. Because many types of African hair are tightly curled or coiled, a wider- toothed comb is a healthier way of grooming combing through the hair. For those who chose to grow their hair in an unprocessed state, the longer teeth of the pik were perfect for maintaining an Afro hairstyle. The earliest comb of this form to emerge was patented in 1969 by two African Americans, Samuel H. Bundles Jr., and Henry M. Childrey (Tulloch). It was not long before variations of this useful new tool began to emerge and be patented. This included the folding comb, the patent for which was filed in 1970 and granted in 1971.

Okay, enough of the American cultural history. Now back to the action. Mayor Cantrell sent out a second tweet, which, again, given the current tragedy that is the New Orleans streets, may make a taxpayer wonder what exactly is the point of it all. Or just get pissed off entirely.

Furthermore, in recognition of our local black and brown artists, we have dedicated $7.2 MILLION in bond funding to public art💥

➡️In addition, we have already purchased over 60 pieces of artwork created by local Black artists to be displayed in our public buildings👏💯 pic.twitter.com/Dlw35fXV4j

7.2 MILLION in all caps, just in case you weren’t excited enough. And all the cool emojis too. We’re stoked.

The reactions online show just how fed up many Americans are with these comedy shows traipsing around in liberal cities like New Orleans. This is not an issue divided by racial lines, either.

Fearless host Jason Whitlock had these choice words about LeBron James recently; his vitriol was a little more sardonic toward the good mayor of New Orleans: “Imagine being mayor of a major city, spending money on a monument that depicts the accomplishments of black people, and deciding on a hair pick. They would recall a white mayor for demeaning us. Instead, we’ll shout ‘Yaass Queen’ and pretend nothing is wrong.”

Author Darrell B. Harrison: “Because we all know how important it was for my ancestors to keep their afros lookin’ tight during those ‘struggles, fights, and protests.'”

The Hodge Twins: “The best their artists could come up with is a Black Power hair pick sculpture. You can’t fix stupid.”

Singer Vinnie James: “These Democrats posed in front of a giant AFRO PICK? An AFRO PICK? This is how they celebrate the freedoms black people have gained? I’m in hell. Right?”

Writer Rod Dreher: “The City of New Orleans just unveiled a giant sculpture of an Afro pick. This is a joke, but it’s not supposed to be. How humiliating for a city that has given humanity so much great culture.”

Writer Ellen Carmichael: “As New Orleans’ infrastructure crumbles and innocent people are being gunned down daily, Mayor LaToya Cantrell unveils a giant ‘black power’ hair pick in historic Lafayette Square. Her awful leadership is absolutely devastating for those with a history and love for this city.”

If you haven’t had enough comedy yet, here is another tweet from an “Andrew” that might make you chuckle:

We joke and we play, but seriously, what is going on here? Hard-working Americans are struggling to make ends meet, and this is the message of understanding you aim to send them? This is how you tell the people you understand that you work for them and will do everything in your power to make that taxpayer money somehow ease families’ burdens?

Or at least clean up the streets?

Optics is everything here. $7.2 million?

Yesterday The Babylon Bee was up to its typical tricks, releasing a piece entitled “Theologians Believe Jesus Slept Through The Storm On A MyPillow.” This is pretty funny stuff, and yet we cannot help but think it is somehow a sign from God telling us to just surrender and go to sleep through this shitstorm that is liberal America. Truly, only faith in God and his divine providence can fix some of these problems we have in cities like New Orleans, Louisiana.

In Scripture, the Hebrews claimed that the city of Babylon was named for the confusion that resulted from God causing the people to speak in different languages. Similarly, it has become wholly impossible to communicate with the far Left. They simply don’t speak the working American’s language.

And that there is real news you can trust.