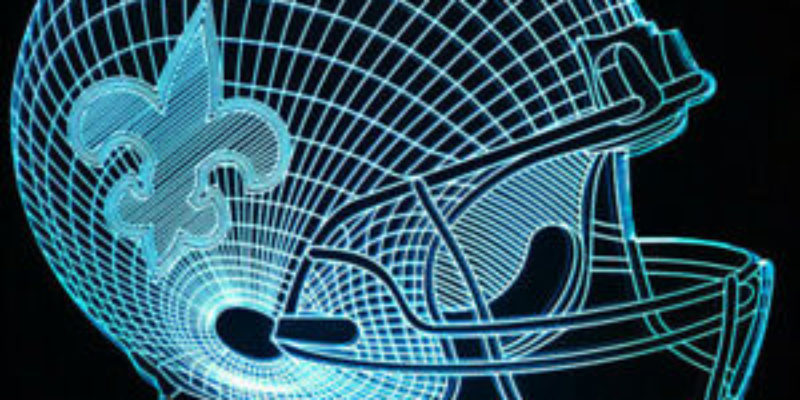 Yes, there are much more pressing issues to write about, especially when you’re dealing with the woke NFL, but a quick look at the New Orleans Saints’ alternate helmet won’t hurt anyone.

A little gem popped up as I was working on this story. The Saints actually have a brief history, a very brief one, with the black helmet:

Older Saints’ faithful may remember that back in 1969, then owner John Mecom Jr. had the team wear black helmets with a gold Fleur De Lis logo for a preseason game. The stripes on the helmet were also reversed as two gold stripes flanking a white stripe in the middle. It was a nice look that the team has not used since.

At the time, Mecom had not registered the uniform request change with the NFL, which took a hard line on their strict rule regarding such changes. The league dictated that the fledgling New Orleans franchise (in just their third season of existence) must return to the gold helmets.

I am part-traditionalist, part-geek who enjoys the occasional change to a uniform, as long as that change doesn’t splash too much color around. Liking clean lines, therefore, I find myself enjoying the idea of the Saints sporting these helmets for a game or two this season, supposedly for the contests in which they don those clean all-white color rush uniforms. Here is Cam Jordan pictured with the look:

I’ve never liked the stripe on the crown of the helmet that changes width. A reversed version of this looks silly on the Bills’ helmet. In this black version of the Saints’ lid, the gradient is even thicker, and to make things more obnoxious, the pattern is a whole bunch of little fleurs-de-lis, which is, in my opinion, too outside the classic look box and tacky.

I’m certain a lot of people will love that feature.

I believe that with this white color rush uniform above, you go with two split gold stripes on the crown instead, with black in the middle and no white trim–this would match the shoulder stripes.

That said, I don’t think this helmet should go with any uniform unless there is a more dominant display of black somewhere, such as the traditional white jerseys with black numbers or maybe with the black pants. The traditional white jerseys, along with the throwback mustard gold pants, might look really sharp, sort of like the Missouri Tigers at one point in the 1990s.

I’d also like to see a matte finish on the helmet instead of the gloss. And maybe a black fleur-de-lis with a creative white and gold trim around it to make it pop. I’ve always liked how the Los Angeles Angels baseball team does that. LSU baseball did it with the purples in 1998, a uniform Coach Johnson should consider returning to.

I like the black face mask, but boy, there’s always something about an old-school gray mask that gives a rugged look. Maybe even a gold one to match the trim. And stripes on the socks. Not enough teams utilize the stripe look on the socks.

All of that said (and I am realizing that my headline saying “only one thing” is no longer even remotely accurate!), I suspect most fans will want to see these dark lids coupled with the all black unis on a Sunday or Monday night showcase game. We don’t know how new head coach Dennis Allen will treat Superdome fashion, but we suspect Sean Peyton would have definitely pulled out the all black at night.

I believe Sean may have liked something like this even more. I know I do. 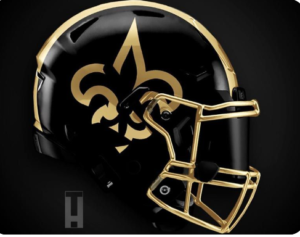 Interested in more news from Louisiana? We've got you covered! See More Louisiana News
Previous Article Now Is When Clay Schexnayder Learns Why You Don’t Do Deals With Democrats
Next Article LaToya Cantrell Unveils A “Peace Pole”, Twitter Lets Her Know What They Think Of It