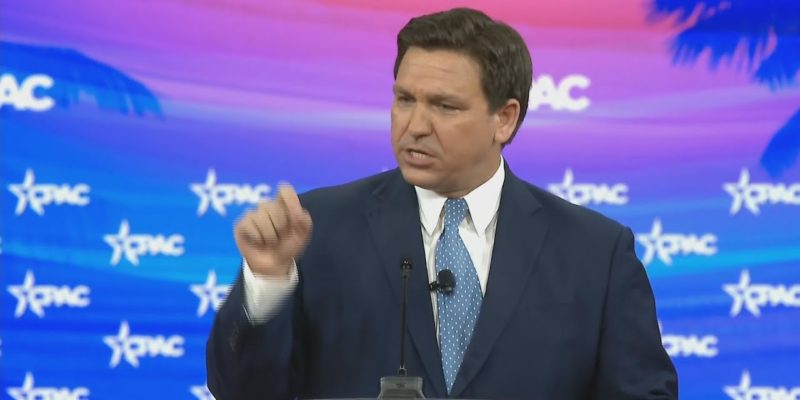 We’re showing you this because it’s what we need the Republican Party to become across the board if it’s going to assume the leadership role a revived America will need it to. As today’s Quote of the Day notes, Joe Biden and the Democrats are busily touting the fact that the GOP is now a “MAGA party,” which is their way of asserting that the new, more aggressive and less submissive Republican Party is merely a personality cult around Donald Trump.

But that’s a lie, just like everything else those people say. The movement Biden calls “MAGA,” or “ultra-MAGA” when he’s parroting the memos sent to him from the Maoist message-maker Anita Dunn, has been around since before Trump came along and it’ll be around after he’s gone. He’s certainly made a contribution to it but it doesn’t depend on his personality to make it go.

Ron DeSantis, after all, has no particular connection to Donald Trump. Trump’s a constituent of DeSantis; there is that. But DeSantis didn’t learn his politics from Trump. He got elected to Congress in 2012 and joined the Freedom Caucus, which was “MAGA” before there was a “MAGA.”

It’s therefore probably more accurate to say DeSantis is a revivalist rather than a “MAGA” conservative. We’re calling the movement revivalism, because there’s no use conserving the current status quo which sucks.

And part of building a revivalist movement is setting a standard for its leaders to follow. Part of that standard is how we want those leaders to present themselves publicly.

The old Bush Republican way is to keep your mouth shut and just take it when the leftist media attacks, with the idea that if you don’t fuel the fire it’ll die out on its own. Or worse, to begin falling all over yourself to appease your attackers. That was an uncommonly stupid way to go, and its deficiencies became very obvious when George W. Bush sat around for his whole second term allowing Chuck Schumer to peddle the “Bush lied, people died” narrative about the Iraq War until the American people had no use for Bush at all.

That isn’t a defense of the Iraq War, which was a monumentally stupid undertaking from the beginning. But Chuck Schumer voted for the Iraq War and so did most of his caucus, and they did so based on the same information Bush had. It was naked, putrid partisanship which led to his peddling that message and Bush never lifted a finger to defend himself.

On the other hand, the Washington Post just put out a hit piece on DeSantis’ press secretary Christina Pushaw, who is a warrior – think Kayleigh McEnany on steroids – trashing her as a “foreign agent” for work she did with an overseas client a few years back. Asked about the piece, this was DeSantis…

This is how it’s done.

DeSantis isn’t ranting, he’s not out of control. He’s passionate, but he’s still largely matter-of-fact and while what he’s saying has some depth of feeling – you can tell there’s blood flowing under that skin, unlike the zombie Mitch McConnell/Mitt Romney style of politician the GOP used to turn out – he speaks with a crystal clarity.

He doesn’t care how many hit pieces the media runs on Pushaw, she isn’t going anywhere. And in fact, as far as he’s concerned the national legacy media has zero credibility to criticize his administration at all.

That’s what effectively going on offense looks like. Because everybody who voted for Ron DeSantis and everybody who’s going to vote to re-elect him this fall, which is a goodly majority of Florida’s voters, feels the same way about the Washington Post that DeSantis does. That he’s willing to burn them to the ground in response to their attacks is a signal to his voters that he’ll do the same on their behalf.

Nobody has ever felt that way about Bush Republicanism.

It’s certainly a style which fits within Trump’s way of doing things. But the point is, this is the new standard. This is what the GOP must become. It can’t be a subservient party anymore, willing to allow the legacy corporate media and the left-wing activists who’ve taken control of the Democrat Party to set the agenda and police our discourse.

That doesn’t work. We know it doesn’t. And given the state of the nation an aggressive Left and a submissive Right have imposed, it can’t continue.

Before voting for anyone in elections to come, demand that they show you a bit of what DeSantis shows in that video above. If they can’t, they’re not fighters and they won’t fight for the American revival we need.