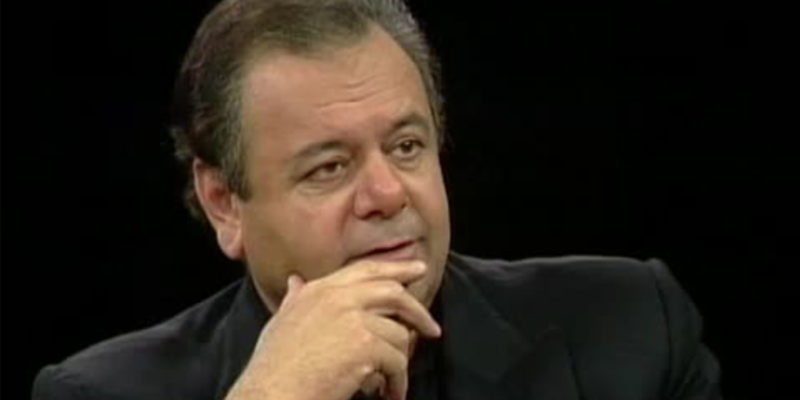 It’s Fall of 1991 and I’m at the Chalmette Dollar Cinema watching the latest stale movie that had finally left the marquees and big screens of the first run movie theaters.

It was a World War II adventure movie called The Rocketeer, about a young man who happens upon a jetpack that’s being sought by mobsters aiming to collect a generous bounty.

It turns out that the figure offering the reward is in league with the Nazis, who see its mass production as critical to a future conquest of North America.

Though motivated by greed, the chief mobster named Eddie Valentine objects to working with the Nazis and he and his men fight side by side with FBI agents in the film’s climactic scene.

Paul Sorvino played Valentine and from that point forward I’d always cite The Rocketeer as my favorite film of his despite starring in Goodfellas, which is considered one of the greatest (and most popular) films produced in the modern era.

Years later I’d get to know the “patriotic gangster” when he married a friend of mine who worked in the George W. Bush White House, Dee Dee Benkie.

By that point I’d seen him in many other films, though his portrayal of Henry Kissinger in Oliver Stone’s Nixon would in my opinion be his greatest performance.

While having lunch in Hollywood with the newlyweds, I brought up his role in Nixon and asked if Kissinger’s unique voice was dubbed into the film. Within seconds, Big Paulie demonstrated his mimicry skills reading the menu in his Kissinger voice. Paul said even famed impressionist Rich Little was amazed with his mastery of such a famous yet challenging voice.

Paul said the trick was emphasis on vibrating his vocal chords and then matching his accent and sound. Right after delving into the secret of his trade, Paul proceeded to run through a catalog of various character voices he used in films, including that of a smarmy southern preacher.

Paul was a true Renaissance Man who mastered numerous arts, from the culinary to opera singing to sculpting to painting to wine making.

The last time I was with Paul and Dee Dee was on a tour of the Reagan Presidential Library.

As he and Dee Dee were VIPs, they (and their plus one- me) had access to reserved areas such as the Gipper’s library apartment. When the docent pointed out that the office desk set was a gift from Pope John Paul II, Paul immediately reached in to rub it with his hands as if to receive a blessing. Nobody tried to stop him and nobody said a word as we walked to the next room.

Towards the end of the tour Paul went through the special exhibit on Genghis Khan and as soon as he saw this impressive statue of the “Wrath of God,” Paul parked himself in a corner, retrieved his sketch pad, and immediately began drawing what he saw.

The muse was upon this true artist.

Not long after that visit Paul made the news when the long known yet amazingly not exposed sins of Hollywood movie mogul Harvey Weinstein finally bubbled to the surface as apparently the leftist media saw no further use of the Clinton funder.

A TMZ film crew tracked the Goodfellas star down as he was loading groceries into his SUV and queried him about reports of how Weinstein harassed and then blacklisted his daughter Mira.

In the most dad response ever Paul said he’d put Harvey in a wheelchair and then upgraded it to putting him on the ground and upon realizing he was committing a crime with his previous comments wished Weinstein the security of a jail cell.

It was the ultimate “capisce” moment delivered perfectly. That so few parents of child let alone adult actors and actresses don’t speak so plainly about the “normalized” exploitation of aspiring stars speaks volumes.

There was one big regret with my friendship with Big Paulie

Years ago Paul expressed an interest in serving as a celebrity grand marshal in one of the New Orleans parades that invited entertainers to be a part of their parade. For years I lobbied members of one krewe about bringing Paul in, explaining he would be a warm guest (in contrast to some of the more notorious figures whose faces were embossed doubloons and reputations couldn’t be polished with a street cleaner) and that he would be happy to participate in goodwill visits to hospitals the day before the ride.

Though none of the patients at Children’s Hospital would’ve known him from Goodfellas (or I hope they wouldn’t), Paul would’ve been a hit with his voice abilities and great demeanor.

I can tell you that this famous actor was completely devoid of even a shred of pretense.

I wonder if the plumed-hat Muckety Mucks who regularly blew off Paul’s interest aren’t feeling some regret as the totality of his career and the wave of accolades from his peers in film and television flash before them with Paul’s passing.

Big Paulie was far more than a Goodfella; he was a good man.

Wishing his wife Dee Dee peace and comfort during this difficult time..