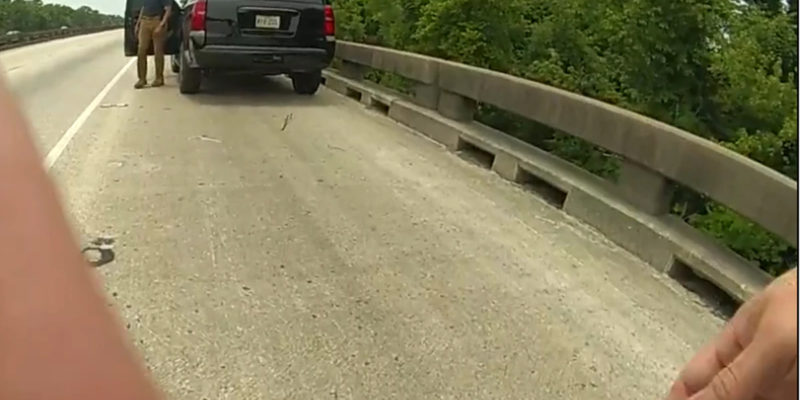 We said last week that there would be no consequences for Louisiana State Police Commander Lamar Davis driving at speeds close to 100 mph on the Atchafalaya Basin Bridge, when normal citizens would practically be executed on a roadside for doing it.

And so far it looks like we were right.

The superintendent of Louisiana State Police acknowledges he was pulled over for speeding in an unmarked work vehicle but did not receive a ticket from one of his own officers.

Col. Lamar Davis told WAFB-TV in an interview Friday that he accepts responsibility but does not remember how fast he was driving. A state trooper pulled Davis over June 28 on the Atchafalaya Basin Bridge along Interstate 10 west of Baton Rouge.

“I was simply wrong in that situation,” Davis said. “There is no excuse for it, other than I need to slow my butt down.”

The head of Louisiana State Police public affairs, Capt. Nick Manale, said the trooper “utilized his discretion and did not issue a citation.” Manale said the trooper did not make notes about how fast Davis was driving in the area where the speed limit was 60 mph (96 kph).

The body camera footage cuts off as soon as the trooper exits his vehicle and recognizes he has pulled over is his boss.

“Well, I’ll be,” the trooper said just before the video stopped.

The dash cam footage, which does not have audio, shows the trooper and Davis talking for a few seconds between their two vehicles before the two shake hands. Within 30 seconds of first exiting his vehicle, Davis stepped back inside his vehicle and prepared to drive off.

Go try and drive 30 miles an hour over the speed limit on a Louisiana highway where a cop can see you, and see if you can get by with a handshake.

One of the fundamental problems Louisiana has, and has really always had, is the utter contempt for the concept of law on the part of the state’s ruling class. That’s a problem you see in Third World places which is less evident in civilized societies – it’s fraying all over America because the nation’s ruling class is beginning to look like Louisiana’s.

There is no law and order in Louisiana, because it isn’t law and order when the privileged are treated differently than anyone else. This has been put forth as a racial issue in this state, but that’s a canard – black criminals in New Orleans, Baton Rouge and elsewhere are getting away with murder just as if they were the cartoon-character rich white dudes in the storybooks. Be connected, or be part of the right interest group, and the ruling class will spread a little love.

The district attorneys in the major cities of this state won’t prosecute anyone. I have a friend who has ironclad evidence of a financial crime of which he’s the victim, and it’s an open-and-shut case, and the DA’s office in the major Louisiana city where it happened won’t prosecute because they say it’s a “business dispute.”

Yeah, outright theft can give rise to a “business dispute.”

Lamar Davis is telling media organs that it’s within his subordinates’ discretion not to give him a ticket, which is a massive middle finger to the people of Louisiana. He knows he can get away with that, because he’s the guy watching Edwards’ back. He’s black, and he says the State Police isn’t a racist organization even if it did beat Ronald Greene to death on a roadside, and even if the FBI and Justice Department are now doing a “pattern and practice” probe of the State Police.

So so much as giving Lamar Davis the ticket every other Louisiana citizen could at least expect for driving like a bat out of hell on the most dangerous roadway in the state is far beyond the realm of possibility.

My friend is planning to pack up his business and move it to Texas, or at least that’s the direction his thinking is going. Who can blame him? If you’re not a member of Louisiana’s slimeball ruling elite, there isn’t much here for you – and it’s their project to insure that never changes.