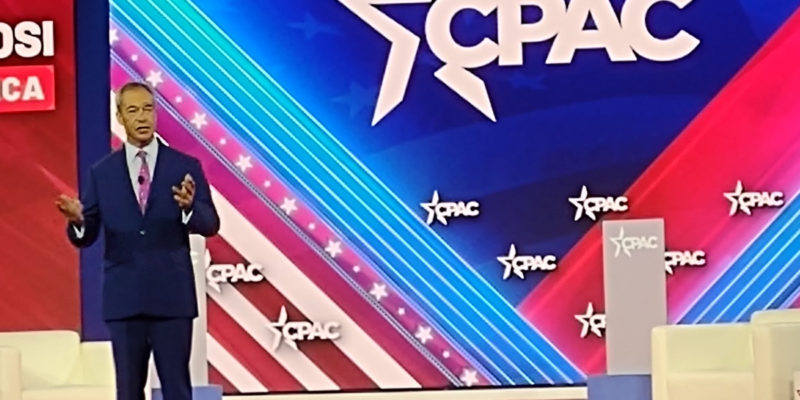 In the second installment of this three part interview with former UK Independence Party leader and GB News commentator Nigel Farage, the ex-European Parliament member and Trump confidante touches on whether the 45th president will launch a bid for the White House in 2024, provides insight on the recent resignation of Boris Johnson as British prime minister, offers his take on House Speaker Nancy Pelosi’s controversial trip to Taiwan, and shares his thoughts on the current state of European affairs related to the Russian invasion of Ukraine and speculates how things may have been different had Trump remained in the White House.

MB:  Do you believe former President Donald Trump will run for the White House in 2024 and when do you believe he will announce his decision one way or the other?

NF:  Yes I do.  Absolutely?  Did you see his speech (at CPAC Dallas)? I was with him at his office three months ago at Mar a Lago.  He’s lost weight, he looks good.  He’s the only president of America in my lifetime who looks younger after four years in office than he did before he went in.  He’s on fire.  His critics would say he’s a narcissist, blah blah blah.  Actually, do you know what, I actually think he has the self-confidence to believe he really con provide solutions to America’s problems.  He genuinely believes he can.

And you saw law and order would be a major plank (in his candidacy). I worked for two American companies for over twenty years.  As a former commodity broker and trader in Chicago, which is my spiritual global home because of everything it represented.  I still got friends living in Chicago…you don’t go out at night.  As an Englishman to me, New York was fun and exciting, but Chicago was the All-American City.  I loved it.  I loved everything about it.  I mean as a young man in his 20s and 30s I couldn’t wait to get to Chicago and everything it represented.  I mean, this was America.  This was the place where anyone could make it.  A lot didn’t but the chances, the opportunities were there.

And now you have weekends where there are fifty gun incidents.  Ten dead, forty wounded.  The whole thing is a complete catastrophe, an absolute catastrophe.  So Trump is right to be pushing on that.

So yes I think he will run.  As for when he will announce, that’s more of a technical, legal, financial question really.  My sense is that he will want to announce prior to the midterms to have ownership of it.  That’s what I think.  But I could be wrong.

MB:  There’s been some major political changes in the United Kingdom, particularly with the resignation of Boris Johnson as Prime Minister.  In America when Richard Nixon resigned the presidency it was clear-cut but in the case of Johnson, it seems his reasons for departing are more nebulous?

NF:  No, it’s very easy.  A total collapse of support of his own parliamentary colleagues, and up to 40% of those who voted Conservative in 2019, that’s what led to it.  Sixty ministerial resignations.  A total loss of confidence in him.  There are two problems with Boris.  One, he was elected as a conservative but governed as a liberal.  And two, and I am sorry to say, he’s lied his way through the whole of his life.  He’s got away with it.  Whenever he was called out, he’d sort of laugh at the journalist and walk away and they’d scratch their heads.  He just got away with it.

You cannot mislead parliament and you cannot lie to the British people as prime minister.  It’s just as simple as that.

A lot of Americans say to me that if the liars left Washington then they would be no one left.  Well maybe.  But (British) hold people to higher standards.  And if we do then I am very pleased about that.

MB:  Recently House Speaker Nancy Pelosi traveled to Taiwan, a trip that has raised tensions between Washington and Beijing.  Do you think Pelosi’s trip was a wise move by a high-ranking member of Congress as opposed to someone from the administration and was it all just mid-term election posturing?

NF:  No, it wasn’t just posturing.  And to be fair to Pelosi, she’s had a very strong stance on China for thirty years.  She unfurled a banner in Tiananmen Square in 1991.  I’m not a Pelosi fan but on China actually she was ahead of most people in understanding the problems.  So there is an issue with principle with Pelosi on China.

However, a one-woman mission to risk World War III looks reckless to say the very least.  I don’t think it was very well thought through.  There are major issues with China we have to confront.  I don’t think this was the right way to do it.  We should be letting sleeping dogs lie until we really work out what our strategy is because we don’t know.  The truth is we haven’t got one.  Whatever American guarantees there are to Taiwan, I’m not even sure they are worth the paper they are written on.

MB:  Sweden and Finland are both seeking membership in NATO.  For both countries this marks a major departure from their long-standing foreign policy postures.  Sweden has essentially been neutral since the end of the Napoleonic Wars while Finland was essentially an unoccupied over-accommodating neighbor to the Soviet Union during the Cold War.  What impact would their admission to the military alliance have on European military politics?

NF:  I have been consistently saying that (European Union) expansion caused the downfall of a democratically elected leader of Ukraine in 2014.  I have consistently said that continued NATO and EU expansion was stupid and dangerous, totally lacked any psychology of what Russia is and always has been.  But given where we are right now, there’s just not much I can say.

I kind of understand the arguments around the Donbas.  But I was wrong.  I didn’t think Putin was going to send a column of tanks towards Kiev as he did.  So I don’t think Sweden and Finland joining is a good idea but given where we are, I’ve personally run out of ammunition to argue.

MB:  Former President Trump maintains that had he remained in office, there would not have been an invasion of Ukraine by Russia.  Do you concur with his assertion?

NF:  Couldn’t agree more.  He told Putin very clearly.  He was talking to me in private about Ukraine, and I’ve got to tell you something- I didn’t see this happening but he did.  (Trump) is very good on the big picture stuff, he really is.  Look the (debacle in) Afghanistan would not have happened. That catastrophic withdrawal would not have happened.  Ukraine wouldn’t have happened. I think Trump’s single biggest success was in foreign policy.  He really did a great job.