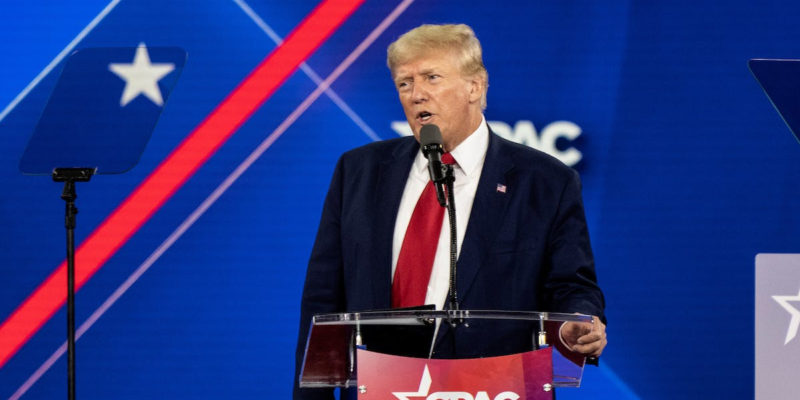 The American Conservative Union held their Dallas summer CPAC event running through the past weekend with no shortage of anti-establishment spice, featuring speeches from political figures who are no strangers to controversy.

The conservative confab made international headlines for hosting a speech from Hungarian Prime Minister Viktor Orban.

Orban has vocally pushed a Christian-traditionalist agenda in Hungary, encouraging the creation of larger families by young people and rejecting the gender fluidity mindset that has become increasingly fashionable in the West. Orban has also pushed back on immigration that has significantly altered the political and cultural composition of western European countries.

As Orban was leading off the first day of the conference, attendance at his speech was light as most attendees were arriving on Saturday for former President Donald Trump’s address closing out the conservative conference.

Robinson Fires Up the Conference

North Carolina Lieutenant Governor Mark Robinson delivered a passionate speech equating the defense of traditional American values to that of the Union Army protecting Little Round Top during the consequential Battle of Gettysburg.

The African-American Republican who rose to fame while addressing the Greensboro City Council as it deliberated whether to cancel a gun show in the aftermath of the Parkland, Florida school shooting, was very well received and managed to draw a similar enthusiastic response from attendees that Louisiana US Senator John Kennedy had at the CPAC Florida event earlier this year.

Former Trump strategist Steve Bannon was given the conference’s most prominent speaking slot at the Friday evening dinner. The guerilla conservative activist and commentator declared that the fight for what kind of country that would be bequeathed to future generations would be determined in the current political battlefield and chided self-proclaimed conservative leaders for failing to toe the line, allowing the vilification of the MAGA movement, and turning a blind eye to the harassment of activists by the state. FoxNews also figured prominently in Bannon’s criticisms for denying coverage of Trump-aligned GOP primary candidates.

The former Phoenix news television anchor spiked the football on her competitive yet successful bid for the Republican nomination for Arizona Governor.

Though Lake had spoken at the CPAC event earlier this year, the gubernatorial hopeful had a greater presence in Dallas and delivered a polished, well-received speech not long before the 45th president took the stage. A crush of well-wishers approached her at the Friday night event, underscoring her status as the newest and brightest star to be propelled from Trump world, as opposed to previously established political figures who have simply embraced the MAGA movement.

If Lake is victorious in her campaign this November, she would catapult to the front of the line (behind the Florida governor) of major players in the national GOP, similar to Reagan after his upset for governor in 1966.

Trump Remains the Man to Beat

Distance from the White House has made the heart grow fonder for CPAC attendees.

Though the conference straw poll is not in any way scientific nor does it reflect the country or that of the greater party, those attending the event are certain to participate in delegate nominating caucuses and primaries so the results cannot be summarily dismissed as meaningless.

Also worth noting unlike previous CPAC straw poll winners who invested significant resources in buying registrations by the truckload and helped facilitate the travel of willing proxies of their respective campaigns, Trump does not spend a dime on ensuring favorable results.

In fact the voting concludes hours before the former president speaks.

Trump received a 99% approval vote by those attendees who participated in the straw poll and 69% showing in a field featuring over a dozen potential candidates of standing.

The activist base is ready for Trump 2.0, though the only uncertainty is whether the 76 year old ex-president (and by Election Day 2024, 78 year old candidate) is willing.

In the event Trump passes on a third run for the White House, there would not necessarily be that open of a field of opportunity, at least if your name isn’t Ron DeSantis.

The Florida governor is the only other potential candidate who draws anything over 3% (racking up a respectable 24% against Trump) and sans Trump, racks up an impressive 65%.

Of course DeSantis must get through his re-election this November. Ask FORMER Virginia US Senator George Allen about the hazards of looking ahead two years too early.