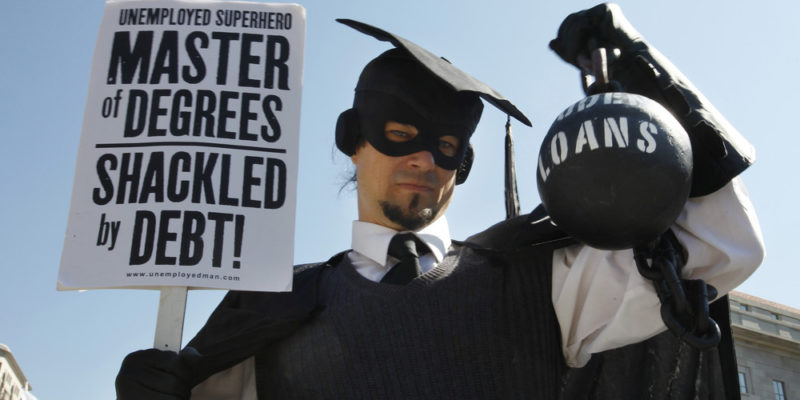 So Joe Biden claims that he has the authority to “forgive” student loans. He is proposing to forgive $10,000 for most borrowers of student loans and $20,000 for recipients of Pell grants. He has been threatening this action for some time; at one point he seemed to be playing with the idea of forgiving all outstanding student loans. Now that would be quite an undertaking, because total student indebtedness is now over $1.6 trillion. Wiser heads have apparently prevailed over Joe’s more outlandish scheme, at least for the time being.

There are problems with Joe’s plan, however: Many legal experts think he is overreaching his authority. While they admit that he has the power to delay loan repayments during a crisis, they do not believe that he has the authority to forgive the loans outright. And it is a stretch at this late date to even use COVID-19 pandemic relief as an excuse to burden the taxpayer (you) with an additional half-trillion dollars in national debt.

No less an “authority” than House Speaker Nancy Pelosi has publicly stated that while the President may delay the repayment of student loans in a crisis, only Congress can actually forgive them. Now this would not be the first time that the Biden administration and Democrat congressional leadership has been unable to coordinate on messaging, but who’s counting?

Perhaps Joe Biden hoped that no one would care very much about a mere half-trillion dollar loan forgiveness scheme which would help the college educated at the expense of the folks who didn’t go to college, paid their own way through college, or paid off their student debt. Like many of his political calculations this one turned out to be dead wrong, but so what? He can take credit for aiding a bunch of totally out of touch woke colleges which aren’t preparing their students for the real world, and no one will likely notice that his action will fuel the increasing cost of a college education well into the next generation.

You can understand his reasoning: In the twenty months of his administration, Uncle Joe has passed several trillion dollar bills through Congress (American Rescue Plan, Infrastructure Investment and Jobs Act, Inflation Reduction Act), and run up hundreds of billions in more debt with his off-the-cuff, poorly thought out executive actions and administrative orders. So what’s the big deal about a mere half-trillion dollars?

Well, actually, this is a big deal, because Joe Biden was already well on track to exceed Barack Obama’s 2009-2017 deficit spending rampage, during which time Obama added $8.6 trillion dollars to a national debt which in the previous two hundred and thirty-three years of our nation’s history had only accumulated to $10.6 trillion. (The current national debt is over $30 trillion dollars!)

You see, the present hot mess isn’t just the result of electing a doddering and morally compromised rascal to the presidency of the United States. Running up gobsmacking deficits in pursuit of their social engineering goals is what the Democrats do. And they’ll keep doing it until they are stopped, and the country’s economic and social health be damned in the meantime.

The simple fact is that we cannot sustain Biden and the Democrats’ level of spending without soon suffering a catastrophic inflationary spiral which would wipe out the accumulated savings of the American people and cost us our position as the world’s lender of last resort. The existential problem that we face is that the Biden administration is not yet half-way through its term, and God help us if there is more than one.

All the more reason to vote Republican on November 8th. This election isn’t just about halting the collapse of the world economic order and avoiding the threat of major war. It’s also about losing your life savings and having to start over from scratch, and leaving your children to face diminished prospects in a diminished world. We can’t let that happen!

P.S. If you’ve had enough of woke progressive ideology and the trillions wasted on the Democrats’ pet projects, please consider joining the Republican Party of Louisiana if you aren’t already a member. Just go to Geauxvote.com and click on Online Voter Registration. Most folks can save themselves a trip to the registrar of voters’ office and register to vote or change their party registration right there on the Internet. Join us and help make the difference, and forward this article to your friends and acquaintances.