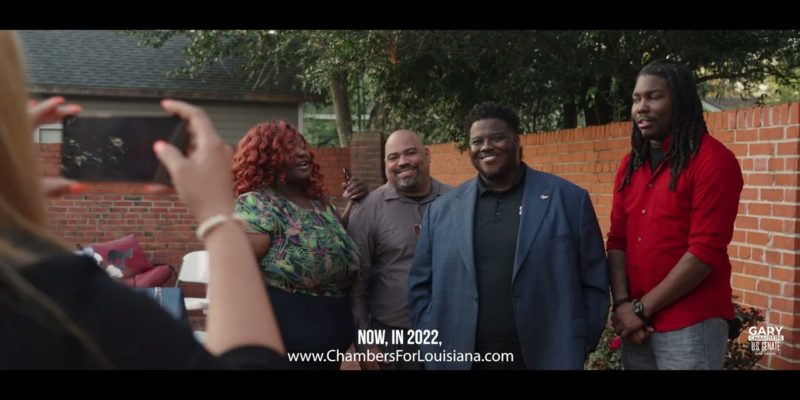 No, you’re not allowed to cheat on this and simply note that if it’s a Gary Chambers ad it’s about fleecing donors rather than winning, though that isn’t untrue by any means.

The the latest web ad Chambers dropped this week is a blatant effort to rake in some badly needed campaign cash in order to keep the gravy train that is his campaign rolling.

There’s a lot to unpack in here, of course, and Chambers’ chief opponent – the bizarrely long-necked stooge of the white Democrat establishment Luke Mixon – would do himself a great favor by releasing either an ad or a communique noting that Gary Chambers is not, in fact, FDR or Eisenhower or JFK.

The ad is grandiose to a comic extent. Chambers is talking about building the interstate system when his ideological compatriots are busily decrying the “racist” highways built as part of that system through the black parts of town in many American cities. He touts the Martin Luther King “I have a dream” speech while rejecting the key tenet of King’s message, the desire for a colorblind society, in favor of critical race theory.

And he builds the theme around how America has “progressed” past the old outhouse into things like modern plumbing when it’s people like Gary Chambers (not black people, but insane Marxist radical leftists) who can’t manage the modern public water infrastructure. See, for example, Flint, Michigan and Jackson, Mississippi.

This ad is another data point in a pattern surrounding Chambers’ campaign – namely, this is about fleecing white leftist donors from out of state while pushing enough race buttons to capture the black vote in the Senate race and put Chambers in a position to dominate Mixon.

It isn’t about beating John Kennedy. Everybody knows Chambers can’t do that. What he’s trying to prove is that Mixon can’t do it either, and that the Louisiana Democrat Party has no choice but to embrace its destiny as a black-run party.

Something Chambers needs the money of white leftists from outside Louisiana to do. And that’s why he’s channeling FDR and JFK – which he can hardly credibly do given his own personal history devoid of any real achievements, but no white leftist would ever allow himself or herself to think such things for fear of being seen as racist.

Chambers needs this one to make his cash register ring, because in his last campaign finance report all he declared with respect to cash on hand was $138,000. That’s hardly close to enough to keep the gravy train rolling.

So the well-heeled Marxists in Boston and San Francisco and Seattle and Chicago are going to have to pony up to prop him up, and that’s what this ad is about.

Meanwhile, here’s what an ad looks like when it’s aimed at winning an election…

Warnock and Biden’s record inflation has caused prices to skyrocket—from the grocery store to the gas pump and everywhere in between.

Georgia families have had enough—and they know #WarnockIsntWorking.

The ad doesn’t talk about grandiose governmental plans. It talks about real life for real people and the sacrifices stupid public policy forces normal people to make, and it ties Raphael Warnock, Walker’s opponent whom Walker currently leads in the latest Emerson College poll, to those stupid policies and their effects.

It doesn’t have gadgets in it like outhouses. It doesn’t need them. Because it talks about what voters are talking about, which is that inflation is gouging out the disposable income of ordinary Americans and ruining our standard of living.

And every attack the Democrats might want to make against Herschel Walker can’t put a dent in that basic fact which voters in Georgia are 100 percent aware of every single day.

Chambers’ problem is he can’t really do that. He complains that Louisiana is 50th in everything, and he isn’t wrong about that, but the problem is he’s running for the wrong office if he’s trying to fix that. We’re last in everything because of our state policies, and you don’t make those in the U.S. Senate. Most people get that. They also get that John Kennedy doesn’t have a whole lot of power to change the federal policies which are causing Louisianans misery along with folks in every other state.

They’re two very different ads reflecting two very different campaigns. Perhaps both are effective in creating the results they seek. We’d like that to be the case; as we’ve said, we’re rooting enthusiastically for Chambers to emerge as the standard bearer for the Louisiana Democrat Party and, hopefully one day soon, its political boss.

The more money he fleeces out of stupid white leftists from out of state in pursuit of that end, the better.