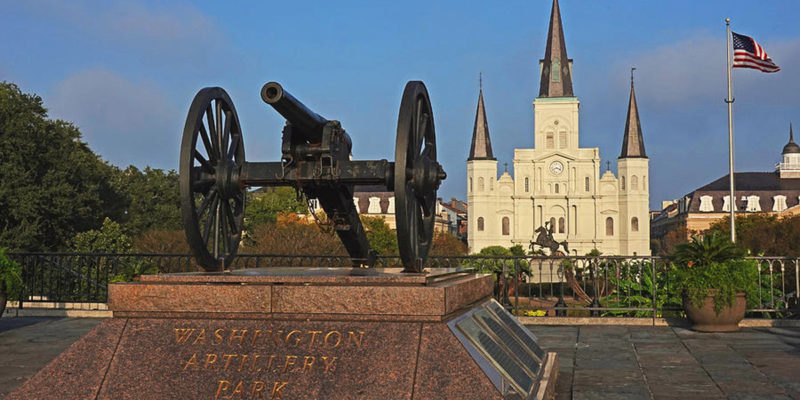 In 1976, Moon Landrieu erected the Washington Artillery Park monument. It was removed quietly the second week of August as being a symbol of White Supremacy. No one bothered to ask Moon Landrieu if he erected the monument for that reason. Moon Landrieu was New Orleans’ first bi-racial mayor.

In March 2018, The Hayride explained in detail the Landrieu history from William Clarence Mackie of Mississippi who was a farmer, slave owner, and Moon Landrieu’s great great-grandfather.  Mackie had a daughter with one of his slaves, named Luraney.  The daughter’s name was Harriet. In 1856, after Mackie’s death, both were sold to pay debts.  Mackie’s brother fought as a Confederate Soldier.

After the war, Harriet had a daughter named Cyrintha.  Moon’s grandfather, Victor Firmin Landrieu, then married Mackie’s granddaughter, Cyrintha.  After the Homer Plessey Supreme Court decision and the “one drop test” went into effect, Victor Landrieu moved his family to New Orleans.  In his book, Mitch Landrieu discusses the implementation of “Passe Blanc” for bi-racial people.   Both Victor and Cyrintha are buried in St. Louis Cemetery #3.

BATISTE: Mitch Landrieu Hides In The Shadows Of Race (thehayride.com)

From 2015-2017, when Mayor Mitch Landrieu was called for removing Confederate Monuments in New Orleans, he claimed that the monuments were erected by former Democratic Party Mayors and Council Members to promote White Supremacy send a message to blacks that whites were still in charge.

Mitch Landrieu avoided discussing the Washington Artillery Park and Cannon located across the street from Jackson Square. The cannon was used during the War for Southern Independence by the New Orleans based Washington Artillery military unit.  The unit was formed in 1838 and still exists today. As a bi-racial unit, it has served New Orleans well in military deployments, Hurricane Katrina, and Covid Testing.

In 2020 former Council Member Kristen Palmer represented the French Quarter and Algiers and was aspiring to become Council Member at-large. She created a Street Renaming Commission (SRC) which also looked at New Orleans Parks.  The SRC suggested renaming Washington Artillery Park. Palmer pushed through a motion to remove the cannon and rename Washington Artillery Park. She was soundly defeated in the 2021 election for council member at-large.

The park will be renamed for former Republican Lt. Governor Oscar Dunn, who was African-American. Oscar Dunn was born in 1822 to James Dunn, who was emancipated in 1819.  Following the outbreak in 1861 of the war, approximately 1,500 freed men of color formed the Louisiana Native Guards as Confederates in New Orleans.  Following the Union occupation of New Orleans, many switched to the Union Army. Oscar Dunn rose from the rank of Private to that of Captain.

The suddenness and symptoms of his death, led many to believe he was poisoned by the Democrats as he campaigned in the election of 1871.