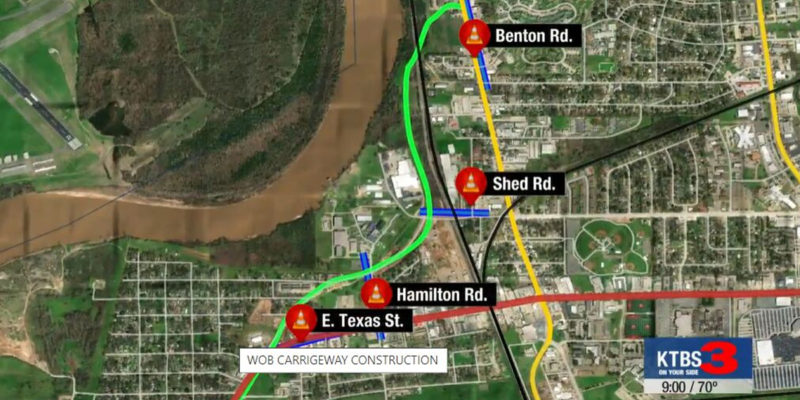 Take a handful of politicians desirous of creating monuments with other peoples’ money, throw in their favored contactor shielded from competition, and you get the sinkhole that has become Bossier City’s Walter O. Bigby Carriageway, spending on which has contributed to Bossier Citians having the highest per capita debt of any significant city in Louisiana, by far.

It’s not that the expressway, which latches onto the northern end of the Arthur Ray Teague Parkway (at one time it was known as the Parkway North Project) that when completed at Benton Road/Citizens Bank Drive will provide north-south access across the city with no railway crossings and few controlled intersections, is inherently a bad idea. It’s that a number of city councilors – with Democrat Bubba Williams, no party Jeff Darby, and Republicans Jeff Free and David Montgomery still in office from the project’s start – have taken such a cavalier attitude about the taxpayer dollars involved, fueled by placing overall management of the project since 2019 in the hands of Manchac Engineering, acting as city engineer but with a no-bid contract and thereby having reduced incentive to hold costs down.

Add to this that the project’s price presented for public consumption keeps varying and has become subject to substantial extras that in some cases should have been anticipated. Funding originally for it came from a bond issue in 2015, at the time named the 2015 LCDA Bond Fund (“LCDA” stands for the state agency that originated the loan, the Louisiana Local Government Environmental Facilities and Community Development Authority). The original purpose was for funding both the downtown revitalization project now basically completed and the WOBC, for $50 million. By 2016 with little activity on both accounts the balance had grown to nearly $52 million.

With work commencing, by 2017 it was down to $42.5 million. But by 2018 it was joined by another bond issue, dumped into a fund named the 2018 LCDA Bond Fund. Whereas the 2015 version had the two specific purposes attached to it – by 2019 the carriageway portion funneled into the W.O.B. Carriageway Capital Projects Fund – the 2018 version approved by the LCDA was for the nebulous purpose of “funding various capital projects as need arises.” Perhaps a more accurate name would be “City Council’s Capital Outlay Blank Check/Slush Fund,” because now politicians had a pot of money to dip into at any time for any reason as long as it had some kind of connection to brick and mortar.

(And keep in mind the Council also dips its bill into other sources of money that end up in the WOBC Fund; for example, at its Dec. 1, 2020 meeting it transferred from the minor Hotel/Motel Tax Fund $1 million and $2 million dollars from the minor Land Acquisition Fund into it, further reducing restraint on spending for the project.)

The initial $60 million raised from the 2018 issue, which climbed above that amount and had few expenditures for its first couple of years, eventually became the main vehicle by which to grow the cost of the WOBC. Meanwhile, public reporting at this time, often taking its cue from the city’s politicians and officials, continued to use a variety of figures for the cost of the entire project, split into two phases: one completion of a roundabout on East Texas Avenue, with the rest extending onwards.

Not long after the first commenced in 2019, one report said the total now would come to $55 million, with Phase I estimated at $11 million. That would grow to $11.5 million because, as typical in roads projects, while any good engineer will try to factor these in always unanticipated costs pop up. However, as then-city engineer Mark Hudson noted, an overrun in this range isn’t remarkable.

But by the time Manchac took over, another media report tagged the cost back at $50 million. Then, Manchac’s employee and designated city engineer Ben Rauschenbach asked for the cost to increase to $12.6 million to finish that segment, meaning costs now had risen by 15 percent over projections. Almost a year later – just as the Council and GOP then-Mayor Lo Walker maneuvered to deliver Manchac a three-year (reduced from five because the city charter disallowed that) extension on its partnership agreement without soliciting bids from competitors – Phase II commenced, at which time in public remarks Walker said the remaining segment would cost $36.2 million leading then-Council President Montgomery to claim the total would come in under $50 million.

Yet only days later another media report jumped the figure to $60 million total, according to Rauschenbach, which as an estimate he called “reasonable.” He maintained the $36 million figure floated days earlier for Phase II but asserted that covered only construction costs, so apparently $10-plus million would have to go to ancillaries such as rights-of-way, utility relocation, engineering and environmental studies. This guess is reflected in the city’s 2022-2026 Capital Project Plan.

Whether that turns out as “reasonable” seems questionable as costs continue to escalate. A review of ordinances since the start of Phase II, considering both change orders and addendums coming from funds other than the WOBC or 2018 LCDA, shows changes amounting to $2,329,590.23 more, including what is on the Council’s agenda this next meeting that includes one for $1,403,467.91 for the addition of street lighting, meaning with the phase at the half-way point it’s already 6 percent over projection.

Note that this doesn’t include other costs indirectly related to it. As Republican Councilor Chris Smith pointed out at the last meeting, an expropriation related to the project recently executed added another $3 million or so to the total cost of completion. Nor does this listing include nonpecuniary costs, such as the city having to accept disconnecting different ends of Shed Road in order to have the railroads whose tracks the road crosses let the carriageway through.

And more unforeseen increases apparently loom. Montgomery at that meeting said he knew of sound walls needing installation along the route, something in addition to the lighting left out of the planning that could cost millions more.

The change orders, on this and other projects, in particular have drawn the scrutiny of GOP Councilor Brian Hammons, who owns a construction company and deals with these matters in the course of business. Last meeting (not the first one in which he broached the topic) he wondered why such an important matter was overlooked that eventually pop up to force unplanned expenditures.

This pattern exhibited since Manchac took over the project, where out of the blue something seemingly overlooked without warning foists significant extra costs onto it Rauschenbach has blamed on its coming in after the fact. That excuse-making simply doesn’t cut it: it’s been on this job for three years and very likely a firm with prior experience in this area and at this scale either would have figured out quickly any shortcomings from the previous city management to address immediately or would not have neglected such obvious things as negotiating earlier and from a point of strength with the railroad, erecting needed lighting, or putting up sound barriers.

But when you are grooved city contracting for an extended period, you have that much less incentive to pay attention to your job and even have the gumption to ask for more, since there’s essentially a pot of money with no bottom to it. And that’s on the city’s elected officials who promote this kind of dealing (with Montgomery often extolling the virtues of no-bid contracting to favored vendors, contrary to Louisiana Legislative Auditor recommendations) and who put Bossier Citians on the hook for $60 million more that to them looks like free money.

At that last meeting, Rauschenbach basically admitted that the tactic is to use WOBC money for forecasted construction costs and everything else comes from the 2018 LDCA Fund. Perhaps that’s why he couldn’t give an estimate of where project costs would come in, although Montgomery ventured a guess of $63 million and thought $20 million would come from that fund.

Rauschenbach said in the near future he would come back with a tally of what has been and likely will be spent on the project. That is a reckoning long overdue, which demands complete transparency showing what has been allocated to whom from what fund and whether the expenditure was forecast or is a change, negative or positive. Only then will citizens know how much money has gone into the black hole and how much extra they will have paid courtesy of councilors all too willing to make an insider deal (for the record, Darby opposed it) and/or mortgage recklessly city residents’ future.

Interested in more news from Louisiana? We've got you covered! See More Louisiana News
Previous Article KOENIG: We Need More Christian Conservatives In Louisiana Politics
Next Article What Do We Think About The Recall Effort Against LaToya Cantrell?