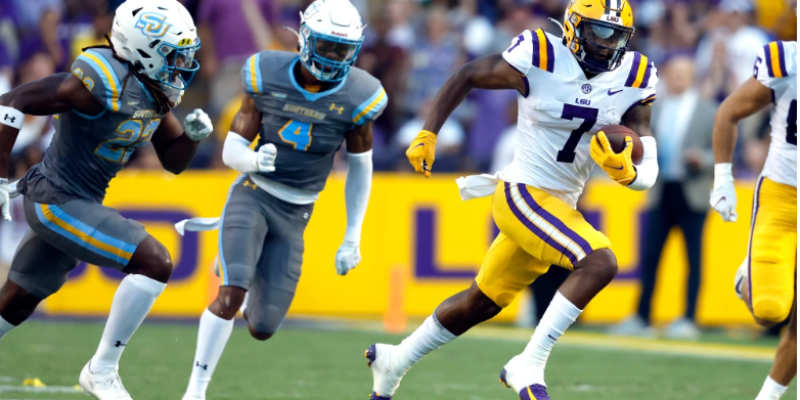 Week 1 blockbuster, cross-conference matchups are exciting for both players and fans. We have seen a significant increase in many a team’s schedule in recent years, a move that provides an early standard against which coaches can go about road-mapping the season.

One problem, however, is when one team schedules a weaker opponent during “Week 0” as it has come to be called, thereby allowing said team to flush out a majority of its silly mistakes with a higher margin for error and, more importantly for the scope of this article, a lower chance of losing the game.

I say that with hesitancy, of course, because of the number of upsets that can occur during any college football weekend. Just this past Saturday, No. 6 Texas A&M and No. 8 Notre Dame fell to Appalachian State and Marshall, respectively.

So there’s always a chance of a surprise.

By the way Notre Dame still hasn’t won a game since Brian Kelly came down to Baton Rouge (0-3).

What happened with LSU and this season’s opening schedule should never happen again. Florida State, who barely edged the Tigers in Week 1, 24-23, got to play a warm-up game against Duquesne on August 27, while LSU’s opening night would not be until the Sunday matchup a week later against those same ‘Noles.

Florida State was not all that impressive against LSU. The Tigers looked like the Bad News Bears for 50 minutes of that contest, until they suddenly turned it on late and made it a game, and FSU still could never pull away. Despite its myriad blunders all game, the Tigers still should have had a chance to win it in overtime, if not, of course, for the bumbling mishap on the game-ending extra point.

But that’s just it. These bumbling mishaps can be covered in 47-7 romps over the Duquesnes of the world, while they oftentimes can’t be against teams with a pulse. Had LSU been Florida State’s first opponent, would the outcome of the game have been the same? Or better yet, had LSU played Southern on August 27 and followed that up with Florida State, is there anyone–after watching the Tigers pummel the Jaguars Saturday–who thinks that LSU wouldn’t have performed at a much more intense, much crisper clip in the ‘Dome?

It wasn’t just the 65-17 score Saturday night. It was how that score came about. It was the first 15-plus minutes of near-perfection and total annihilation of a weaker opponent. It was 37-0 at the end of the first quarter, and it should have been 42-0 had Evan Francioni been able to gain control of a blocked punt at the goal line instead of accidentally kicking it forward for a safety.

The 37 points were an LSU record for a quarter.

The special teams, which were so abysmal in the FSU loss, sparkled, forcing a turnover on the opening kickoff and blocking the punt for the safety. It even executed the prior-to elusive exercise of fielding punts.

Micah Baskerville, who blocked the punt, had already intercepted a tipped ball and raced 29 yards for a score that made it 28-0. It was a microcosm of how the defense played for much of the night, holding the Jaguars to 262 total yards, with most of those coming in the second half after the Tigers had already amassed a 51-0 halftime lead.

Offensively, the team shined to the tune of 550 total yards, with 83 of those coming from All-American Kayshon Boutte in very limited action. It was a nice bounce back for Boutte, who struggled against Florida State and had some issues with body language, according to Kelly. Additionally, the running game looked much more aggressive and the starting offensive line largely dominated all night.

I could go on and on with play after play and stat after stat, but that’s it in a nutshell. For one half, and especially for the Blitzkreig of an opening quarter, the LSU coaches proved that they were both savvy and bold enough to make early season changes to the lineup. And the players proved that they could play with the fire and execution necessary to eventually be a championship program again.

I know it was Southern. But just consider how lackluster LSU has often looked against these types of teams, year after year, in the past.

Once upon a time an up-and-coming Nick Saban was losing to UAB in Tiger Stadium, remember.

Or, again, just consider what the Aggies are going through in College Station this week.

The only thing I as a fan lament is that LSU couldn’t have played Southern as its first game on the schedule. No, it likely wouldn’t have been as dominating of a performance because the opening season loss against FSU obviously lit a fire under the entire team. But still, they would have beaten the Jaguars and, at the same time, worked out the kinks in time to put up a more complete effort against Florida State. Dare I say it–I believe the Tigers would have come out on top. Moving forward, let’s hope that there is something written in the contracts that prohibits a team from scheduling a cupcake to open the season while the other team is sitting idly at home.