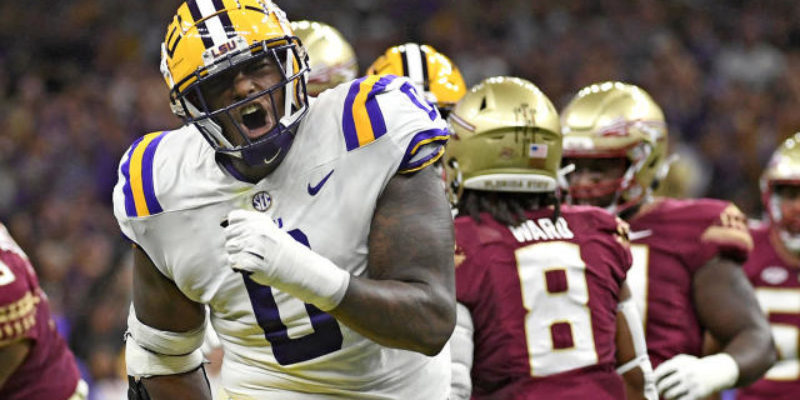 Well, on second thought, it looks like that “from the ashes rebuilding mode” might be in play after all.

In my brief preview of the LSU-Florida State opener Sunday morning, I mentioned that my heart was rooting for Garrett Nussmeier to start at quarterback for the Tigers but that my head said it would be Jayden Daniels.

I got that one right.

Turns out my heart betrayed me in a much bigger way with another prognosis.

I didn’t think it would take a full rebuild this year with the amount of talent on LSU’s roster and the pedigree of new head coach Brian Kelly. It turns out–and I should have known this having been a coach myself–that victories on the field are predicated on things that LSU seems to be very deficient in right now.

All those things were missing Sunday night, either directly in the way of pouting and penalties, or indirectly when those things negatively impacted the execution of play. Junior wide receiver Kayshon Boutte’s mental toughness looked tenuous at best for much of the night as he dropped balls, didn’t look for a sure touchdown pass coming to him, and failed to give any effort to work back toward the ball on another target down the sideline.

Lucky for him his defender was called for a weak pass interference that allowed Boutte to save face. But the kid is talented and tough, much more so than he showed Sunday night, and he will have his opportunities to show the player he is and that he is appreciative of the opportunity to play the game of football for pay while being handed a free education.

Said Coach Kelly after his conversation with Boutte: “I had a conversation with Kayshon. His standard is so high. It was a difficult day for him. It wasn’t his best but he’s going to have great games. He’s the least guy I’m concerned about on our offense.”

That said, apparently Boutte has scrubbed his social media presence of anything related to LSU football. Strange, indeed.

“He’s a young man who hasn’t been in this situation before and he needs some guidance,” Kelly said. “So, we spent some time and we worked some things out that will help him handle the scrutiny.

“Quite frankly, the scrutiny was strong. His reaction was probably similar to what my reaction would be as a 60-year-old. He has handled it in a manner that he’ll learn from and continue to grow from.”

Once again my heart is wanting to win here and believe that the kid from New Iberia will bounce back in a big way. All athletes have games where the frustration overcomes them. It was indeed a difficult day for him, but as Gordon, whom Boutte knows well, would say, he needs to Get It Done.

And then you look at senior captain Ali Gaye’s awful headbutt of the State quarterback, and realize that a lot of these on-field issues cannot in fact be corrected in an offseason with a new coach, no matter how much discipline he demands. You wonder how that momentary selfishness computes with the same player who passed on the NFL draft to play ball for the Tigers one more year. You assumed him to be a leader, but with one play, you question everything, not only Gaye himself, but an entire defense and team perhaps still stuck in the mindset of a former way of doing things.

Of course you’re thinking that because at the time your Tigers are getting owned by a weak Florida State team and on the very same play the receiver is catching the touchdown pass with one arm while being interfered with.

That one play was a microcosm of the whole night. That is, of course, if it wasn’t the play where sophomore star defensive tackle Maason Smith tore his ACL while celebrating a stop during the very first defensive drive of the game.

Yeah, that seemed to set the tone for the whole miserable night.

Of course, I could talk about muffed punts and missed assignments on kicks and a late-game personal foul on a slap to the opponent’s face and a shanked 20-yard punt. I could also go on and on about how awful the offensive line played and the practical non-existence of a power run game.

But ultimately, if you’re reading this, you know all that.

I think the important thing to consider is, perhaps, a comparison of 2022 to another era in LSU football history.

Because as I watched the game Sunday night I couldn’t help but think of Nick Saban’s first year in 2000 and what it was like to watch those Gerry DiNardo holdovers play.

You had your share of studs, but you also had your share of headcases. Saban had to navigate that field of landmines while losing to lowly UAB at home early in the season, only to knock off a highly ranked Tennessee team the very next week, only to get shelled by Florida on the road the following Saturday, 41-9. Overall, the Tigers went 8-4–this on the heels of an abysmal 3-8 season under DiNardo–while collecting victories over No. 11 Tennessee, No. 13 Mississippi State, and No. 15 Georgia Tech to end the season in the Peach Bowl.

Many fans still remembered that UAB loss, though.

And with that as one prevailing mindset among fans, in Saban’s second year, LSU limped through half the schedule at a 4-3 clip after losing to Ole Miss at home. Many of the Tiger faithful had had enough of Saban. With many calling for his firing, all Saban and the Tigers did from that point was reel off six straight dominating victories, the last being a trouncing of No. 7 Illinois in the Sugar Bowl. LSU finished the season 10-3 and ranked No. 7 in the country.

Two seasons later, in 2003, the Tigers would hoist the crystal ball for its second national title in program history. And Nick Saban, the greatest to ever do it, was born. He, a coach who ran and still runs an accountability-heavy, disciplined program, had to stay the course and allow time and perseverance to smooth out the incredibly volatile rough edges he started out with on the heels of Gerry DiNardo and some of the most talented losing record teams in college football history.

As the game wore on Sunday night, I couldn’t help but make the comparison to Kelly and Orgeron.

This team, this program, and this coach may very well have to endure a similar narrative. This process may be bumpy before it smooths out over time. I believe there are absolutely more lows ahead for this team this year, perhaps even lower than the first three quarters of Sunday night’s debacle. But because of Kelly’s coaching ability and style, combined with the Tigers’ undeniable talent, there is also reason to believe that there will be a surprise or two this year. They’re the type of team that could sandwich upset wins over Tennessee and Ole Miss around a blowout loss at Florida in The Swamp. Or, it could enter the final game of the season in College Station at 4-7 and, with nothing to lose, somehow tag a loss on the Aggies that knocks them out of the national title picture. It’s that type of team and that type of transition that will likely be necessary as Kelly grows this program into a consistent contender again.

All of that could be true, or, maybe none of it. The reader must forgive me if I sometimes hope a little too much with my heart.