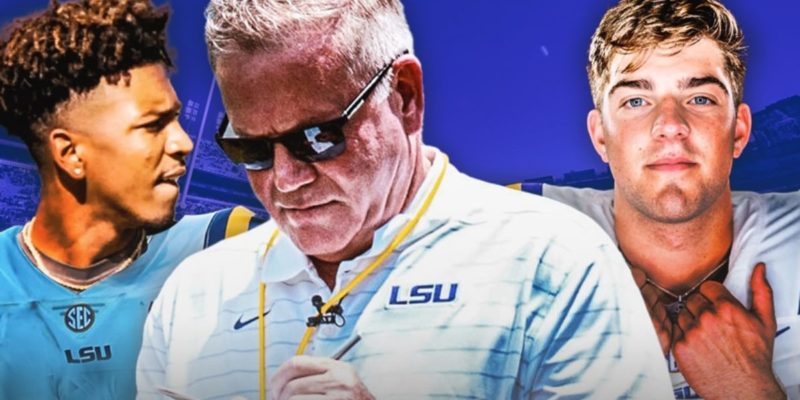 It isn’t Tiger Stadium, but suffice it to say that there won’t be any chance of rain tonight in the Superdome.

Tonight in New Orleans, LSU will return to the spot of its 2019 national championship in hopes of reversing a two-year, 11-12 trend and returning to the national conversation.

Kickoff is at 6:30pm CST and will be televised to a national audience on ABC.

The much-anticipated Brian Kelly era of LSU football is upon us, and it couldn’t be on a bigger Louisiana stage. Perhaps upstaging Kelly’s debut, however, is the question of which quarterback will take the first snap of the season for the Tigers.

Earlier in the week Kelly decided to hold off on announcing the starter, a choice between second-year man Garrett Nussmeier and three-year man/Arizona St transfer Jayden Daniels.

“We’ve made a decision, but I’m not going to announce it publicly,” Kelly said this past Monday. “Certainly everybody here wants to know who the quarterback is. I get that. But I think it’s a tactical advantage for us not to announce it.”

For purely self-serving reasons, my heart wants it to be Nuss, considering I wrote a story on him when he initially committed to LSU right in the middle of the doldrums of the 2020 quarantine. The article did extremely well with readers, ranking somewhere in the top-5 in terms of total clicks, and this on the heels of some big hits with Joe Burrow and the 2019 championship club.

Yes, my heart is with Nuss. But my head is with a more proven commodity and a specific recruit of Kelly himself in Daniels.

Either way, the ultimate hope of every Tiger fan of course is victory.

Where the journey has ended for so many before us.

Sunday Night in the Superdome. pic.twitter.com/Egp95dSng2

Indeed, Coach Kelly, winning championships isn’t easy. And tonight fans will find out exactly how hard or not hard this LSU football team has been working in the off-season, how much they have trusted Kelly’s blueprint.

The Tigers enter this campaign unranked for the first time since the early Nick Saban days, which isn’t really a surprise given the team’s mediocrity over the past two seasons. But this team is hardly going to struggle. It is not in some from-the-ashes rebuilding mode. The Tiger roster is loaded with talent, high-level NFL talent at that, and a stellar season and New Year’s Six bowl is not, in my opinion, that far out of the question.

Players like Kayshon Boutte at wide receiver, Masson Smith, Jacquelin Roy, BJ Ojulari, and Ali Gaye on a loaded defensive line, in addition to many other skilled returners and transfer players, should provide the stardom and experience necessary to match the seemingly high discipline and character of this fresh new program under Kelly.

Kelly is a winner, always has been. Plus he is already doing a better job with the offensive line in both coaching and recruiting. Among three major points Scott McKay makes about the team, maybe the most important question involves the offensive line:

But the offensive line was lousy a year ago, and it’s brand new. Freshman Will Campbell is the anchor at left tackle, and while he looks a bit like a Whitworth-style franchise player at the position it’s a lot to ask of him to be a star immediately. Sophomore Garrett Dellinger seems to have settled in at center, a serious weak spot a year ago, while junior Anthony Bradford might become the road-grading dominator he’s been projected as since he got to LSU at right guard. Transfer Miles Frazier at left guard and senior Cameron Wire at right tackle round out the starting five, with senior transfer guard Tre’Mond Shorts playing a lot as well. They’re big and physical, but they’re new. We’ll see starting on Sunday whether the offensive line can be a strength.

It is a valid question mark. But if the offensive line is anything like everything else Kelly has done in Baton Rouge so far, it will be just fine. The relentlessness and commitment to excellence he has demanded even before the first snap is reminiscent of the competence of a Saban-run program.

That said, Tiger fans will be happy with just returning to the on-field discipline of the 2019 squad. The ghost of Saban is long gone, and this LSU football program shouldn’t need long to return to championship relevance.

Interested in more news from Louisiana? We've got you covered! See More Louisiana News
Previous Article What Jeff Landry And Eric Schmitt Found Out About Censorship Is Scary
Next Article THE TAKES: LSU Loses To Florida State In The Opener