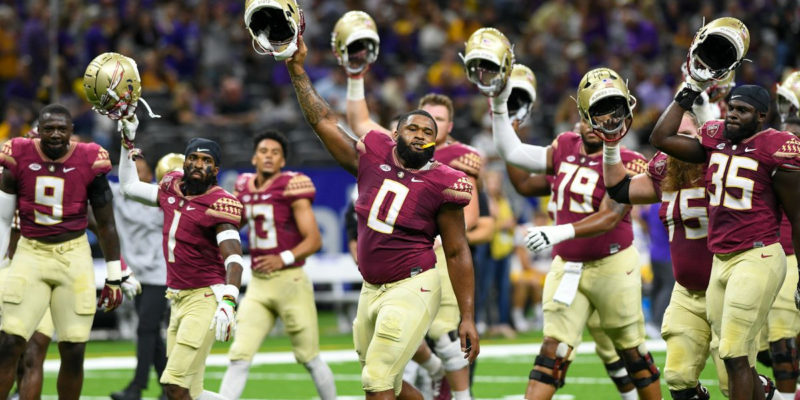 We’ll go through these quickly, because who wants to spend much time revisiting such an atrocious game?

1. It turns out that this game was lost years ago.

You’re going to be tempted to hang that 24-23 loss to a Florida State team which at the end of the day isn’t any more out of the woods than LSU is on Brian Kelly, who after all just picked up a more-or-less $100 million contract to coach LSU football. And sure – the mistakes that cost LSU that game were the mistakes of a poorly-coached team.

He didn’t get that $100 million contract by putting on performances like Sunday night in the Superdome.

Kelly’s track record says he’ll fix what happened against Florida State. But the track record of the past two seasons says he won’t fix it until he’s got his players on the field.

What you saw on Sunday was that the veterans, the holdovers from the 2020 and 2021 teams Kelly was counting on to deliver big for him against Florida State, absolutely let LSU down.

Remember, Brian Kelly didn’t go 11-12 the last two years. Those guys did. And it was absolutely an 11-12 team, one who lost to Missouri and UCLA and Auburn twice and Ole Miss twice the last two years, out on that field on Sunday. This now has the looks of a rebuilding project which must exorcise the sins of the previous staff before it can bear fruit.

2. Keyshon Boutte probably should have left.

He’s supposedly LSU’s best player, but there were six passes thrown to Boutte in that game, all six of which were entirely catchable. He caught two. He dropped a touchdown pass on the first drive of the game that he had with both hands. Then he completely quit on a pass that was perfectly thrown which would have been a touchdown if he’d just engaged with the ball. And Boutte then dropped two other passes in the second half.

In a word, effort. Or lack thereof. On one of Boutte’s second half drops he actually jogged his way across the field on a route and then sat down in a hole in the zone, then made a poor effort on a catchable throw from Daniels that would have been a first down. It was a bad, bad look.

The thing to remember about Boutte was that he spent most of the offseason threatening to hit the transfer portal. And then he gave that performance Sunday night.

On multiple occasions Kelly was heard in post-practice press conferences talking about how McNeese transfer cornerback Colby Richardson, who did play well against Florida State, had shut Boutte down in fall camp. Now we know that had more to do with Boutte than Richardson.

Kelly needs to make an example. Boutte needs to go into the doghouse this week in advance of the Southern game. If he’s willing to accept a demotion maybe he can be brought back into the rotation before SEC play starts in two weeks. If he wants to pout, or to hit the transfer portal, then let him. LSU showed Sunday that this will be a rebuilding job rather than a quick turnaround, and it’s more important to set a winning culture than it is to coddle players not interested in giving great effort.

3. The youth movement has to begin on the offensive line, but not end there.

Yes, Will Campbell had a terrible game at left tackle, and yes, Garrett Dellinger’s snaps at center were awful. But the biggest problem LSU had amid a shameful, alarming performance on the offensive line was from senior right tackle Cameron Wire.

Wire was beaten relentlessly by Florida State defensive end Jared Verse, a transfer from FCS school Albany . Verse had at least three sacks, two of which came over Wire, and he also came over Wire to block the Damien Ramos field goal in the 2nd quarter which proved at least potentially decisive in the game. He’s a senior and a holdover from the Ed Orgeron era, and he was far and away the worst of the linemen on a night when nobody was good.

A change has to be made. Either Marcus Dumervil, a highly-touted redshirt sophomore, or true freshman Emery Jones have to get plugged in at right tackle. It gets you nowhere this year playing a senior if he’s no good.

Campbell and Dellinger may yet prove they can’t play. Wire has proven he can’t play. You’ve got to move on from him.

But senior defensive end Ali Gaye, who got himself thrown out of the game with one of the stupidest targeting penalties we’ve ever seen, looks like another excellent candidate for a phase-out. Gaye is definitely a talented player, but he was almost completely absent against Florida State and in the one play where he finally beat his man, he openly head-butted FSU quarterback Jordan Travis late. Didn’t put up his hands to force a high-trajectory throw, and didn’t even put his hands forward to shove Travis which might have interfered with his motion. Instead he just did the dumbest and most selfish thing he could do.

Gaye’s penalty didn’t particularly affect the game seeing as though the play was a touchdown anyway, but he got himself tossed from the field for it. And had the pass not been complete it would have given FSU a first down close to the goal line.

LSU has young defensive ends who show promise. They need to play. This is Gaye’s last year and he showed that he isn’t coachable. Time to move on.

This applies at linebacker as well.

4. Yes, Brian Polian has a lot to answer for, but damn.

LSU’s new special teams coach Brian Polian looks like an utter moron after the abysmal performance of his unit Sunday. Punt returner Malik Nabors muffed two punts, and two kicks – Ramos’ field goal and the PAT attempt that lost the game – were blocked for the same reason, namely that Wire and freshman tight end Mason Taylor allowed a rusher inside of them while instead blocking an outside man. There was also a stupid unsportsmanlike conduct penalty on freshman linebacker Harold Perkins after a kickoff that gave FSU the ball at the 40 yard line, and a shanked punt by Notre Dame transfer Jay Bramblett which created a short field and led to another score.

That was one of the worst special teams performances in LSU football history.

The thing is, Polian is known as one of the best in the business. He didn’t get that reputation offering up efforts like this.

Look for lots of personnel changes after Sunday. LSU won’t win an SEC game without a drastically improved special teams.

Interestingly, Nabors – who should never get another opportunity to return punts again after Sunday’s debacle – didn’t actually cost LSU points. The two muffed punts resulted in a turnover on downs at the one yard line and an FSU fumble at the 1.

5. Jayden Daniels isn’t the problem. He might be the solution.

For most of the game LSU fans were screaming about how terrible Daniels was at quarterback. But his struggles were pretty traceable to two sources: one, the offensive line’s abysmal performance, and two, the failure of his receivers to make plays.

Until late in the game what offense LSU did have came almost solely from Daniels scrambling around after being flushed out of the pocket. He ran for 114 yards on 16 carries, a number you certainly can win with. And he finished 26 of 35 for 209 yards and two touchdowns with no turnovers, which isn’t fantastic, but on the other hand five of the nine incompletions were drops.

The backup quarterback is always a fan favorite, and Doug Nussmaier needs to see action against Southern, but Daniels gave LSU a chance to win by leading two late drives when LSU was all but dead after the interior of the line finally stopped allowing Florida State to collapse the pocket.

Daniels might just end up being a good quarterback for LSU. Giving him some help would be a good way to test the hypothesis. Late in the game LSU did a little bit of that, and it worked. We’ll see if things develop.

6. Ratchet down those expectations, because this could get really ugly.

The over-under on wins this season for LSU was seven, and lots of people thought that was way too low. Sunday night showed that, unfortunately, it was anything but.

LSU is the only SEC team with a loss right now, and it isn’t like LSU played the best opponent of any league team. Georgia, Florida and Arkansas all beat ranked teams on Saturday, and several other SEC teams looked far, far better than LSU did against inferior opposition.

As such, without massive improvement that this team – given its showing to date especially on the offensive line and at linebacker – might not be capable of, a single win in the SEC is potentially beyond its grasp.

Things could literally be that bad.

Before the season you could say Auburn and Mississippi State and perhaps Ole Miss and Florida were winnable games. This past weekend LSU wouldn’t have beaten any of those teams given their efforts (though Ole Miss was pretty uninspiring). Alabama, Texas A&M, Arkansas and Tennessee were all far, far better as well.

It’s reasonable to expect a good coach like Kelly is, regardless of Sunday’s performance, will coax a good deal of improvement out of his team week by week, and there could be some wins to be had in the bargain.

But LSU will need at least three SEC wins to become bowl eligible now that they can’t be any better than 3-1 out of conference. And frankly, the schedule is backloaded against finding those wins late (Alabama, Arkansas and Texas A&M are the last three conference opponents).

This could be rough.

If you’re an LSU fan you’re got to hope that this team is capable of some very serious soul-searching and increased buy-in after Sunday night. Because Florida State might be the 9th-best team on LSU’s schedule and the Tigers, though they certainly had tons of opportunities to win the game, were badly outplayed most of the night.

We sure were hoping to have better news after the opener. We can’t summon it. Batten down the hatches.

Interested in more news from Louisiana? We've got you covered! See More Louisiana News
Previous Article It’s Sunday Night In the Superdome!
Next Article GARLINGTON: The Other Kind Of Man-Made Climate Change