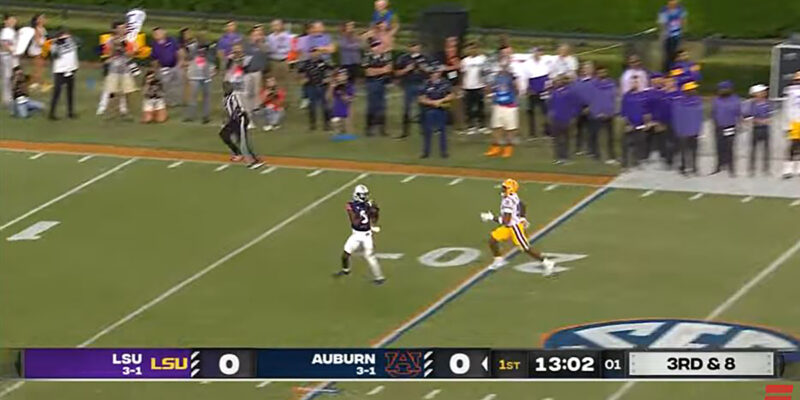 There’s an old quote ascribed to former LSU football coach Bill Arnsparger, which goes like this: “if you’re going to play like shit, at least win the game.”

And that’s the only thing you can really say about the 21-17 win LSU managed over Auburn at Jordan-Hare Stadium Saturday night.

It was a butt-ugly performance, but it was enough. And enough is, for whatever reason, all LSU seems to be able to get in Auburn almost no matter how much better a team they are than the orange and blue Tigers.

So recognizing that a win is a win, and given that Brian Kelly is still building his program in this first year at LSU, we’ll tell some unhappy truths about what happened on the field Saturday.

The LSU Secondary Was ATROCIOUS

In the first four games of the season, LSU was beginning to reclaim its reputation as DBU. Increasingly we were seeing defensive backs flying to the football, making plays, offering tight coverage and making pests of themselves.

Well, that went completely by the boards in the Auburn game.

There were a couple of highlights, to be sure. Greg Brooks’ interception in the fourth quarter which salted the game away was the biggest play of the game, and Jay Ward’s scoop-and-score after the strip-sack B.J. Ojulari registered on Auburn quarterback Robby Ashford in the second quarter would have to rank second; LSU was dead in the water before that play and outplayed the opponent the rest of the way.

But other than those two plays, Good Grief that was a terrible performance. LSU fell asleep over and over again, running off and leaving receivers alone for huge plays all night long. Ashford, who is anything but a polished passer, was 19-of-38 for 337 yards and a pair of touchdowns, taking advantage of busted coverages that were maddening to watch.

One play perfectly exemplified how it went. LSU had Auburn in a 3rd and 25, and Ashford escaped out of the pocket and rolled to his right. The defense was in a 3-deep zone, and Mekhi Garner had the deep zone on the right. Tight end John Samuel Shenker was running a deep cross into Garner’s zone, but he left it to chase Ashford and had the ball flipped over his head for a 35-yard gain and a first down.

Things like that can’t happen. Kelly was seen on the sideline screaming at his players to “Do your job!” Hopefully this was the bad experience that would ram that lesson home. If so, the fact that LSU managed to win the game and go to 4-1 despite needing to learn it would make this a good night.

Let’s Stop Talking About How Good LSU’s Receivers Are

Yes, they’ve been open again and again only to watch Jayden Daniels fail to hit them this season, but as of right now there is zero reason to think this is a good receiving corps LSU has.

Between the illegal formation and illegal shift penalties, the dropped passes, the blown blocking assignments in the running game and other horrendous mistakes, it was perhaps the worst effort of an LSU receiving corps in the modern history of the program.

Kayshon Boutte? All-American? He dropped a three-yard pass right in his hands, caught none, and whiffed a block on a running play that cost LSU a first down conversion. He also was called for an illegal shift because he didn’t come set before Noah Cain went in motion on a second-quarter play.

Yes, Daniels induced a near-psychotic episode from Kelly on the sideline because he simply will not go through his progressions and put the ball in play in the passing game. But the drops only intensified when Daniels tweaked a knee and came out of the game for Garrett Nussmaier, who will throw it.

We don’t want to hear how good these guys are. Not after the Auburn game. They’ve got a lot to prove now.

Statistically this wasn’t a bad performance by LSU. All told, the Tigers rushed for 185 yards on 49 carries – take away the three kneeldowns at the end of the game and it was 46 for 190.

You can win with that.

Daniels had 59 yards on 16 carries and a touchdown. It was a gutty performance which cost him a tweaked knee and he couldn’t finish the game, and we’ll see if he’ll be able to go against Tennessee next week.

The backs, though, gave LSU a strong performance. Josh Williams was particularly good, toughing out 68 yards on 17 carries and moving the chains consistently, particularly in the second half. Williams started the game and he’s the most dependable back LSU has.

John Emery is a lot more talented than Williams is. Emery gave LSU its two best plays. He caught that 39-yard wheel route from Daniels which set up LSU’s first touchdown and his 20-yard touchdown run later turned out to be the winning score. His 8 carries for 42 yards and that touchdown is a good stat line.

But Emery’s fourth-quarter fumble was inexcusable, and it might put him on the bench behind Williams and Noah Cain (5 carries, 21 yards of hard running).

Running on Auburn’s solid defense was good. The fumbling can’t happen. And if Daniels is going to be out or limited in the ground game, one wonders whether LSU can score on any of the teams left on the schedule.

Moore spent the week talking trash about LSU, saying at one point that he was the best receiver in Baton Rouge but wasn’t given a chance to show it. Interestingly, for most of the game Moore had a point.

But then he melted down and cost his new team the game.

Moore had an opportunity to throw a wide receiver pass inside the LSU red zone and he put it up for grabs, where linebacker Harold Perkins picked it off and kept an erstwhile scoring drive off the board. Then, after Emery’s fumble gave Auburn a last opportunity to retake the lead with less than five minutes left in the game, Moore had the ball taken away from him by Brooks.

Lots of talk and no action doesn’t make a winning player. It reminds one of the fact that when Moore was in Baton Rouge he lied about a police encounter as a freshman and created a racial incident. Now he’s the goat who lost the game to LSU.

LSU’s Never Out Of A Game. The Problem Is That All Too Often They Don’t Seem To Be In One

Kelly has said that he’s convinced his team is a bunch of fighters, and this is the third comeback they’ve mounted in five games. Twice they’ve been down by a double-digit score in the second quarter against an SEC team and they’ve come back to win.

So good for them that they show such fight and they don’t give up.

Not a miracle. Not lucky.

But this is the third game out of five – and it’s true of all three games they’ve played against Power 5 teams – that LSU showed up and looked unprepared to play.

Is it bad game planning? Is it nerves? Is it a team still looking for identities on offense and defense?

At the end of the day the fact is this is not all that good an LSU team. The fact they’ve come from behind and won twice in three tries is terrific, but falling behind three times is just who they are.

They really didn’t put up much of a number early against New Mexico, either, after all.

You can tell that Kelly is irritated at his team’s lack of execution in the first half of games. With Tennessee coming into Tiger Stadium for an 11 a.m. tilt next Saturday, this pattern had better stop – Tennessee is too good to spot 17 points to, and if LSU does that next week they’ll get run out of the building.

Interested in more news from Louisiana? We've got you covered! See More Louisiana News
Previous Article KENNEDY AD: “The Next Time You Get In Trouble, Call A Crackhead”
Next Article LACAG: Louisiana Legislature Offers Up Private Property To Green Energy Gods