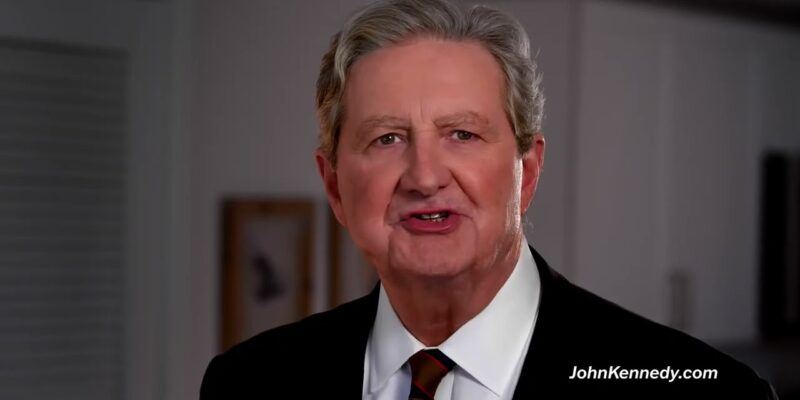 It’s a pro-cop ad, obviously, and he’s ripping the Left for their pro-crime and anti-police stand. This is the third TV ad the John Kennedy campaign has released, and it’ll surely be all over the tube in Louisiana this weekend. You’ll see it when you watch LSU on Saturday and the Saints on Sunday.

We noted earlier, making reference to the ridiculous Pat Dennis carjacking case where the prosecutor didn’t even bother to notify Dennis that the little punk who carjacked him was going on trial on a certain day, so he wasn’t in court and the punk got off due to their being no witnesses against him, that the judicial system – judges and DA’s in particular – is quickly becoming the worst problem amid Louisiana’s crime epidemic.

But the cops – or, more particularly, the deficit of them – are a problem, too.

New Orleans needs 2000 cops. It has less than 500. Baton Rouge is a good 120 officers short of its full complement. The Louisiana State Police, which is likely to get hit with a hug-a-thug consent decree like the one which ruined the NOPD a decade ago, is 300 officers short.

These aren’t budgetary issues. They’re problems of leadership and morale. Left-wing politicians in mayor’s offices and city councils have trashed the police, and the leadership of the police forces is horribly weak, and people don’t want to work in those conditions when they know the political class won’t support them when things get ugly.

Alton Sterling, who was an utter oxygen thief long before he tried to pull out his gun while fighting with a cop that July night in 2016, which resulted in his death and subsequent martyrdom by the street-criminal lobby that is the Black Lives Matter crowd, did more to ruin law enforcement in Louisiana than anyone else. Now our streets are more unsafe than ever before, and it’s literally safer in Third World hellholes like Johannesburg, Cairo and Lagos than it is in Baton Rouge and New Orleans.

Kennedy should run on the issue. There should be federal help to reduce crime – as I noted in my latest American Spectator column, that help should come courtesy of Congress defunding and breaking up the FBI and Justice Department over the fact it’s become little more than a secret police for the Biden regime, and it should be conditional on a commitment by those cities to actually fight crime rather than delve into idiocy like cashless bail or refusing to prosecute property crime.

But while it’s an issue that ought to be litigated in the midterms and there should be a federal role in bringing the crime epidemic to an end, the fact is that where this issue is really going to be solved is in two places. First, at the next legislative session there needs to be a whole host of reforms making the criminal justice system a lot tougher on habitual and violent criminals and protecting property rights, and also making judges and DA’s a lot more accountable when they fail to protect the public.

And second, we’re going to need to elect a governor who’s not pro-criminal like John Bel Edwards is. If Edwards was a leader rather than a ruling-class prince bent on enjoying his office to the hilt while pandering to the status quo crowd and his national Democrat overlords he would be working to help solve the crime epidemic in our cities. Instead he’s given a great example of what not to do. So our next governor had better be ready to hit the ground running in order to clean up our streets.