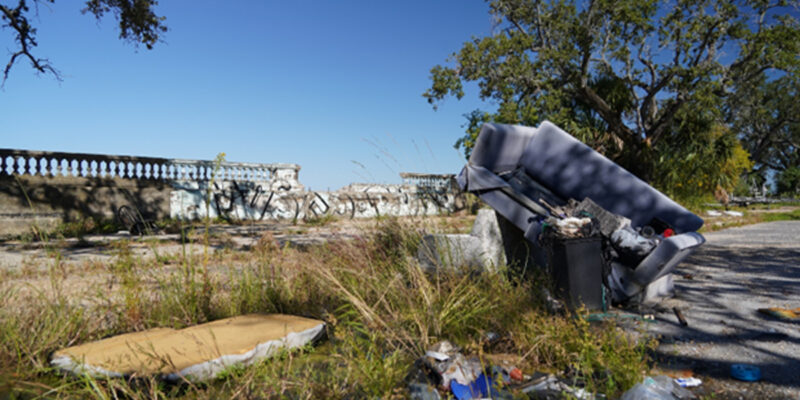 Jefferson Parish lost a massive sales tax revenue generating site with the storm.  The new pumping station prohibits the return of restaurants that were once the water.  Jefferson Parish now has a 1.3-acre park needing revenue allocated for its care and maintenance. After 17 years nothing has been done and the question of what happened to the Hurricane Katrina FEMA money for repairs remains unanswered.

By 2015 former City Council Member Susan Guidry had rezoned the 4.2 acres of the Park to Commercial. This may be a violation of State Law 378 which requires 70% of residents living within 300 feet of a park to give written approval to convert park land.

The City Council of New Orleans in January 2019 passed a motion to increase the buildable height in 70124 zip code to 65’ to allow a 4-story building to be built on top of the 17’ high height requirement needed for Flood Protection in the marina.  The change was opposed by Lakeshore residents but needed to make the 1.8-acre West End Lake Shore Park parking lot able to accommodate a mid-rise building with retail, housing, and bars.

MARSALA: A Bait (Shop) and Switch (to Housing) (thehayride.com)

In May of 2021, the State of Louisiana, City of New Orleans, and Jefferson Parish entered into a Cooperative Endeavor Agreement or CEA to work out a financial split on developing the 4.3 acres of West End Lake Shore Park. The agreement calls for “residences and other improvements” but does state the development must comply with state law.  Since 1906, ACT 209 has restricted use of West End Lake Shore Park to that of a “Public Park or Amusement Park.”

On September 20, 2022, the Municipal Yacht Harbor Management Commission held a special meeting to hear resident concerns on the proposed housing and retail development by New Orleans and Jefferson Parish Councils. None of the 40-50 residents attending supported the development. Residents asked what the Yacht Harbor Board members thought.

Commission Chair Tim McConnell and some other board members expressed that their responsibility was to do what is best for the citizens of New Orleans and that objective could be in conflict with what is best for residents of the marina.

Suggested was the option to Keep the Open Space in the park and seek grants to promote Conservation and care for the Lake Pontchartrain. Other questions going unanswered are:

From 1830 to 1930, Smokey Mary was the train that served Milneburg. Today people can watch the slow moving train wreck of twenty years of blight being converting a park to a parking garage.

Interested in more news from Louisiana? We've got you covered! See More Louisiana News
Previous Article MURRAY: Prepare To Pay More For, And Get Less From, Your Credit Cards
Next Article KENNEDY AD: “The Next Time You Get In Trouble, Call A Crackhead”