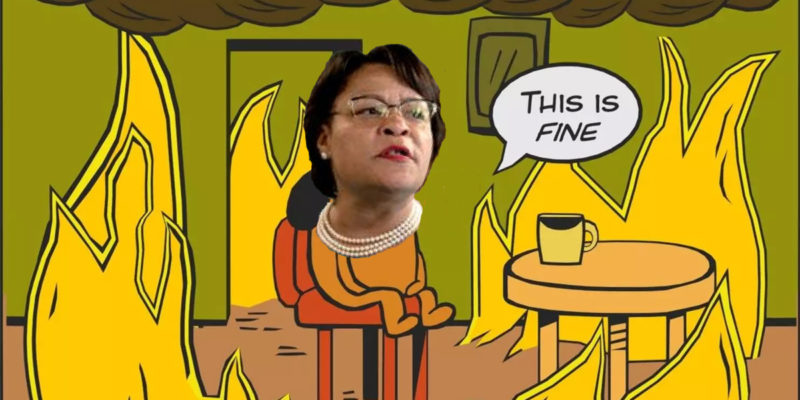 Lost in all the hoopla about the elections this week was a report by Fox 8 Live in New Orleans about that city’s ridiculous Democrat mayor and her sexual exploits with the hired help. It turns out that LaToya Cantrell isn’t just screwing the taxpayers of that city…

Newly-obtained surveillance video has led to more questions about how Mayor LaToya Cantrell is spending her time and taxpayer dollars.

While investigating whether Mayor Cantrell was living at the city-owned Upper Pontalba Apartments, FOX 8 obtained 45 days of surveillance video from a French Market Corporation camera outside the building. That video showed Cantrell spent many hours inside the apartment, often during the workday, and sometimes stayed overnight.

The head of the Metropolitan Crime Commission, Rafael Goyeneche, said that could be a violation of a city policy that states city property is for work-related purposes and not personal benefit.

As FOX 8 looked into more of the surveillance video, we found the videos show Mayor Cantrell is also spending hours there with one member of her security team, leading to questions about what work is being done as the two collect taxpayer-funded paychecks.

On Aug. 2 at 8:03 a.m., Mayor Cantrell arrived at the Pontalba apartment. She was accompanied by a member of her security detail, NOPD officer Jeffrey Vappie.

Vappie spent five hours and 40 minutes of his workday inside the apartment that day.

FOX 8 requested email and cell phone records from Cantrell between 10 a.m. and 6 p.m. that day.

The city responded that the mayor didn’t make one work call on her cell phones for those eight hours, and only sent two emails.

Each email was two sentences long. The first, sent at 10:56 a.m. was regarding a complaint about a mechanical permit. It read: “Ms. Gloria, please forward to Tammie for me. Thank you in advance.”

The second, at 2:06 p.m., was sent to someone at the Vieux Carré Commission and read, “Bryan, I appreciate your response and clarity, it matters! Thank you very much.”

“It’s fair to ask questions because this is a taxpayer-owned property, and these are employees paid by the taxpayers. If the mayor is off duty, and she’s at home in her private residence, then whatever she does there is her business. Nobody’s going to ask questions about that. The citizens are not going to concern themselves with that,” Collins said. “But when you are staying in a taxpayer-owned building, and you have employees that are paid by the taxpayers, the taxpayers have a right to know what you are doing in that property. And the taxpayers have a right to know what duties you’re performing during those hours.”

Of the four officers paid to protect Mayor Cantrell, Vappie is the only one who entered the apartment. The other NOPD officers, Louis Martinez, Robert Monlyn, and Orleans Parish Sheriff’s Deputy Charles Ellis never entered.

They’ve got enough video evidence to basically prove she’s carrying on with this guy.

Which is her business, we guess, but she’s doing it in a crib the taxpayers are paying above market for.

I’d be outraged about this, but I’m long past that.

Last Friday, I was down in the city. Tyrus, the red-hot Fox News personality and one of the stars of the Greg Gutfeld show who actually lives in Mandeville, was doing a comedy show at the Orpheum. I rarely go to Orleans Parish anymore, and my latest trip there reinforced why.

I left my vehicle in one of the few relatively safe areas of the city and, with the folks with whom I was attending the concert, took an Uber downtown. When we got to the Orpheum and we were waiting in line to get in, I noticed a bit of a clamor across the street right in front of the Roosevelt Hotel, one of the ritziest places in the whole city.

But the source of the noise wasn’t ritzy. The opposite was true.

There was a guy decked out in typical ghetto garb having a “disagreement” with a scantily-dressed female. What was said was difficult to make out other than the rather loud and exceptionally clear use of the F-word repeated so many times it was challenging to make out anything else.

And then she hit him, and he hit her, and in no time flat it was full-on combat between the two.

So the two cops working security at the Orpheum looked at each other, rolled their eyes and ambled across the street.

Did they arrest anyone? No.

Instead they shooed the two combatants away, telling them to take their beef elsewhere because, essentially, they were scaring the fish away.

The Orpheum wasn’t quite full. Every other stop on Tyrus’ tour has been sold out. The venue closest to his home wasn’t. He noted during the show when thanking the audience that he’d been told there were cancellations by folks who said they were nervous about safety downtown and that’s why they were no-shows.

The ride back to the car was equally as instructive. Our Uber driver ran three red lights on Claiborne Avenue, and when I asked her why, she said “Carjacking.” There were four of us in the car; I remarked that we would seem to be a harder target than others. She explained that the opposite was true – female driver, plus three passengers without a lot of melanin meant there might be additional swag to be gained from the robbery.

And then there was the street quality in uptown New Orleans. Which is so bad that it’s literally comical.

There are traffic barrels everywhere in the middle of streets. They’re there to mark the gigantic potholes, so wide and deep that they will eat a wheel and immobilize a car. On the corner of State Street and St. Charles Avenue there’s a huge one that the locals have dubbed “La Brea” with a sign taped to the traffic barrel which sits in it.

And manhole cylinders are protruding up from the streetbeds. Not just a little – in some cases they’re rising out of the street by a foot or more. You’ve got to crawl through some of the streets uptown at 10 mph or less in order to miss them because if you should roll over one it will almost surely tear your suspension apart.

That’s when the streets are even paved. After retrieving my vehicle I was attempting to reach the I-10 onramp at Carrollton, and the streets just east of Carrollton Avenue north of Earhart Boulevard are now dirt-road moonscapes which are undriveable at speeds of more than 5 mph.

The city gives off the vibe of a Third World nation teetering on the verge of a revolution. But we know there will be no revolution. There is no discernible movement toward change of any kind. There is just a slow-but-accelerating, inexorable decline into miasma. Most people from New Orleans I talk to who haven’t left are saying they will.

And the remainder seem to think LaToya Cantrell’s antics are funny. “At least she’s colorful,” they say. They say that because they know that if LaToya is recalled or forced to resign amid her various scandals, what replaces her will be just as bad or worse.

And also because they know there is no saving New Orleans from itself. Only some miracle can save New Orleans. And should that happen, it will only reset the city along its insisted-upon path – a slow-but-accelerating, inexorable decline into miasma.

So sure, Lee Zurik at Fox 8 is to be commended for his investigative reporting, if only to chronicle the filth and sin reflective of the city’s decline. Perhaps someone might learn something from it that could be useful in saving another city, one which desires and deserves to be saved.