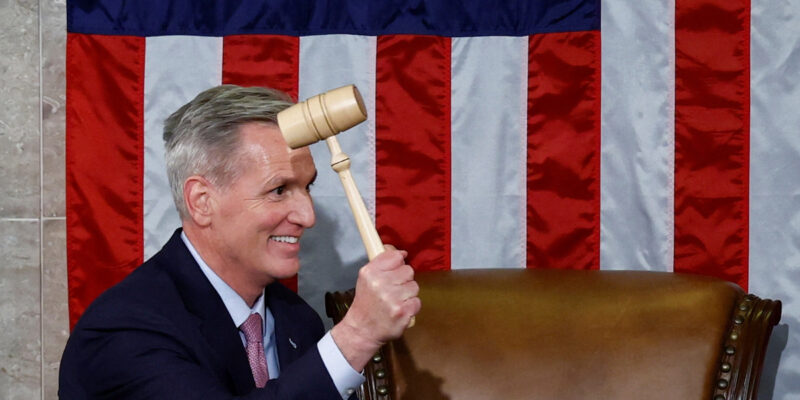 There was white smoke billowing from the south chamber of the US Capitol just past midnight on Saturday when after four days and fifteen ballots the Republican slight majority in the US House of Representatives finally consented to give Kevin McCarthy the speaker’s gavel.

But before sliding headfirst down that slide helter skelter, let’s take a moment to dwell on the really good part for Louisiana: big congratulations to US Representative Steve Scalise for formally assuming the position of Majority Leader, the first congressman from the Pelican State to hold that office since Hale Boggs in 1972.

While the drawn out settlement on speaker led to speculation that the gavel might fall to the affable Republican from Jefferson, that prospect was unlikely.

Scalise has consistently demonstrated an inclination towards patience in his politics.

Had McCarthy ‘s speaker ambition been thwarted, there was little to no chance that Scalise’s fingerprints would’ve been found on the candlestick in the caucus room.

That’s not who Scalise is or has ever been.

As for now-Speaker McCarthy the multiple ballot gauntlet had to be an excruciating experience, trying his nerves and battering his pride.

However that 200 of his colleagues chose to stand behind him through it all ought to provide him with great solace and tremendous gratitude. In a town better known for opportunism than loyalty, that an overwhelming majority of the GOP caucus remained in his corner was remarkable.

Why did McCarthy have such a difficult job closing the deal?

The Republican Party failed to get the job done in November.

Despite polls showing great dissatisfaction with the state of affairs in America, the GOP reaped only modest gains at the ballot box. While there’s plenty of blame to go around, including left at McCarthy’s doorstep as the top Republican congressman, the greatest share must be assigned to Ronna Romney McDaniel and the RNC.

Having a scant majority as opposed to a margin of twenty-five seats, a group of congressmen were able to leverage their small numbers into blocking what should’ve been a first-ballot win for McCarthy.

Another reason is that as speaker, McCarthy would be following in the wake of previous GOP house leaders who proved to be disappointing to conservatives to put it charitably.

Conservatives were rightly sore over the in-office records and out-of-office rhetoric of John Boehner and Paul Ryan.  The GOP Congress is far removed from the revolutionary days of the Newt Gingrich speakership and a bloc of conservatives wanted to enter into this Congress with concrete assurances as opposed to harboring a “hope for the best” mentality.

To be sure some of the acrimony was rooted not in ideology but personal dislike by a handful of the holdouts, which became apparent when an agreement had apparently been reached yet a few spoilers managed to prolong matters.

And self-interest was also a factor.  Florida Congressman Matt Gaetz was raising money off his obstinacy as fundraising text messages were flying out during speaker votes.

McCarthy deserves a chance to lead without the sword of Damocles (or Gaetz or Lauren Boebert) being dropped on the speaker’s rostrum over the first kerfuffle. Nobody herding a thin majority like the GOP’s could toe the line of perfection under these circumstances.

To some degree McCarthy is having to play the political equivalent of the board game of Operation.

Removing that funny bone without being shocked will seem like a piece of cake as McCarthy must manage a caucus of 221 other politicians with healthy egos and divergent interests and constituencies.

The Bakersfield Republican has the unenviable task of steering conservative bills through a turbulent house that won’t see the light of day down the hallway in the US Senate and almost certainly won’t be toted down Pennsylvania Avenue with a date with a veto stamp.

But McCarthy literally signed up for the job. If he didn’t know what he was getting into before, Kevin must’ve figured it out between ballots six and fifteen.

With a rules package in place that will provide for greater accountability with the leadership and a better way of crafting legislation, much of the intra-caucus haggling should be behind him now and the new speaker will go into his dealings with the Democratic US Senate and White House with little room to backtrack, ironically strengthening the Republican Party’s negotiating position.

Interested in more national news? We've got you covered! See More National News
Previous Article VIDEO: Jeff Landry, On Tucker Carlson, Discusses The Censorship Lawsuit
Next Article Texas Is Absolutely Flush With State Surplus Cash; Let’s See What They Do With It