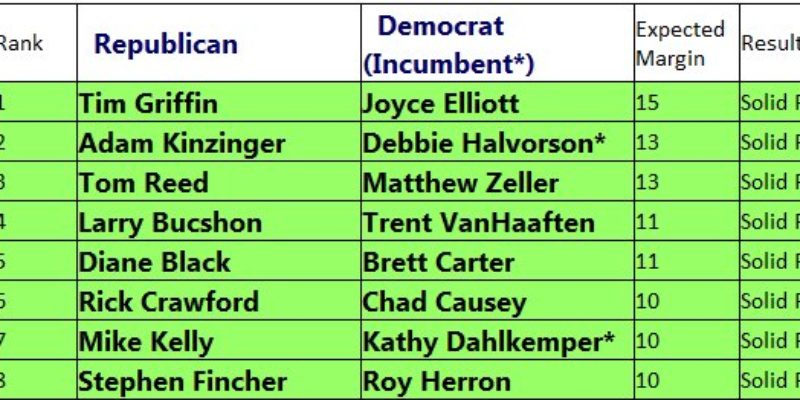 Editor’s Note: in looking for guidance as to exactly where Republican prospects lie for gaining a majority in the House of Representatives, we went to a true expert on the subject – and Ross Little certainly qualifies. Little is a member of the Republican National Committee and an institution within GOP politics in Louisiana. Few know elections like he does. Below is how Ross sees things shaping up in six days…

Here is my list of the top 132 seats currently held by a Democrat and the prospects of a Republican winning.   The expected margin is simply my opinion.

There are 57 seats set forth with a margin of 1 or more.  I think we’ll win all these.

After that, it gets tricky.

My guess is that we will win 76 of these seats on November 2.

There has been a lot of talk about the intensity of the conservatives in this election.  It’s very, very important.  The key in an election is the extent of political discussion among advocates. As friends and neighbors talk about the election, awareness increases. If one excited neighbor talks to another apathetic neighbor about how liberals are destroying the country, the apathetic neighbor tends to vote conservative.

This is like a gigantic door-to-door campaign, but without the organization. It is very effective. And it is working this year in favor of conservatives. To the extent that the effort is organized, the effect has the potential to be greater. The efforts are more organized in states that have spirited elections for governor and other offices.

Louisiana will have to wait until next year for the election for governor. Most other states are having these elections this year.

The elections at the bottom are the most difficult to pick. Why? There are very, very few polls available for these races, so it’s mostly a guess, sometimes based on information, sometimes just based on a hunch, mostly based on past experiences in these districts.

Miracles happen, and we could win a few of these. I hope so.  Sometimes my margin is way out of line with the polls.  In most cases, my bias is in favor of the Republican.  It’s just my opinion, as of today.  It could change tomorrow.

What this list does is provide a ranking of the top House seats expected to switch from Democrat to Republican.  I hope it’s helpful. 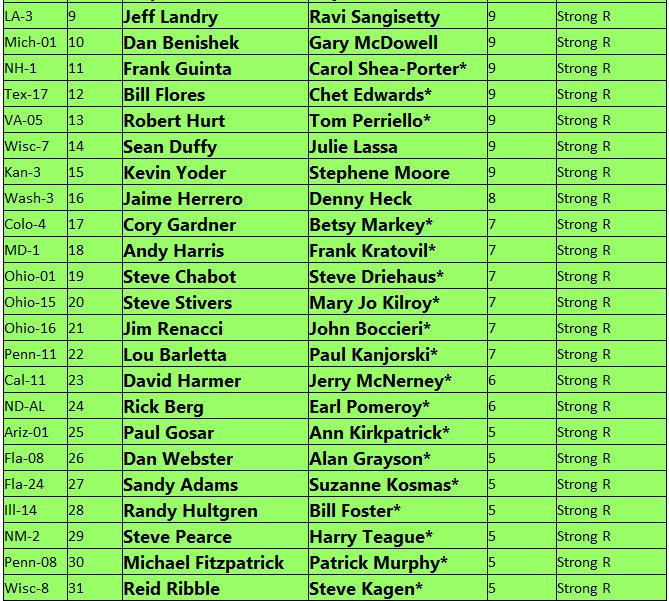 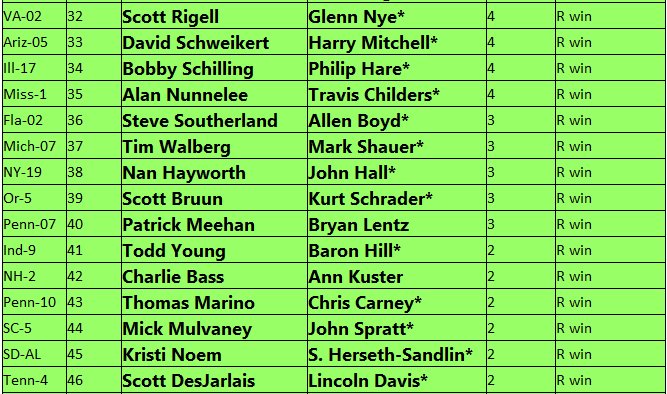 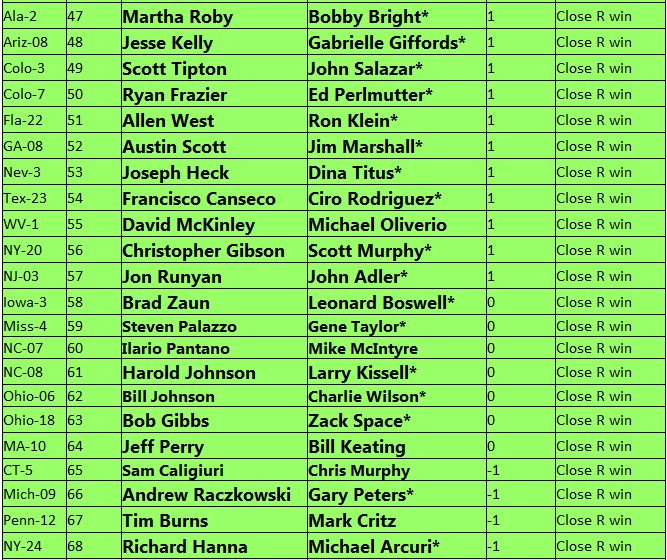 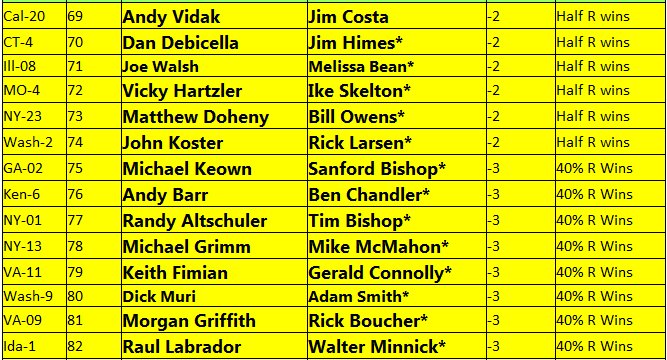 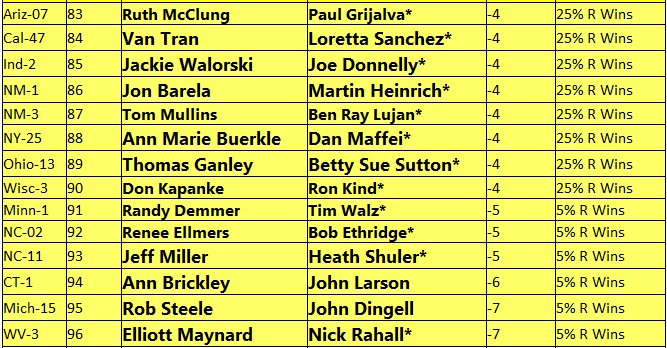 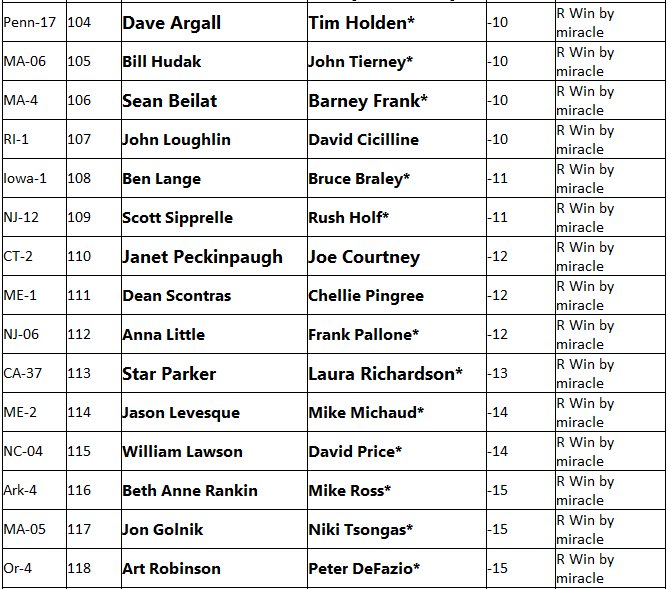 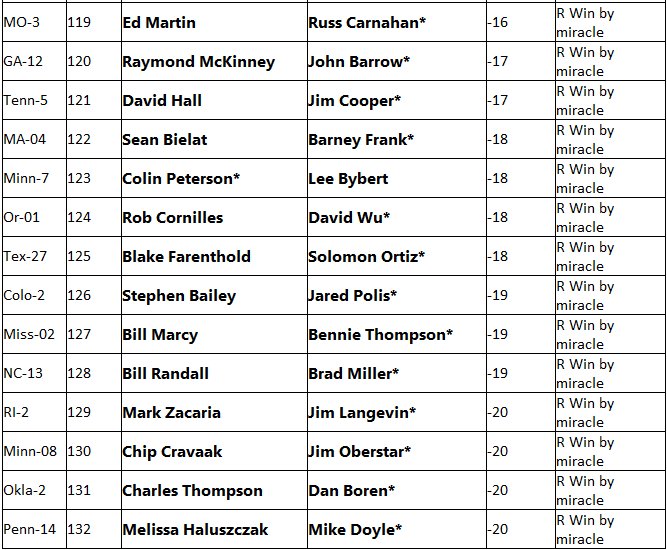