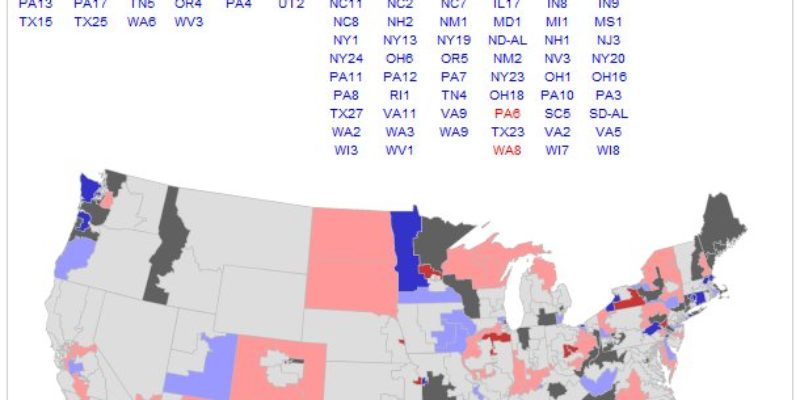 It’s nearly impossible to go through all 435 House seats in a post our readers could make it all the way through. Instead, we’re going to take a more general look at the races. And the best place to start is at RealClearPolitics.com, which has a map and a scorecard for us to have a look at… 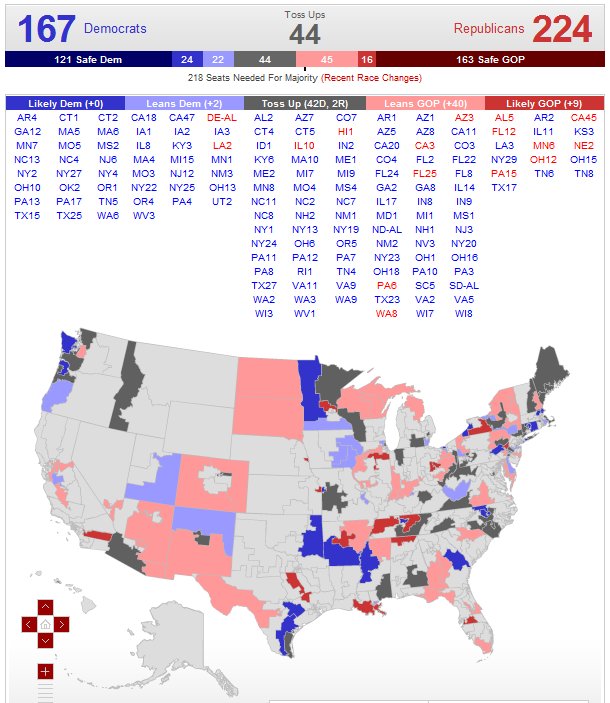 It’s fairly stunning stuff. It brings this to mind…

What makes a Demplosion such a possibility? Well, the obvious is the monster numbers released on generic balloting by Gallup (55-40 for the Republicans) and Rasmussen (51-39 for the GOP), both of whom indicate that the results tomorrow could indicate a generational shift away from the Democrats.

Quoth Rasmussen: “If these results hold, it could lead to the election of more Republicans to Congress than at any time since the 1920s.”

That gets Commentary’s John Podhoretz thinking something we believe is quite possible:

Never before on election day have Republicans even led on the generic ballot (the question Gallup asks is whether the person polled will vote for a Republican or a Democrat). In 1994, the best midterm for Republicans in our time, the final Gallup tally had the two parties tied.

This is why people are saying something is happening here that has never happened before. The “poll of polls” at Real Clear Politics, which averages out all reputable surveys, has the Republican advantage tonight at 8.7 points. Which means even if you think Gallup is screwy, there’s still no way to avoid the conclusion that Democrats are in for a horrific day tomorrow.

But wait. There’s more. The Gallup number today is 55-40 assuming a voter turnout of 45 percent nationally. It is assumed that the higher the turnout, the better the number is for Democrats owing to the Democratic edge in the number of registered voters. Fine. 45 percent. Except that the midterm in which more voters participated than any other in the past 28 years was 1994 — and in that year, turnout was 41.1 percent. This year, a voting expert named Michael McDonald thinks the number could be a record-breaking 41.3 percent.

Think this through. An amazing number for turnout would be around 41 percent. Gallup is using a model predicting 45 percent turnout — that’s a differential of 10 percentage points. On other words, Gallup might be wildly overstating the size of tomorrow’s electorate. And what does this mean? It means that the Republican advantage of 15 points might be low. Might be very low. That the actual Republican advantage might be closer to 20 points.

The low end prediction by Gallup of the number of House seats Democrats will lose at a 45 percent turnout? 80 seats. (The best Democrats can hope for, according to Gallup, is 55.) But what if the turnout model is off significantly, as is likely? Could the Democrats actually be on track to lose 90 seats or more? Could the best they can hope for be a loss of 70? (Sean Trende, the impressive number-cruncher at Real Clear Politics, says the Gallup number translates into a Democratic loss of 98 seats.)

The problem with these percentage guesses is that the Republican advantage is not evenly distributed across the country; it might be close to 30 percent in the Southwest but only a point or two in the Northeast. Republicans can’t win many more than 90 seats because they don’t even have a sufficient number of candidates to do so.

Just go back to RCP’s map above. It’s got the GOP holding 224 seats right now, which is a 45-seat pickup.

And then it has 44 tossups.

Will the GOP get all of the tossups? Probably not. Half of them indicates a 67-seat gain, which is still a butt-kicking.

But if you look a little to the left of the tossups, you see some seats RCP is counting for the Democrats which are not by any means done deals. At all.

Like for example, the 2nd District in Mississippi. Our own John Couvillion has polled that race, and he says Bill Marcy, who’s a solid conservative Republican who happens to be African-American, is basically tied with Bennie Thompson.

Or LA-2, which we think will probably go to Cedric Richmond thanks to some stupid meddling on the part of Tony Perkins and the Family Research Council over the weekend as well as a couple of other factors. But we’re prepared to be wrong, and the race is likely to be very close.

Or the 22nd District in New York, where Maurice Hinchey has turned his campaign into a gaffe-fest and is in real trouble against Republican George Phillips.

The 13th District in Ohio (Akron running northwest to Lake Erie) was a tossup until car dealer Tom Ganley, the Republican, got an October surprise – namely, that he was being sued for sexual harrassment. He denies the charge, but he pulled his ads. Conventional wisdom says Democrat incumbent Betty Sutton wins in a walk, but far stranger things have happened.

The 3rd District in New Mexico is another race RCP is giving the Democrats and perhaps shouldn’t be. The Republican gubernatorial candidate, Susana Martinez, is going to win BIG tomorrow night, and she’s got some coattails. That’s going to help Tom Mullins, a petroleum engineer who’s challenging Ben Ray Lujan, the incumbent Democrat. Mullins was down only 49-43 in a PPP/DailyKos poll done six weeks ago, and he waxed Lujan in a couple of debates since then. Mullins is one of the classic Tea Party candidates – wants to look at getting rid of the Department of Education, points out that “carbon is life,” favors a flat tax and notes that “poor people don’t employ anybody.” It’s a very Democratic district, but far less so than some of the other blue districts which are going red this year. Don’t be surprised if Mullins takes this down.

California-47 is the Loretta Sanchez-Van Tran race. We’ve discussed this one already on the Hayride, and it could go either way. RCP says this is a likely Democrat hold only because it’s heavily Hispanic; what polling there is on the race says it’s a tossup.

And the 4th District in Massachusetts has Barney Frank scared out of his tutu by Sean Bielat. The polls say Bielat is 10-13 points down, but they’re polls done by the local media – we’re talking local media out of Boston here; you can’t get any more left-leaning than that. Bielat’s internals show him within the margin of error.

There are quite a few other races where the conventional wisdom says the Democrats are going to hang on – but if you play the wave scenario out, RCP has 22 additional seats “leaning” to the Democrats beyond the 89 the GOP could gain by sweeping the tossups. That would be 111 potential seats gained tomorrow. Are we predicting that? No. Could three-quarters of that number come in? Yep. Is an 85-90 seat pickup possible? You bet. The prognosticators are terrified of making such a prediction, so instead they’re talking about gains in the 60’s but “it could go higher.”

The fact is, lots of these guys think it’s going to be 75-85 seats. They just don’t want to be the idiot out on a limb making calls like that. So you get mealy-mouthed statements like “I’m saying 60 seats, but it could go higher.”

It will go higher. There are too many races in play, too much Republican momentum, too many good GOP candidates and too much disgust with Democrat governance. There will be more than a net of 60 seats flipping from blue to red.