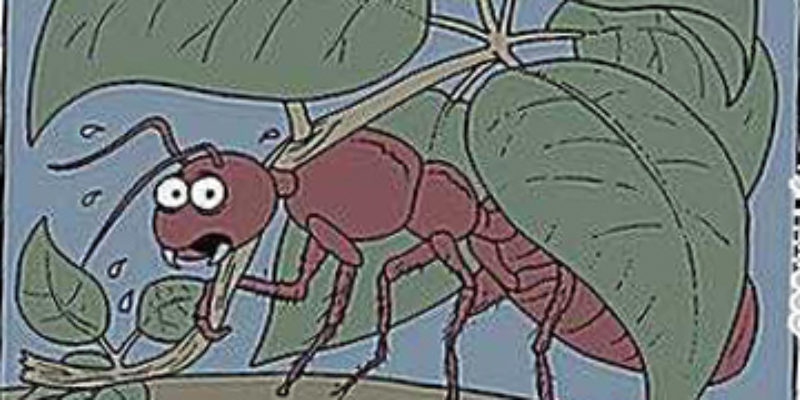 Wait, hang on. Before we get started we need some theme music here. How y’all like a little Frank Sinatra?

OK, that kid was kinda irritating. But it still fits.

Because we’ve got some ants with high hopes in Lake Chuck. They want to recall not just Bobby Jindal but Chuck Kleckley, too.

Governor Bobby Jindal’s education reform has already received approval from the house. But teachers across the state are even farther from approving the plan and Governor Jindal than before.

Several teachers will be traveling to Baton Rouge Tuesday to protest the approval of Jindal’s education reform as it makes its way into the Senate Committee of Education.

These teachers will be bringing along written support as well, in the form of petitions, petitions that would recall both Governor Jindal and house speaker Chuck Kleckley.

“Listen to us,” said teacher Angie Bonvillian. “Because they wouldn’t listen to us, then we decided we had to get their attention some way.”

Recall petitions. That was the method chosen by a group of local teachers to get the attention of Louisiana lawmakers regarding education reform.  The petitions are to recall the governor and speaker Kleckley.

“We want reform,” said Bonvillian. “We as educators…we love this. This is our livelihood. This is our passion. We just want it done the right way.”

Teachers across the state have opposed Jindal’s reform for many reasons. But for Andrea McFarlain, her issue is not tenure.

“I’m not opposed to the changes with tenure,” said McFarlain. “I realize there are teachers that need to be fired or need to be reprimanded in some way. That’s not my problem.”

Mcfarlain’s main problem lies in the accountability system lined out in the bills, and she’s not the only one.

“I think that they’ve put a lot of accountability on the teachers,” said teacher Anne Reeves. “I feel like a lot of the focus should be on the student as well as the parent. A lot of that begins and continues in the home.”

This is all union stuff. They musta got a call from the cheeseheads in Wisconsin fillin’ ’em up with ant-can-move-that-rubber-tree-plant happy-talk about how well those recalls work when you get all your comrades together. Why, they knocked off two state senators up there and only had to spend $30 million to do it!

Supposedly they’re also gonna meet with Chuck from Lake Chuck. That would be Kleckley, for those of y’all who went to public school. Bet he gives ’em a real warm reception with that recall petition, and all. Shoot, if it was me I’d sign the thing, and then I’d go put out a big fundraising letter to my campaign list screamin’ that they’re out to get me and I need your help to keep fightin’ the good fight and all.

Not sure what they expect Kleckley to do. He already passed the school choice bill and the teacher tenure bill through the House. Unless they expect him to trash the House’s own bills in a conference committee, they’re barkin’ up the wrong tree. They oughta go meet with John Alario; he runs the Senate. And they might want to knock over a few kids in the Lake Chuck schools for their lunch money – because at least in the old days if you can bring a paper bag full of nickels and quarters and an occasional C-note for his man Dan Robin you could get a bill killed that you don’t like.

That might be a long shot, though. Alario’s got a new deal goin’ now.

Thing is, people who show up with recall petitions in this state don’t have all that hot a record of success. They tried to recall Jindal in 2008 as a way to pressure him into vetoin’ that legislative pay raise, and got nowhere. And then last year my man Ron Ceasar made a hell of a run at a recall. Ceasar needed 908,000 votes to make Jindal face the music.

And he parlayed all that publicity into a strong run at Jindal’s job last fall.

OK, it wasn’t all that strong. He did finish in the
top ten, though.

Maybe those schoolmarms in Lake Chuck can give ol’ Ron a call and see if he can help. He’s gotta be worth at least 50 signatures on that recall petition, right?

Interested in more news from Louisiana? We've got you covered! See More Louisiana News
Previous Article Calcasieu Closes Schools, Teachers To Descend On Capitol Tomorrow
Next Article A Little Blast From The Past: Doing The Hadacol Boogie With Sen. Dudley LeBlanc