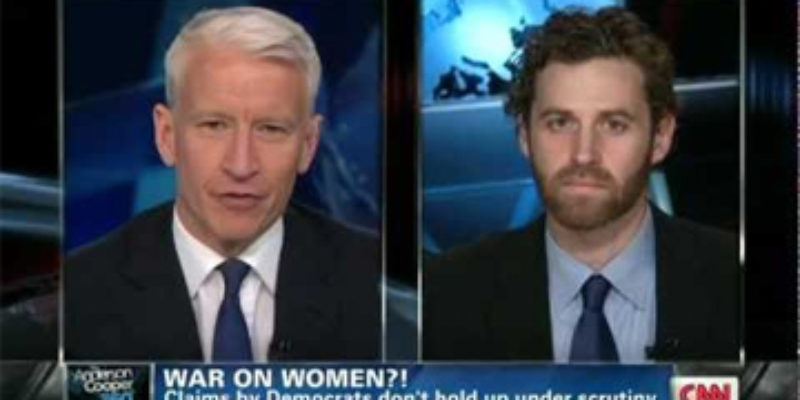 It’s hard to tell for sure. But Friday’s takedown of a silly MoveOn.org spokesman on the phony “War On Women” meme that outfit has been trying to push was worthy of O’Reilly.

Naturally, this was easy stuff. MoveOn.org wouldn’t send that kid onto Fox News’ air knowing he’d be cut to pieces. They sent him on Cooper’s show figuring he’d get softballs. And of course they were wrong; he was completely unprepared and Cooper wiped the floor with him.

But the kid’s reaction to getting some adversity was instructive. This sure looks like somebody who grew up playing in one of those “everybody gets a trophy” soccer leagues, and it’s clear he’s never done a single bit of real work in his life.

The kid’s name is Justin Ruben, and here’s his bio at MoveOn’s website…

Justin Ruben is the Executive Director of MoveOn.org. He’s been on staff since 2004. Most recently he was MoveOn’s Organizing Director, and he supervised the organization’s day-to-day online and offline campaign work. He’s also the primary architect of MoveOn’s field organizing program. Justin helped launch MoveOn’s initial organizing efforts in the 2004 elections, and he created MoveOn’s network of local member councils. In 2006, he ran MoveOn’s “Call for Change”, a voter turnout effort that recruited more than 100,000 volunteers to make seven million calls to voters in key House and Senate districts and helped tip Congress to the Democrats.

Justin’s been working as an organizer on labor, environmental justice and fair trade issues for 13 years. Before he joined MoveOn, he was as an organizer for the Hotel Employees and Restaurant Employees Union (HERE) in New Haven, CT. And he got his start as a community organizer working for Pesticide Watch in Fresno, California, helping neighborhoods deal with the health impacts of pesticide pollution.

An Eagle Scout from New Haven, CT, Justin has a Masters of Environmental Management from the Yale School of Forestry and a B.A. in Environmental Biology from Dartmouth College.

These days, Justin spends his days in Austin, TX, with his wife, Autumn Leonard, and their two adopted dogs, Abzug and Medgar. When he is not staring at a laptop or attending a MoveOn house party, he likes walking in the woods, watching bad movies, and mountain biking.

Guy went to Yale and studied forestry so that he could become a union organizer. Are you interested in subsidizing his student loans?