Tom Bonnette had an outstanding piece here yesterday about the New Living Word School, the church-sponsored school in Ruston run by Rev. Jerry Baldwin which opened up 315 spots for kids who would qualify for school vouchers under the recently-passed education reform program.

It seems that the educational establishment and their political stooges are having a festival of sorts over the revelations in a Monroe News-Star piece last week about the fact that New Living Word School is still an educational startup. Its facilities aren’t as nice as the public schools are, it uses a great deal of DVD instruction in the classroom, and it doesn’t have the physical space to accomodate 315 new students if it were to get them.

And all of these factors are being used to trash the voucher program as a whole. Sen. Mary Landrieu, who has mounted a campaign of passive-aggressive sniping against the reform plan, took aim yesterday with New Living Word School as a poster child for how bad the voucher program is…

The senator said she supports education reform and strategic use of vouchers, but Landrieu said Jindal’s package passed during the current legislative session “was much too broad.”

“You see what happened at the school in Ruston,” she said. “I kept telling (the Jindal administration) that it had to tighten up the language in the voucher bill. Vouchers should be part of the reform movement, not the entire reform movement. Public money shouldn’t be leaving the system with no accountability.

“The idea is to provide a way out for children who are stuck in failing schools to move to established, well-run private institutions to provide better education than what they were getting before, and that most certainly does not seem to be happening in the Ruston situation. I think the governor and (Superintendent) John White have some explaining to do and some tightening down of the rules and regulations.”

Landrieu’s statement is a laughable one, of course. When she alleges that vouchers are the entire reform movement, she obviously neglects the other elements of it. Namely, the legislation providing a tax break for business people and other folks with money to fund scholarships for kids to go to private schools. Or the teacher tenure reform. Or the expansion of charter schools. Vouchers are, in fact, a very small part of the reform movement – there were only 5,100 voucher spots offered by private schools in the state in its initial report, which is a far cry from the numbers being thrown around to the effect that Louisiana would be funding private education for some 230,000 kids.

But the most interesting – and educational – part of Landrieu’s statement is this idea that public money is “leaving the system” without accountability and that the New Living Word School is evidence Louisiana is throwing cash away on a fake school.

I don’t know anything about New Living Word School. What I do know is that a lot of the countries who are kicking America’s rear end when it comes to educational performance are doing it with facilities our educational establishment would say constitute child abuse. Here’s a classroom in Shanghai…

Well, guess who topped the OECD’s 2010 study in educational performance where math is concerned. Who topped them in reading?

Who topped them in science?

Do they spend $8,500 per year per student in China? No. There are no numbers available on that score, but considering the U.S. average isn’t even $8,500 and the per-capita income in China isn’t close to $8,500 it’s an outstanding bet they’re not spending anywhere near the money Baldwin is seeking from the state of Louisiana for those education vouchers.

Now – is Baldwin going to be able to deliver the quality of education they do in Shanghai? Probably not. At $8,500 per student, if he can get anywhere near 315 kids to enroll on those vouchers, what he will be able to do is get the resources to put facilities together for the new kids and hire up enough teachers that he could conceivably build a competitive school.

The politicians like Landrieu who were too cowardly to mount a full-on opposition to the education reform package – and we’re not just picking on Landrieu here, because there were lots of Republicans like Jody Amedee and Bob Kostelka who took the opportunity the News-Star piece gave them to play Defender Of The Public Fisc by hammering education superintendent John White on the New Living Word School case in a Senate hearing this week – wouldn’t allow Baldwin the chance to try.

White noted that New Living Word’s performance with the pre-K kids they have enrolled has been very promising, but that didn’t move the needle. Instead he was instructed to consult with the superintendent of schools in Lincoln Parish about New Living Word.

In other words, talk to the competition and see if those folks are interested in losing students, and the funding that goes with them, to a new player in the market. How do you think that conversation’s going to go?

I have no brief for Baldwin. Baldwin was the head football coach at UL-Lafayette a few years back and he went 8-37 in four years. When the school decided he wasn’t the right guy and fired him, Baldwin sued them and alleged that the firing was racially motivated. He has the right to sue if he thinks he’s been wronged, certainly, but suing when you get fired for winning just two games a year doesn’t say great things about your character.

On the other hand, we all fail in life. None of the politicians who want to trash Baldwin and call him a charlatan are perfect, either. Mary Landrieu refused to answer phone calls from irate constituents after she sold her Obamacare vote and then, when somebody showed up to make a gotcha film about her unresponsiveness, she sicced the federal marshals on them. Nobody is particularly holier-than-thou here.

Let’s also remember that the folks the News-Star and the politicians are supposedly trying to protect from Baldwin would only get the opportunity to be screwed by him as a result of the fact they’re already being screwed by the lousy public schools in the area.

And Lincoln Parish spends $9,951 per student per year.

Is it impossible for Baldwin to do better with some of those kids than the public schools are doing? The parents and kids who would choose his school obviously don’t think so. Why is it that politicians know how to make those choices better than the parents and kids do?

Bob Kostelka was an educrat before he ran for the Legislature. He’s not exactly an unbiased source. If Mary Landrieu has been to Ruston since New Living Word School opened – much less visited the place – I’d be surprised. Why do these people think they have the right to tell the local folks qualifying for vouchers on account of the fact the government schools their kids are in now are failures which schools they can choose?

Maybe the Jindal administration was right to put the power into the hands of the parents. Maybe there are parents out there in Ruston who think there is value in a Christian education such as the one Baldwin is offering that offsets his not having fancy facilities. Maybe they want those values taught to their kids, and maybe Baldwin is offering discipline the public schools up there don’t. Maybe the fact it’s a small school associated with a church means parents will find value in the community aspect of New Living Word School.

Maybe a lot of things.

This could fail. If it does, the market will kill it – and Baldwin will have a rough time paying off the bank loan for his new school building without any voucher or tuition money once the parents decide he’s not doing a good enough job. 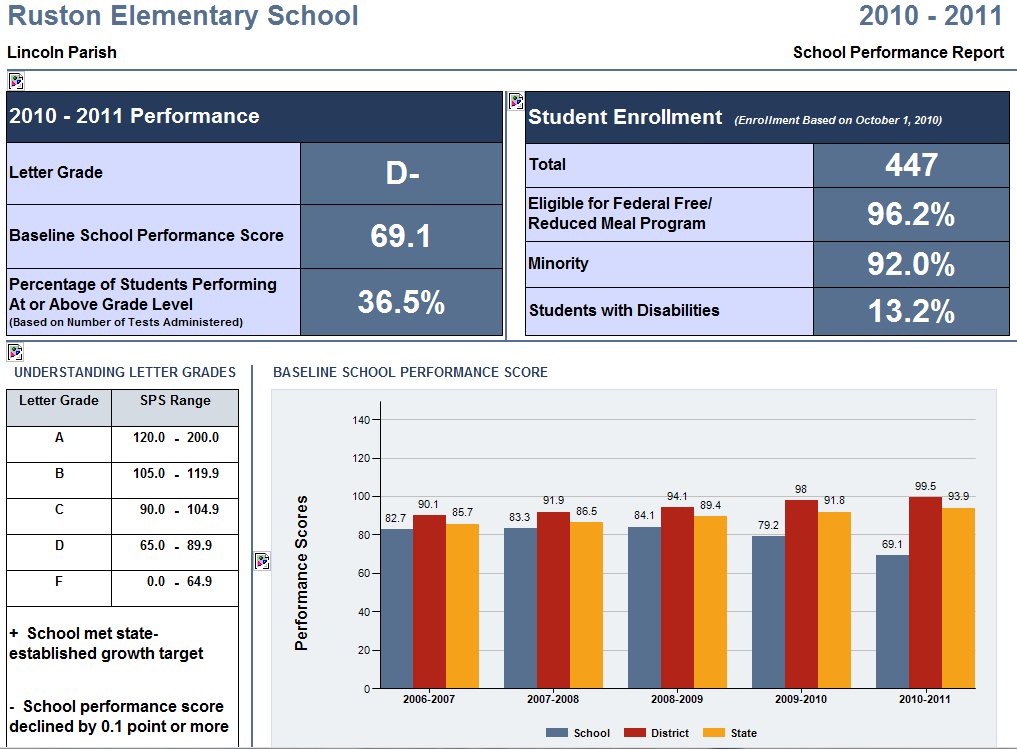 How ’bout that shiny 36.5 percent of students at grade level, huh? Fabulous, isn’t it?

What Landrieu and Kostelka and the folks at the News-Star are saying is that there is no way a preacher at a black church can do with $8,500 per student as well as a public school whose performance scores have cratered in the past three years can do with $10,000 or so per student.

You can take whatever lesson you want out of that. The lesson I’ll take is that Landrieu and her cohort in the New Living Word lynch mob aren’t out to protect parents. They’re out to protect crappy public schools like Ruston Elementary.

Interested in more news from Louisiana? We've got you covered! See More Louisiana News
Previous Article The New Living Word School Example—This Is The Way Vouchers Are Supposed To Work
Next Article FIELD: I’m Retiring From The Public Service Commission