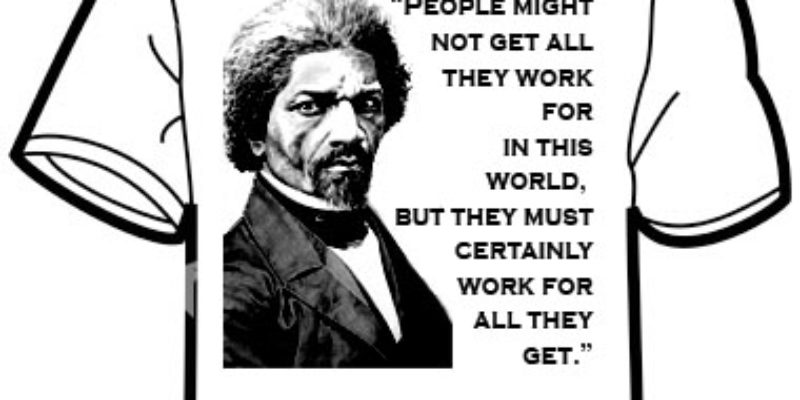 Considering that Douglass, who still stands as America’s original – and most effective – civil rights leader, was a key inspiration in founding the Republican Party and a relatively chronic officeholder under Republican presidents in the post-Civil War era, and considering Douglass’ oratory and writings mark him as one of the most articulate defenders of the American ideal to this day, it’s an item of inexplicable stupidity that a party which is now casting about for an entry into the political mind of the black community wouldn’t grab him and put him to use.

That video comes courtesy of the Frederick Douglass Republicans, an organization devoted to promoting his legacy.

Douglass has been largely forgotten in American culture, save for the appearance of Frederick Douglass characters in the films Glory and Amistad. Among black historical figures he’s been trumped by Malcolm X, which is ridiculous – Douglass, born a slave and facing 19th-century institutional racism, fought against far worse odds and adversity than Malcolm X ever did, and Douglass’ philosophy was far more radical. And more, Douglass didn’t need to withdraw from American society – Douglass succeeded greatly in it. On his death, he had amassed a fortune worth $25 million in today’s dollars as an inspirational speaker, publisher and entrepreneur.

And Douglass’ writings and oratory contain some of the most incisive, articulate statements defending American values and the principles of our founding fathers anyone has ever made – statements which are as timely today as they were when he made them…

“Once you learn to read, you will be forever free.”

“It is easier to build strong children than to repair broken men.”

“I prefer to be true to myself, even at the hazard of incurring the ridicule of others, rather than to be false, and to incur my own abhorrence.”

“If there is no struggle, there is no progress. Those who profess to favor freedom, and yet depreciate agitation, are men who want crops without plowing up the ground. They want rain without thunder and lightning. They want the ocean without the awful roar of its many waters. This struggle may be a moral one; or it may be a physical one; or it may be both moral and physical; but it must be a struggle.”

“Knowledge makes a man unfit to be a slave.”

“Where justice is denied, where poverty is enforced, where ignorance prevails, and where any one class is made to feel that society is an organized conspiracy to oppress, rob and degrade them, neither persons nor property will be safe.”

“The soul that is within me no man can degrade.”

“People might not get all they work for in this world, but they must certainly work for all they get.”

“I prayed for freedom for twenty years, but received no answer until I prayed with my legs.”

“Power concedes nothing without a demand. It never did and it never will.”

“To suppress free speech is a double wrong. It violates the rights of the hearer as well as those of the speaker.”

“A gentleman will not insult me, and no man not a gentleman can insult me.”

“I would unite with anybody to do right and with nobody to do wrong.”

“Without Struggle There Is No Success”

“In a composite nation like ours, as before the law, there should be no rich, no poor, no high, no low, no white, no black, but common country, common citizenship, equal rights and a common destiny.”

“It is not light that we need, but fire; it is not the gentle shower, but thunder. We need the storm, the whirlwind, and the earthquake.”

“Man does not plan to fail, he just fails to plan.”

“I had as well be killed running as die standing”

“The life of a nation is secure only while the nation is honest, truthful, and virtuous.”

“A man who will enslave his own blood, may not be safely relied on for magnamity.”

Douglass embodied virtually everything the modern conservative movement embraces. He hated the concept of black dependency, rejected the racist assumption that the color of a man’s skin should dictate his destiny and recognized that education, skill and character, not ethnicity, were what make a man.

Douglass is as relevant to modern conservatism as Ronald Reagan is. His ideas were fundamental to the founding of the GOP. And we’ve allowed him to be lost to history when he offers us a road back to relevance with the constituency he so ably championed during his lifetime.

Take your Che Guevara t-shirt and shove it. We’ll have one of these… 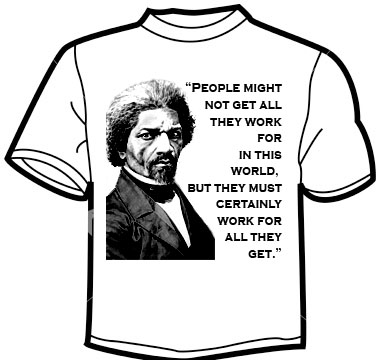