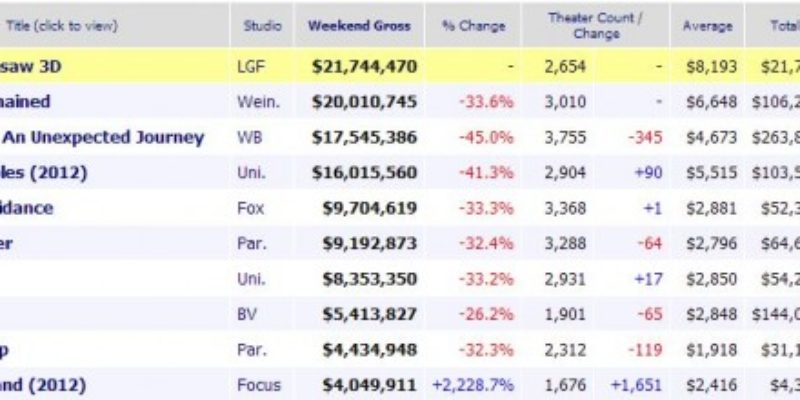 Promised Land certainly got a sizable media push in advance of its box-office debut over the weekend, and the UAE-funded leftist vehicle attacking the supposed ill environmental effects of hydraulic fracturing has been thrown into the Oscar mix thanks to a strategic New York-Los Angeles advance screening on Dec. 28.

So the thinking was that the film would take off as a sleeper hit at the box office.

Well, it’s a lot more of a sleeper than a hit. The weekend box office rankings…

At least it made it into the bigtopten.com top 10…but barely.

But a $2,416 per screen average is HORRIBLE. By comparison, the 8-week theater run for another intensely political film, Dinesh D’Souza’s documentary 2016: Obama’s America saw an average per-screen revenue figure of $4,303 – and in its first week of semi-wide release (it was in 1,091 theaters in Week 7 of its theatrical run) it did $5,966 per screen.

Promised Land did $2,416 per screen in its opening weekend. That’s a disaster.

Matt Damon makes lots of bombs, by the way. Syriana, Green Zone and Hereafter were losers as well. Sure, he’s in some big-budget winners, but when he lets his politics decide what projects he’s getting involved in the results stink.

Left-wing movies as a whole generally suck at the box office, as it turns out. But they do manage to move the culture based on the sheer volume of them, and the lack of a counterweight from the other side since Hollywood’s conservatives are generally in the closet and there are so few “conservative” movies made.

When they’re made, though, they generally blow away the Left’s propaganda at the box office.

Here’s a question: what if, instead of writing giant checks to people like Karl Rove to produce hundreds of millions of dollars in forgettable poll-tested pablum campaign spots, the major conservative donors like Sheldon Adelson, Foster Friess, the Koch Brothers and Bob Perry put up some cash to open a movie studio outside of Hollywood – like, for example, in New Orleans, where there are more film projects being worked right now than almost anywhere and where there is already a sizable work force of gaffers and grips and sound engineers available to be snapped up for salaried jobs?

And what if said studio was to reach out to the Hollywood conservative community and sign up actors, writers and directors who are in the closet as conservatives because they’re terrified that to speak out politically would ruin their prospects of getting work? The guess is that once half the country sees some of these people as they are, lots of careers could really take off because to support their films doesn’t require swallowing or ignoring some of the more idiotic or hypocritical off-screen baggage they offer. For example, Jeremy Renner (The Bourne Legacy, The Town, Hansel And Gretel: Witch Hunters, Marvel’s The Avengers, Mission: Impossible – Ghost Protocol, The Hurt Locker, 28 Weeks Later) practically never makes a movie which doesn’t involve gun violence…and there he was on that ridiculous public service announcement demanding gun control. Conservative or libertarian writers, actors and directors who are more interested in offering more traditional American cinematic fare and preaching less about the necessity for government to run our lives would certainly be less obnoxious – and perhaps more bankable.

And what if that new hopefully well-funded enterprise were to begin cranking out titles from a center-right philosophical framework?

Here’s a small list of movies you will never, ever see made by present-day Hollywood…

If you give it some thought, you could come up with literally hundreds of potential movie properties that might have commercial value but that Hollywood would never make. Instead, we get movies about Hansel and Gretel growing up and shooting witches, endless sequels of movies about plastic toys, comic books turned into films…and Promised Land.

The market demands better, and so does the culture. There’s a hole to be filled because people like Damon refuse to satisfy audiences.

Interested in more national news? We've got you covered! See More National News
Previous Article Wait, Lemme Get This Straight…
Next Article Oscar’s Farks Of The Week, All Your Guns Are Belong To Us Edition