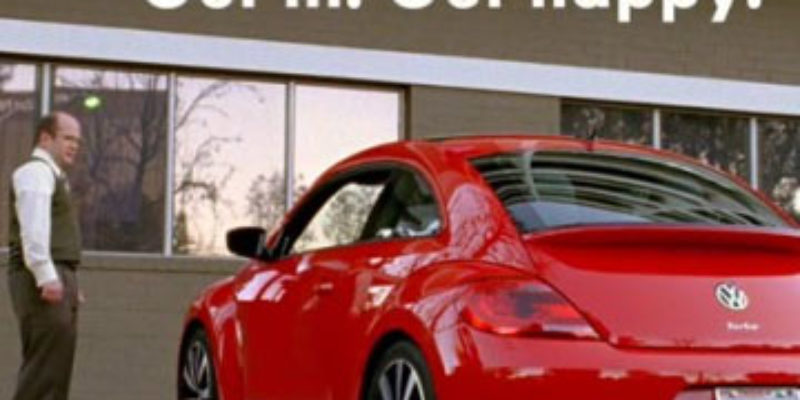 …and then explain how it’s racist.

The white guy buys a VW and he’s happy as hell. He’s so happy that he picks up a Jamaican accent, because people who’ve been to Jamaica and a lot of other Caribbean tourist destinations can tell you, you tend to associate those places, where the accents are pretty similar…with happiness.

But because most of the people in Jamaica aren’t just happy but black, a white guy picking up a Jamaican accent is a racist guy. And showing that on TV in a commercial is, y’know, racist.

“It’s pretty horrific,” says Ricki Fairley-Brown, president of the multicultural marketing agency Dove Marketing. “Why do they have a white guy from Minnesota faking a Jamaican accent?”

Even more troubled by the spot is Rochelle Newman-Carrasco, chief hispanic marketing strategist at Walton Isaacson, an African-American, Gay/Lesbian and Hispanic agency. “What happens in this ad is that the culture becomes a punch line, and that is offensive.”

Pop cultural guru Barbara Lippert is not amused, either. “It made me uncomfortable to see all of those white people in an office setting doing this,” she says. “I found it offensive.”

A question: how many registered Republicans or Libertarians do you think work at Dove Marketing or Walton Isaacson?

Answer: not bloody many.

We found Ricki Fairley-Brown’s bio at Dove Marketing’s website. Here’s what it says…

She holds the Leadership Award from the Creative Thinking Association of America and was named a Top 100 Marketer by Black Enterprise Magazine in February 2011.

Fairley-Brown holds a BA from Dartmouth College and an MBA from Kellogg School of Management at Northwestern University. She is the President Emeritus of the Black Alumni of Dartmouth Association, serves on the Board of Kenny Leon’s True Colors Theatre Company, the Board of the Latin American Association, Ne-Yo’s Compound Foundation Board, and the Executive Board of the Magnolia Chapter of The Links, Inc.

In other words, she’s a professional bullshit artist, and when USA Today called she couldn’t wait to pimp her firm by expressing her faux outrage.

Besides, Dove Marketing has on its website this image, with a caption of “Your baby’s ugly”…

If we’re going to go discobiscuits about happy Jamaican accents and how racist that is, why does the ugly baby have to be white? Aren’t there ugly black babies, or ugly Inuit babies, or ugly Arab babies?

Considering that only one of the eight bios on Dove Marketing’s website are of white people (we think that’s a white girl, though perhaps not), it seems incredibly insensitive for its principal to be attacking white folks for the accents they affect on TV.

And then there’s Walton Isaacson, which bills itself as “The planet’s most interesting agency.” You can thank these people for helping to pioneer “branded entertainment,” meaning plastering corporate logos all over every concert, music video and so on.

Walton Isaacson makes a big deal out of how they got the contract to sell Lexuses to black people. Nothing boring or racist about that, either.

Nothing on their site talks about how they’re an “African-American, Gay/Lesbian and Hispanic agency.” Unless “the planet’s most interesting agency” is code for that – in which case we’d like to know why it is that straight white people aren’t interesting, and why can’t we talk about how bigoted it is to make such an insinuation, and who’s going to interview us about how offended we are at that.

See how easy this game is?

How much of this carping from Dove Marketing and Walton Isaacson is an attempt to take a dump on Deutsch LA, the rival advertising firm which is producing the VW spots? Chew on that if you like. If there’s something to that, it’s a bit of an ethical thing, no? Start a fight among the public over somebody else’s work, and if it goes against Deutsch maybe you can make a pitch for the VW account.

Crappy way to do business, if that’s what’s going on.

Finally, we have Barbara Lippert, who used to work at AdWeek as an ad critic – no, seriously, they paid somebody to gaze down her snout at commercials – until she got herself canned last month. And now she has a new gig…

“We’d always thought it would be interesting to have someone on staff whose job it would be to stay in touch with popular culture,” Mr. Goodby said, because of the interplay between advertising and pop culture, as well as “be our emissary and talk about the agency” at conferences, meetings and other forums.

“I don’t want it to be a P.R. thing,” Mr. Goodby said in a phone interview on Friday, but rather for Ms. Lippert to “communicate with the world and know about the world.”

If you’re getting a Seinfeld vibe from this, you’re not alone. This woman has a job about nothing. Not a lick of real work is expected of her.

And she “communicates with the world” so effectively that her Twitter feed hasn’t been updated since January 17. She follows 421 people and has 1,375 followers.

That’s what’s known as “pathetic” for somebody who gets paid to “communicate with the world and know about the world” as “someone on staff whose job it would be to stay in touch with popular culture.”

USA Today notes that when the Today show polled its viewers about the ad, NINETY-THREE PERCENT said they liked it.

You can’t get 93 percent of the people to agree the sky is blue. They loved this ad.

Know who else loved this ad?

The Jamaicans, that’s who.

So does Wykeham McNeill, Jamaica’s minister of tourism and entertainment. “We view it as a compliment,” says McNeill. “People should get into their inner Jamaica and get happy.” He’s even negotiating with VW for some sort of co-branding.

We can pretty much all agree it’s funny.

Can we pretty much all agree the clowns at Dove Marketing and Walton Isaacson, and Barbara Lippert, aren’t qualified to tell us what to think? We have a bunch of ad flacks whose jobs basically entail chopping us up into demographic profiles and setting us off against each other for fun and profit now finding something which is universally acceptable and using it to further set us off against each other – in order to promote themselves.

USA Today, which is (a) looking for a story to sell, and (b) scraping the bottom of the barrel to find reasonably acceptable mouth-breathers among the seven percent to come up with something ugly to say about the ad, probably doesn’t help the situation. But the whining about the VW ad began before that article was published.

You want to quote Rodney King and ask if we can’t all get along, don’t you? The answer is no, we can’t. And the reason we can’t is assholes like the folks quoted in that USA Today article. In this case they’re just seven percent of the population. But they’re a loud seven percent, and they can ruin it for the rest of us.

They can, and they are. Aren’t you tired of the bitching?

Interested in more national news? We've got you covered! See More National News
Previous Article A Cautionary Tale For Drunks Who Wanna Accost Reporters While They’re On Air
Next Article All Together Now: Awwwwwwwwww