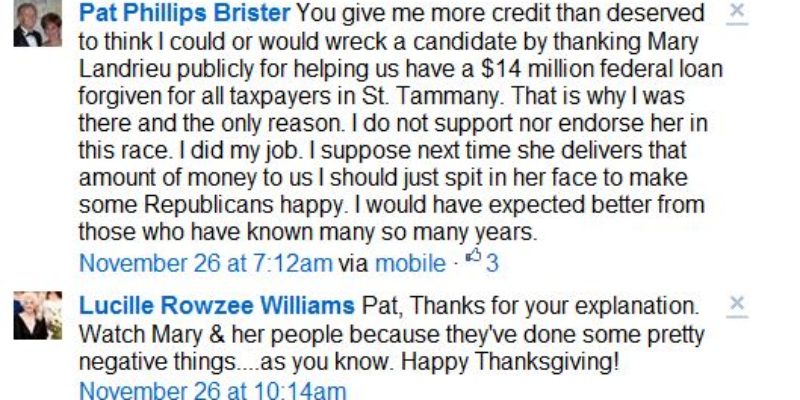 One piece of video which turned up at Monday’s Baton Rouge Press Club presentation by state sen. Karen Carter Peterson, the chair of the Louisiana Democrat Party, was a cringe-inducing set of kudos to some non-traditional allies of that party in the upcoming Senate race…

Boysie Bollinger we all know about – he’s the prominent Republican campaign donor who owns Bollinger Shipyards, and he’s a Landrieu backer because she’s on the Senate Appropriations Committee and the Senate Homeland Security Committee, and that means Bollinger Shipyards’ position as the builder of Coast Guard cutters is directly affected by how hard Landrieu works to get them that contract.

So Bollinger, who donates oodles of dollars to Republicans all over the place, donates to and endorses Landrieu (not to mention the checks he writes to other Democrats on those committees). Nobody should be particularly pleased with that arrangement, but there is some sense to be made of it.

But Pat Brister, the former Louisiana GOP chair and current St. Tammany Parish president who appeared at a Landrieu fundraiser last fall to speak in glowing terms of the work the senator is doing, has a bit of a different problem. Because everybody in Louisiana can hate Boysie Bollinger and he couldn’t care less, but if 50.1 percent of the folks in St. Tammany Parish get the cold-and-pricklies for Brister she’s out of a job in the next election.

And since St. Tammany is just about the most Republican parish in the state, it’s not great politics for Pat Brister to be seen as a Mary Landrieu fan. Particularly given that Brister’s predecessor Kevin Davis endorsed Landrieu back in 2008, which infuriated lots of people and all but insured that Davis’ future in elected office outside of St. Tammany was kaput (he tried running for Lt. Governor in the 2010 special election, and promptly got his butt kicked, coming in 4th place out of eight contestants with only eight percent of the vote). Davis managed to get himself appointed as the Director of the Governor’s Office of Homeland Security and Emergency Preparedness in 2011, but there’s talk he might run for his old job – the one Brister currently holds. Other than maybe going for the state legislature, that’s all Davis has available at this point.

And while Davis will have a hard time trashing Brister on the Mary Landrieu issue given his history, it’s a good bet somebody else might do it.

Knowing this, Brister made a big show of saying that she has NOT endorsed Landrieu. From an e-mail out of her office which circulated in the state’s political world back in November when the news hit about Brister’s appearance at Landrieu’s Mandeville fundraiser…

President Brister has not endorsed anyone for the 2014 Senate race, and has said publicly that she will not. She introduced Senator Landrieu at a women’s issues luncheon and took the opportunity to thank the Senator for her legislative effort in FEMA’s forgiveness of the Parish’s $14M Community Disaster Loan obligation. Parish President Brister graciously thanked someone that worked to save the people and taxpayers of St. Tammany Parish an enormous amount of money, as she would any Legislator.

And then there was this exchange on her Facebook page… 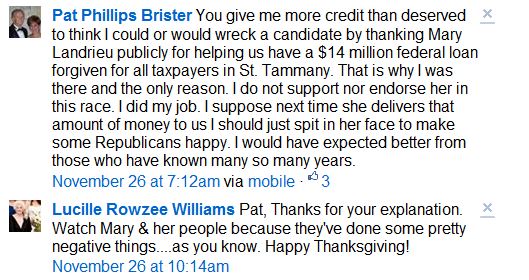 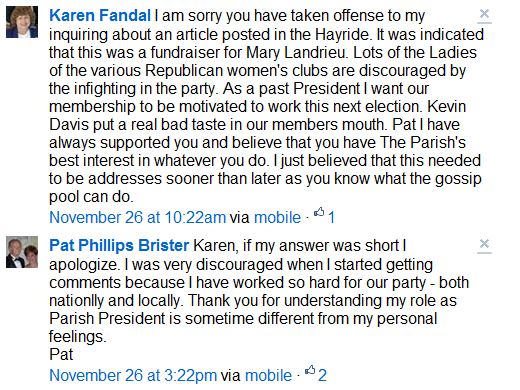 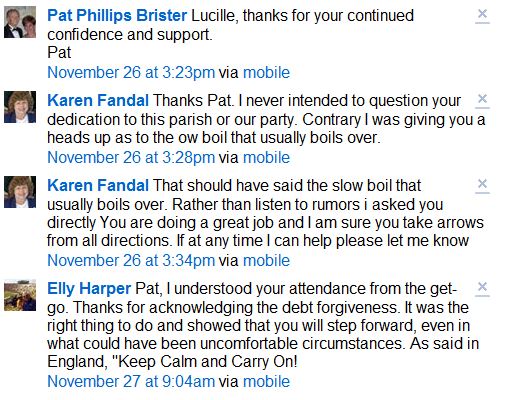 A quick point to make – we didn’t actually do a story on Brister and Landrieu back in November; that was the Dead Pelican. What we did was note that it was one of the “women’s fundraisers” that Landrieu has been doing around the state which was the “unbelievable work on behalf of the people of Louisiana” that kept her from appearing with Barack Obama when he came to New Orleans in November, and that another one was scheduled for Mandeville. That turned out to be the fundraiser at which Brister spoke.

At the time it appeared that the donnybrook over Brister’s kind words for Mary had passed.

And then along comes Peterson to claim that Brister is supporting Landrieu, which, as we’ve noted, Brister claims not to be guilty of.

This is the gift that keeps on giving for Brister, and it puts her in an unenviable position. If she were to repudiate Landrieu and any notion that she supports the Senator’s re-election, the next time St. Tammany wants $14 million in federal loans excused there had darned well better be somebody else in Landrieu’s seat or else it’ll be Brister’s fault when she gets told to “talk to the hand.” But if she ends up following Davis’ example and endorsing Landrieu, or even maintaining neutrality, then she can forget about her good odor with the Republican Party she used to chair since this is the best opportunity yet to install somebody from the GOP in the seat Mary has managed to keep away from them in three straight elections.

And if Brister were to end up with a set of goat’s horns in the event Landrieu wins re-election, she becomes Kevin Davis 2.0, and she could be in an uphill fight for re-election in 2015 – and not just against Davis. There are a few fairly prominent Republican state representatives from St. Tammany, and some of them are term-limited.

The thing is, we don’t really have much advice to offer Brister. It wouldn’t be a bad idea for her to show up the next time Bill Cassidy has a fundraiser in St. Tammany and say nice things about the work Cassidy has been doing in DC, like where flood insurance is concerned, or on health care or energy. It wouldn’t even be a bad idea for her to say some nice things about the two other Republican candidates in the Senate race, Paul Hollis and Rob Maness, given that both of them come from St. Tammany. And the egg on Peterson’s face if Brister were to make an endorsement of Cassidy, Hollis or Maness would probably turn Brister into a heroine.

But like the old saying goes, if you strike at the king you must kill him. So if you’re Brister, the endorsement game can carry some major risks if Landrieu gets re-elected and she needs something from the federal government. Or conversely, if she were to become Kevin Davis 2.0 and endorse Landrieu, and then Cassidy were to win, she’s just made an enemy of the state’s new big-shot in Washington who’d like to endorse somebody else for St. Tammany parish president in 2015.

That’s one reason why it might have been a good idea to send a written note one of the ladies could read at Landrieu’s Mandeville fundraiser thanking her for that loan relief. Getting her picture taken for Landrieu’s Twitter has caused a running political mess for St. Tammany’s parish president.