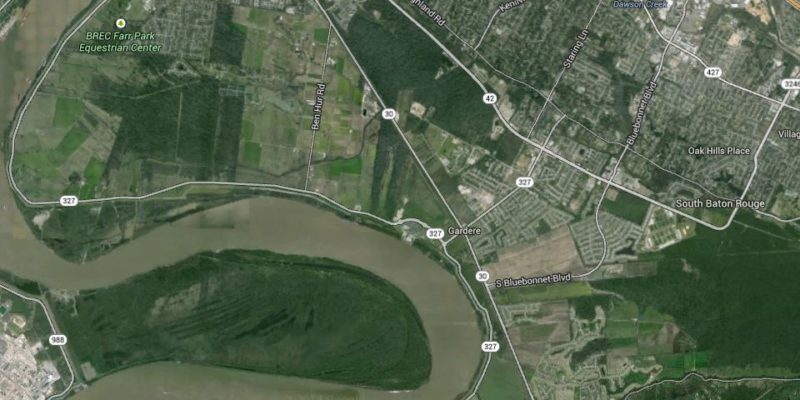 You had to parse the statements of Lionel Rainey and Norman Browning, two of the main players in the movement to incorporate the city of St. George in the southern part of East Baton Rouge Parish, to really understand the implications of last week’s news that the City of Baton Rouge is in negotiations to annex the revenue-producing Mall of Louisiana in advance of the election that could produce Louisiana’s newest city.

After a presentation by the two on three bills at the state legislature which were filed as attempts to kill the incorporation effort, Rainey was asked about the implications of a potential annexation of the Mall by the city of Baton Rouge. His answer was interesting. Diane Samuels of NOLA.com had a good summary…

The mall is a major sales tax revenue generator for the parish — money that would go to the city of St. George if it incorporates, and that leaders of that effort were counting on in their proposed budget. If the mall is annexed, Rainey said, “then we’ll reevaluate what we have and what we agreed to pay for.”

The St. George campaign leaders have promised that, if the city is created, it will fund all of the “constitutional offices” that are currently paid for out of the parish’s budget, such as the district attorney, coroner and district court. The cost of those offices totals about $17.7 million, nearly a third of the $60.3 million in expenses accounted for in St. George’s proposed budget.

Asked if he meant that the mall annexation would lead St. George to no longer pay for those constitutional offices, Rainey replied no, that it meant they’d reevaluate their budget. For now, they are in a “holding pattern” to see what the city and mall do, he said.

“Obviously we would have to look at expenditures if revenue is taken away,” he said.

The Mall’s sales tax revenues are about equal to the cost of those constitutional offices. What Rainey is saying is that if the Mall were to go into the city of Baton Rouge, it’s entirely within the realm of possibility – and more than that, it’s damned likely – that the promise by the St. George people to continue paying for those offices would go by the boards.

As Metro Councilman Ryan Heck outlined in a breathtakingly revealing post here at the Hayride last week, tax dollars flowing through East Baton Rouge Parish go into a number of different buckets – those for the cities of Baton Rouge, Zachary, Baker and Central, and another for the unincorporated parts of East Baton Rouge Parish, the vast majority of which would become St. George if the incorporation effort succeeds. The bucket for the unincorporated areas, Heck notes, is filled to a small extent with revenue sources dedicated to things like the Baton Rouge Recreation Department (BREC), emergency medical services and a few other things, and thus funds them.

But the unincorporated bucket funds a lot more than that…

Now, I’d like to explain a little about annexation vs incorporation. Both are legal rights in our state constitution and our local plan of government. But there’s a fundamental difference.

The St. George effort isn’t taking, stealing, or borrowing one inch of land from the City of Baton Rouge. They are merely seeking to incorporate areas that are currently not incorporated. Nothing actually moves. An imaginary line is drawn around a legally defined area. What they are doing is attempting to create their own bucket. Maybe more like re-label the bucket that’s already theirs, i.e. the East Baton Rouge Parish bucket, as that’s where their taxes currently go.

Of course, if they are successful, there will still be East Baton Rouge Parish bucket, it just won’t be as full.

Annexation, on the other hand, is the transfer of one or more pieces of land from one area to another. Its legal, and has many beneficial uses. However, in this case, the selective annexation of certain areas has a significant impact on the well being of areas that already pay more than their fair share into the bucket.

If St. George Fire loses significant amounts of revenue from this potential annexation, it will still have to deliver services to the same amount of homeowners, because the City of Baton Rouge is just taking some highly selective revenue-generating properties, not the proportionate amount of residences that the money pays for fire protection.

Country Club of Louisiana, Santa Maria, Jefferson Terrace, etc… They could all see negative impacts if the annexation occurs as is.

This is the crux of the Baton Rouge establishment’s opposition to St. George. If St. George happens, the honey pot Baton Rouge has been drawing from, which funds a city payroll beyond anyone’s imagination and a school system which gives probably the worst bang for its buck of any in the state, dries up fairly quickly.

And so Mayor-President Kip Holden is in the midst of attempting a land grab that would net him the Mall of Louisiana and the $20 million or so in sales tax revenue annually the Mall would offer.

The counter to this, if you pay attention to what Rainey is saying, is that if Holden wants the Mall he can have it. Except along with the Mall comes the obligation to use its tax revenue to pay for the constitutional offices, because St. George is going to walk on paying those.

And for St. George, it’s a wash. Baton Rouge gets the Mall, and now Baton Rouge can pick up the cost of police and fire protection for it. And since the Mall’s revenues currently pay for something like a quarter of the St. George Fire Department’s budget, moving it into the City of Baton Rouge puts that budget in jeopardy of being gutted. Turns out that there are parts of incorporated Baton Rouge which get fire or EMS protection from St. George Fire, too, and those parts will suffer from that budget cut unless the City of Baton Rouge is willing to turn loose the money to make the fire department whole.

Their recent history indicates that it isn’t likely Baton Rouge would ride to St. George Fire’s rescue. There is a highly uninspiring story of how the Powers That Be at City Hall have treated the St. George Fire Department – including Metro Councilman John Delgado’s attempt a few weeks ago to stack that department’s board with his stooges and thus wipe out its leadership.

What this means is that now fire protection is a reason why it’s imperative to create the city of St. George. Originally this was all about creating an independent school district. Then it became about money and the political power to distribute it.

Now it’s also about whether your fire department is going to be gutted and the fire rating of your community jacking up the cost of your homeowner’s insurance if you live in what would become St. George.

But Holden gets the Mall of Louisiana, so he’s still happy.

Another question: why on earth would the Mall of Louisiana want to be annexed into the city of Baton Rouge? On the surface it would seem to be a pretty dumb move.

First, if the Mall went into the city, it would be doing so knowing that it would be subject to higher property and/or sales taxes in the future, if not immediately.

Second, the Mall doesn’t currently have to pay the CATS tax, which would be a seven-figure bill. They’re going to say the Mall isn’t subject to the CATS tax, because the taxing district which was created to pass that tax included the current borders of the city and that district would remain regardless of whether the city’s borders changed. But you can bet your bottom dollar that issue will be litigated, and heavily, as soon as this annexation were to happen if it does. 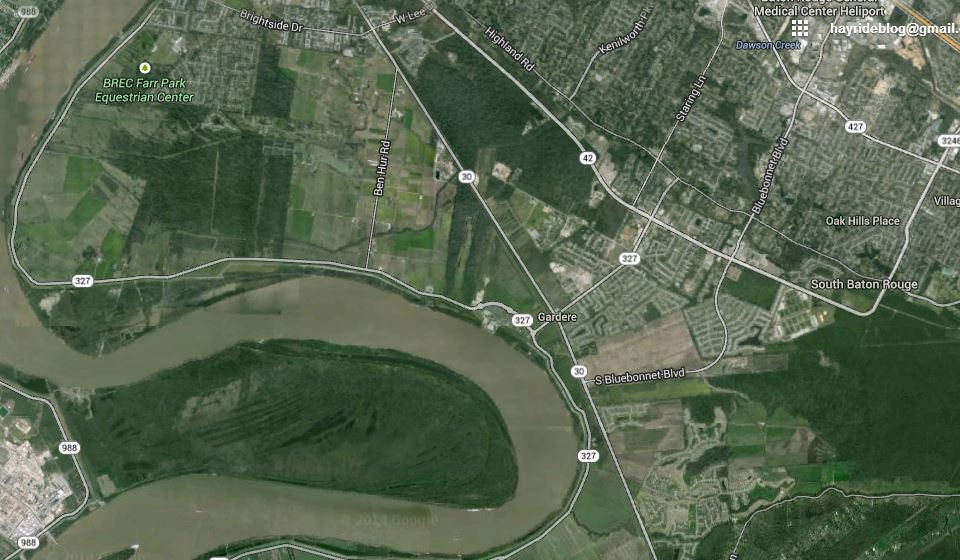 Notice something about this image? What you might notice is that there is a whole lot of “greenfield” in the southwestern part of the parish – virtually all of which is in what will be St. George. In fact, there is something like 10.6 miles of undeveloped riverfront property along the Mississippi within St. George’s borders. And there are acres and acres of undeveloped property which could be turned into retail space.

As in, a competing mall to the Mall of Louisiana.

You folks know what happens when a new mall opens. The new mall becomes the place everybody wants to go for shopping…at the expense of the old mall.

Yes, there would need to be additional transportation infrastructure built in St. George to accomodate a brand-new mall should one be built. That’s hardly a problem.

After all, between Brightside Drive and Ben Hur Road there are no cross streets connecting with River Road. And from Ben Hur to Iberville Parish there is only one – Gardere Lane.

Staring Lane only goes as far as Burbank Drive. Kenilworth Parkway stops at Highland. Bluebonnet Boulevard actually makes it as far as Nicholson Drive. None go to the river. That isn’t an accident; if you build infrastructure out to the river, you’re going to get development along the river.

And the Powers That Be in Baton Rouge want riverfront development, but they want it downtown. Anywhere but downtown? Not so much. Outside of downtown, the Wrong People own the land that would be developed, and the Wrong People don’t belong to the right clubs and civic organizations, don’t donate to the right causes and don’t have the right political connections.

The owners of the Mall of Louisiana are a big company up North. They don’t know or care about all of this and it’s a good bet they haven’t thought it through.

But what Rainey is saying, though he’s not committing to it, is that if Holden thinks he’s executed some sort of coup de grace by getting the Mall and therefore making St. George impossible – he couldn’t be more wrong. If anything, annexing the Mall of Louisiana might actually be counterproductive.

That, of course, isn’t a surprise. Virtually everything Holden and his cronies have done since the St. George effort began has been counterproductive to actually stopping people from wanting to sign that petition. Why should this be any different?

Interested in more news from Louisiana? We've got you covered! See More Louisiana News
Previous Article They Actually Got 53 Votes For The Idiotic ‘Dogs In Pickup Trucks’ Bill
Next Article BAYHAM: The Holy Bible And Official State Business