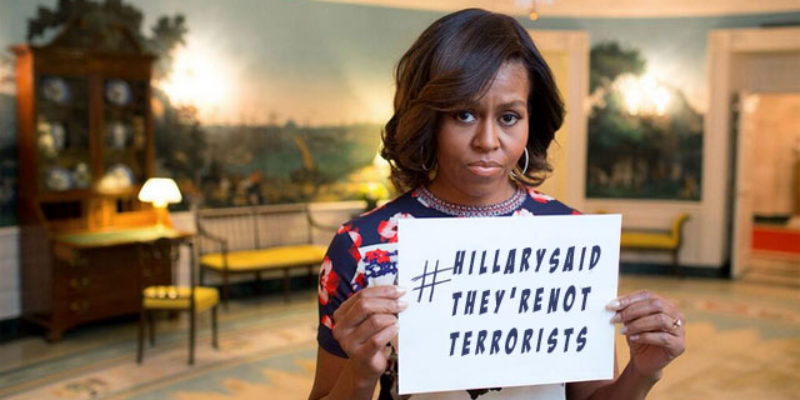 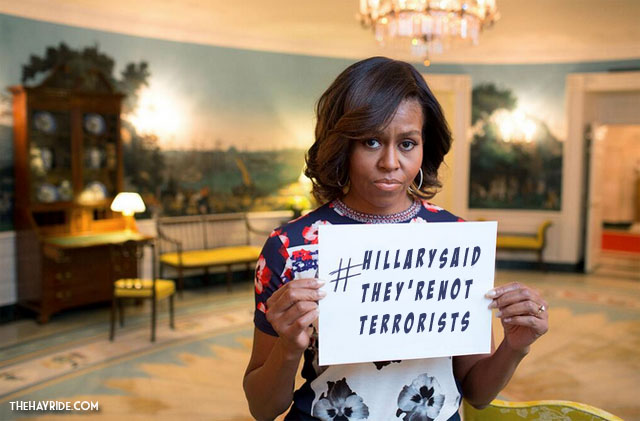 I hope our readers realize that three different things are going on which make it impossible for Hillary Clinton to be president.

1. Monica Lewinsky has now re-entered the national consciousness, and it turns out that Monica Lewinsky is a bit more sympathetic figure than Hillary Clinton is – and who has suffered far more for mistakes she made when she was young (the beejer she gave the president when she was a White House intern) than Hillary did (getting fired for lying as a young attorney working on the Watergate select committee).

2. The naming of a select committee in the Benghazi affair, which while it certainly might lead to the White House as the source of the coverup will likely get there after rolling over Hillary’s dead political body.

3. Boko Haram and their fresh round of atrocities, which bring back to light the fact that Hillary Clinton blocked the State Department from naming that Al Qaeda-affiliated terror group a terrorist organization. This was done for the same stupid purpose which ultimately led to Benghazi – namely, the false narrative that Al Qaeda was on the run, had been decimated and was no longer a threat. Policies were crafted in order to make U.S. government actions conform to that narrative rather than reality. And the effect in Benghazi was four dead Americans; in Nigeria it has been the kidnapping and human trafficking of some 300 Christian girls into what will surely be slavery.

Any one of the three demonstrates Hillary Clinton’s thorough lack of fitness to be president. If you revisit the Monica Lewinsky affair and Hillary Clinton’s nonsensical blaming of that fiasco on the “vast right-wing conspiracy” with the knowledge we currently have, she is less sympathetic than she was as First Lady – and the idea we would return to that level of executive debauchery by putting that family back in the White House is not one which would withstand a presidential campaign. Hillary’s stature in her own right has advanced in recent years for two reasons; one, the Democrat Party which has desperately needed her husband’s good behavior despite the obvious animus between the Clintons and the Obamas has done everything possible to protect her, and two, the Democrats have absolutely no bench for 2016 and thus cannot afford to have her damaged as a prospective candidate.

Couple that with presidential polls supposedly reflecting a campaign which hasn’t even begun yet, and there is a facade of legitimacy and popularity surrounding Hillary. Once she’s a candidate, particularly given her positioning as the “celebrity” presidential contender, especially within the Democrat Party, the personal issues represented with Monica Lewinsky’s resurfacing are horribly inconvenient to say the least.

Benghazi and Boko Haram cut to her legitimacy, or lack thereof, on a more substantial basis – namely, that she was an utterly atrocious Secretary of State. For all the yabbering about the hard work Clinton did in that job during the first term of the Obama presidency, she is hard-pressed to name a single major accomplishment as America’s top diplomat. Clinton’s tenure in that office began with the mis-translated “reset button” with the Russians which has a definitive provenance leading to the events currently taking place in the Ukraine; it must be remembered that the reason a “reset” with Russia was supposedly needed was that the Bush administration had all but frozen diplomatic relations with that regime following its invasion of Georgia. “Reset” was tantamount to “appeasement.” And, having been appeased in Georgia, Putin eagerly pressed his luck with the Ukraine when the opportunity presented itself. The argument can and should be made that it was Clinton’s policy setting that in motion.

And while Russia is a far greater failure than Benghazi or Boko Haram, it’s easier to justify that failure. How do you justify a failure to protect your people in advance of the Benghazi attack, a failure to move military assets to the scene (or request such a move) when the attack came and a mendacious characterization of that attack as inspired by some YouTube video after the fact? How do you justify a refusal to designate a murderous Al Qaeda affiliate with a trail of blood and tears covering multiple nations as a terror group?

Hillary Clinton is easily beatable in 2016, because hers is a record of failure covering many subjects and many years. She has not been presented as such to date largely because the Democrat-friendly mainstream media knows that their party’s bench – Elizabeth Warren, Joe Biden, Martin O’Malley, Andrew Cuomo, Bernie Sanders , Janet Napolitano – is utterly empty. But as events develop and 2016 nears, the facade of Hillary The Inevitable is going to melt away.