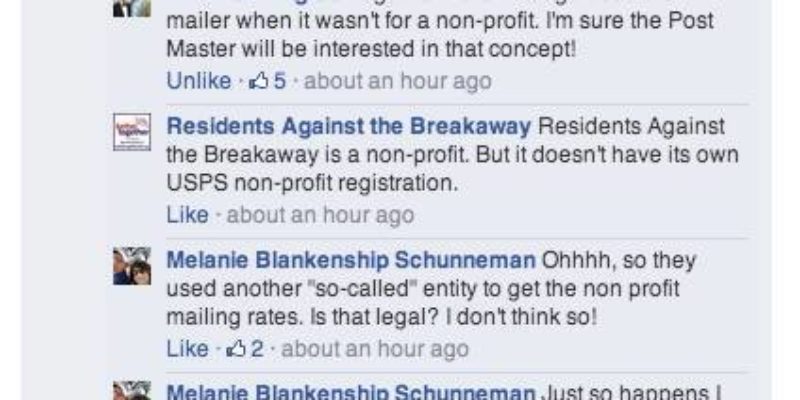 WBRZ-TV’s Chris Nakamoto, who is rapidly gaining notoriety as a pretty darned good investigative reporter, went up with a story last night on the matter of this Together Baton Rouge/Better Together/Residents Against The Breakaway anti-St. George mailer we talked about here at the Hayride last week. And this is beginning to get good. Make some popcorn for this one.

Here’s a link to Together Baton Rouge’s statement. As Nakamoto reported on TV, they claim they’re solely responsible for the mail piece and nobody else had anything to do with it.

Except there’s a problem. Namely, this… 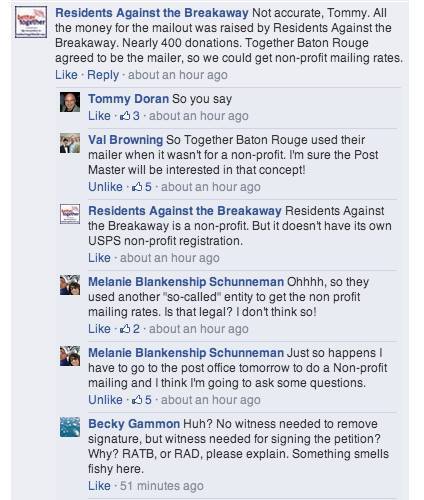 Together Baton Rouge’s statement says “Together Baton Rouge did not delegate or lend the use of its non-profit mailing status to Residents Against the  Breakaway or any other organization. We designed, contracted for and sent out the mailer directly on our own behalf.” Notice how “paid for” isn’t included in that statement?

You’re not allowed to take money from somebody else to do a mail piece on your non-profit mail permit.

Per the U.S. Postal Service, as Nakamoto reported…

The Postal Service is currently researching the issue involving a recent nonprofit mailing  in Baton Rouge, LA. Local postal officials continue to investigate the matter, to ensure  the Postal Service’s assets and revenues are protected. Postal regulations, found in the  Domestic Mail Manual (DMM), Section 703.1.6.1, stipulate that an authorized nonprofit  organization may not delegate or lend the use of its authorization to mail at the Nonprofit  Standard Mail prices to any other person or organization. Upon completion of our  investigation, the Postal Service will notify the appropriate organizations regarding a  final ruling.

We’ve been told that Together Baton Rouge’s head honcho Brod Bagert has been calling everybody he can in order to try to shut this story down. We’re not sure what Bagert thinks he can accomplish – he doesn’t get to tell the Post Office what’s a violation of their regulations, and he doesn’t get to tell Channel 2 what’s news. What is sure, though, is this mailer has become a major debacle. And Bagert and his organization looks like a bunch of lawbreakers.

Maybe what we can talk about as this story develops is whether this rises to the level of mail fraud.

Interested in more news from Louisiana? We've got you covered! See More Louisiana News
Previous Article The Strange Case Of SB 636, And Its Effect On St. George
Next Article Low Popahirum, Louisiana Edition (5-30-14)