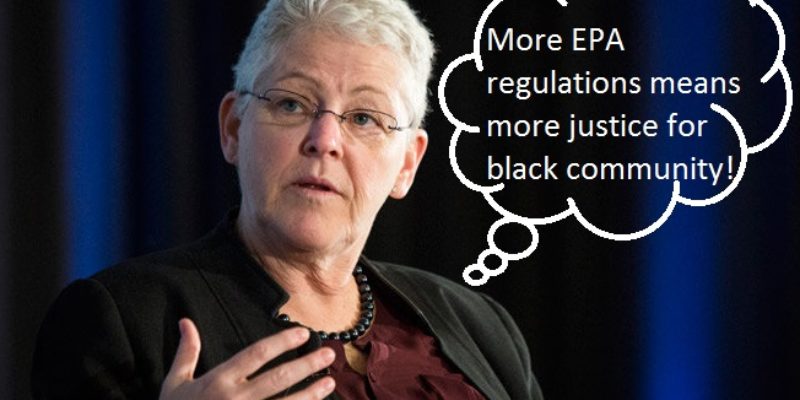 The new carbon regulations by the Environmental Protection Agency are not what you thought they were intended for.

According to EPA Administrator Gina McCarthy, the strict regulations, which will be detrimental to the power grid, are about serving justice for black communities. This is what McCarthy said in full:

“Carbon pollution standards are an issue of justice,” said EPA Administrator Gina McCarthy in a teleconference call with environmental activists. “If we want to protect communities of color, we need to protect them from climate change.”

“Asthma disproportionately affects African-American kids,” McCarthy added. “In just the first year these standards go into effect, we’ll avoid up to 100,000 asthma attacks and 2,100 heart attacks — and those numbers go up from there.”

“These standards are also doing more than to just address public health. By the time these standards are fully in place in 2030, the average household will also save $8 a month on electricity and create thousands of jobs that can’t be shipped overseas,” McCarthy said.

McCarthy was speaking with environmentalists with the group Green For All, which promotes itself as an outreach organization that helps get blacks involved with fighting global warming. This is what the green group’s website says:

“Green For All acknowledges the need to disrupt the current economy, because we understand that our current economy was based upon human trafficking, the exploitation of labor, and violent racism,” according to the group’s website. “We are safe enough to be invited into spaces where power-building groups are not, and radical enough to push a deeply justice-based agenda in those spaces. We are radical enough to partner with grassroots organizations when other national groups are turned away, and enough of an ally to offer resources and support in those spaces.”

The EPA regulations will likely close this Louisiana Peach Orchard. And just in the state, the new federal ozone standard could put 117,000 job equivalents at risk annually and cost the state’s businesses $189 billion in added compliance costs, according to a study by NERA Economic Consulting for the Louisiana Association of Business and Industry (LABI) and the National Association of Manufacturers (NAM).

A stricter ozone standard could also reduce U.S. Gross Domestic Product by as much as $3.4 trillion through 2040 and dramatically increase energy costs across all sectors.

Rep. Bill Cassidy (R-LA) has criticized the EPA regulations as a ‘job killer,’ and has said the regulations will ultimately raise electricity bills across the country.

Interested in more national news? We've got you covered! See More National News
Previous Article If This Happens, Impeachment Will Be A Generous Result
Next Article BRIGGS: The Pump Price Says It All