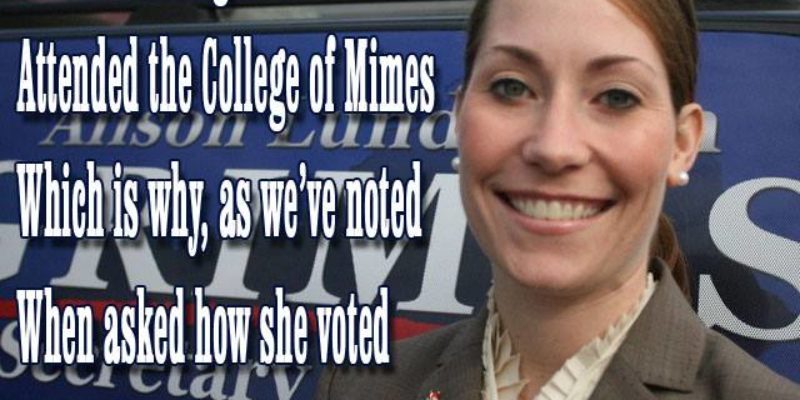 The most obvious of these, and most recent, came from the President himself. At a speech Thursday at Northwestern University, Mr. Obama dropped the line every Democrat House and Senate candidate least wanted to hear. “I am not on the ballot this fall,” he said. “Michelle’s pretty happy about that. But make no mistake: these policies are on the ballot. Every single one of them.”

If ever there was a politician who had lost his magic touch and became a liability, it’s Barack Obama, whose approval ratings have dived into the low 40s nationally and are significantly lower than that in several states holding key Senate races this fall.

Normally, a president in such odor with the public would take pains to do no harm to members of his party by inserting himself as an issue in a Senate campaign. But Obama, whose entire political existence has been marked by a combination of blind arrogance and charmed incompetence on the campaign trail, is no normal president. By throwing his policies in the faces of the candidates he presumably hopes to help elect, when those policies are so demonstrably unpopular, is a blunder that could only come near the end of a career spent failing up in grand style.

That column was actually a reset from a previous piece talking about the failings of the GOP in crafting a coherent, credible message for its own voters.

It turns out that this is perhaps the most content-free election cycle Republicans have had in a couple of decades. What is the Republican message this year? Nothing really stands out, does it? Sure, Obamacare is terrible, and yes, Obama’s performance is worse. But the GOP is pushing…nothing. No economic agenda beyond the standard lower-taxes, lower-regulation stuff everybody already knows. Nothing at all on immigration, though individual candidates are pushing it when their records don’t prevent them from doing it. Some discussion of foreign policy but no galvanization around a central message. Nothing of substance on the social issues.

It’s like a Seinfeld episode. It’s a campaign about nothing. This is exactly what the GOP establishment inside the Beltway wanted, and most of the time it’s an agenda which gets them slaughtered on Election Night when they find out that their own voters are too bored and irritated to turn out.

But this year? This year it doesn’t appear that the lack of any substance is a problem for Republicans. Compared to what Obama and the Democrats have on offer plenty of nothing is a winner.

Consider that yesterday Obama gave a reprise of his stupid “my policies are on the ballot” statement. In an interview with Al Sharpton (Obama going on Sharpton in the first place doesn’t really do a lot for Mark Begich, Bruce Braley, Mark Udall or Mark Pryor, now does it?), the president had this to say…

“And so some of the candidates there — it is difficult for them to have me in the state because the Republicans will use that to try to fan Republican turnout,” Obama said.

Obama went on to say that his feelings weren’t hurt by Democrats reluctant to campaign with him.

“These are folks who are strong allies and supporters of me, and I tell them, I said, ‘You know what, you do what you need to do to win. I will be responsible for making sure our voters turn out.’ ”

Can we agree that if you’re Obama, and Senators of your party are running away from you in states where voters disapprove of you by a 2-1 margin, the best policy would be to allow them to achieve some distance from you?

He can’t seem to do that. And he isn’t the only destructive force within the Democrat Party all but insuring an implosion in two weeks.

We give you Wendy Davis in Texas, who accused Greg Abbott of opposing interracial marriage. Greg Abbott’s wife is Hispanic.

And there is Mark Udall, running for the Senate in Colorado, who completely blows it when asked about books he’s read…

Bruce Braley usually makes his own gaffes, but two weeks ago Michelle Obama pinch-hit for him by repeatedly calling him “Bruce Bailey” at a campaign stop, which set the sycophants at the Washington Post to declare that forming words is hard work.

Which is something Mark Pryor can agree with – since he turns into a grunting simpleton when asked about Obama’s Ebola response. And that’s actually a more intelligent answer than you get when you ask him to define the middle-class in Arkansas.

Pryor had to follow his Ebola grunting with a call for a travel ban. That isn’t quite a flip-flop since “uhhhhhhhh” isn’t a definitive statement. But Jeanne Shaheen had actually formed words opposing a travel ban, so when she now touts one she’s made an official reversal.

So has Kay Hagan, who is now pounding the drums about how terrible Obama’s Ebola policy is less than a week after saying the opposite. One wonders whether that has anything to do with the fact more than 100 soldiers stationed at Ft. Bragg have deployment orders to Liberia in the face of the Ebola crisis and people in that state are more than a little concerned what’s going to happen to them when they do deploy.

Hagan’s problems don’t begin and end with the virus, though. She has a nice little scandal going with the fact her husband ripped off the federal government and pocketed federal energy-efficiency grant money on the sly.

We already told you about Mary Landrieu’s bad attempts at explaining her mansion in DC over the weekend.

And then there’s Allison Lundergan Grimes, who tried to make herself into Joan of Arc for refusing to say whether she voted for Obama in 2008 or 2012, out of a sense of “principle” in defending the secrecy of the ballot. That idiocy got her laughed at by the White House press corps, and the comedy hasn’t stopped. More lately, it’s Grimes’ warblings about raising the minimum wage which have been getting yuks from audiences – particularly given that the wait staff at the restaurant Grimes’ family owns are making even less than $7.25 an hour without tips.

And it looks like a very, very good Election Night for the GOP in two weeks – not because the party deserves it after reforming and refining its message or gaining a cultural or political initiative, but because the Democrats are imploding.

Interested in more national news? We've got you covered! See More National News
Previous Article The Results Of The Raycom Senate Poll Aren’t What’s Interesting About It
Next Article I Wonder If Lamar White Is Still Willing To Shill For Wendy Davis…