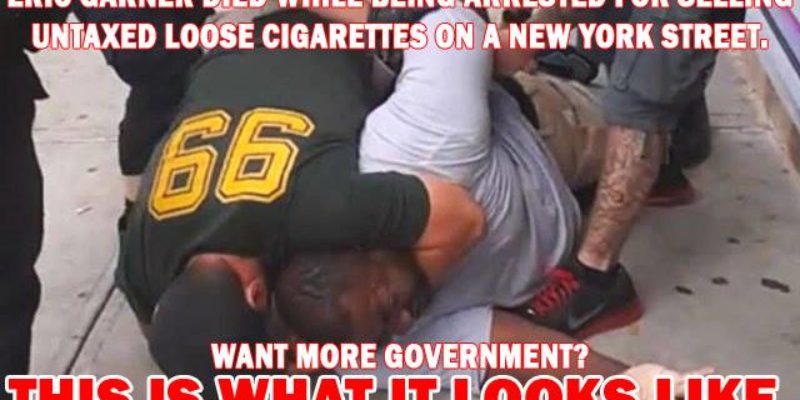 We’re looking down the barrel of what will likely develop into full-on rioting in New York City after the grand jury verdict in the Daniel Panteleo case.

Panteleo was the NYPD officer who applied a chokehold/headlock to Eric Garner, a black man on a Staten Island street who was engaged in selling “loosies” – loose cigarettes – as a black market item. Garner, who had a long rap sheet as a result of being a street vendor of contraband but was not a violent criminal by any means, verbally protested his arrest by the NYPD on the basis that he wasn’t hurting anyone and ought to have been left alone, and resisted being handcuffed. Panteleo then put him in a hold as four cops rushed him to take him down, and kept him in that hold after Garner repeatedly informed the officers that he couldn’t breathe.

Garner died from the incident, and the coroner’s report identified “compression of the neck” as his cause of death. Garner was obese, he was asthmatic and diabetic.

But Wednesday, a grand jury refused to return an indictment of Panteleo for applying the chokehold, and in the wake of the Ferguson mess it was the last thing the country needs. Last night in New York saw a wave of protests and a cacophony of screaming about racist cops, etc.

Was the grand jury’s decision appalling? Perhaps. We’re not going to weigh in on that question. You can make a good argument that a cop who kills a man on a street for the capital crime of selling loose cigarettes ought to damn well have some consequences attached to his actions, and we wouldn’t argue with that. Whether a criminal indictment is a productive consequence or not, we aren’t convinced. Garner’s family is filing a $75 million wrongful death suit against the NYPD, there will be a federal civil rights investigation and Panteleo, who has been reassigned, is highly unlikely to ever work as a cop again.

Here’s what we can say, though – regardless of all the Al Sharpton mugging for the cameras and idiotic #BlackLivesMatter protesters in the streets, race had nothing to do with Eric Garner’s death.

Why is Eric Garner dead? Because in New York City, cigarette taxes are the highest in the United States. As a result, “legal” cigarettes are unbelievably expensive…

When you take a product for which there is consumer demand and turn it into contraband by inflating the price beyond all reason through punitive taxation, the public will respond to that economic distortion by creating a black market.

And so there is a black market in cigarettes in New York City. One of the things organized crime syndicates engage in, along with drugs, prostitution and illegal gambling, is to smuggle cigarettes into the city from North Carolina and sell them out of the trunks of cars or through vendors like Garner.

And because people who want to smoke cigarettes are going to smoke them regardless of what the politicians say, those smokers happily purchase cigarettes on that black market – because it’s a lot cheaper than paying the tax-inflated prices the politicians have created.

This has been the case for decades in New York City, and with each new batch of politicians coming into office on the wings of nanny-state liberal doctrine which teaches you can perfect humanity with the right set of laws the cops are tasked more stringently with squelching the black market.

That’s why an entire squad of policemen descended on Garner as he was plying his wares on a street, and ultimately killed him. He was killed over a stupid cigarette tax.

This is the real outrage of the Eric Garner story. And it’s the real object lesson of the case.

New York’s mayor Bill DeBlasio, who is the absolute worst possible leader the city could have amid the new troubles that grand jury verdict has unleashed, responded to yesterday’s events by decrying the hundreds of years of racism extant in America as the cause of Garner’s death. This is an abject lie – Garner was accosted by the police not because he was black, but because he was breaking the law. Overaggressive tactics used to subdue him caused his death, but there is no evidence those tactics are used exclusively or even disproportionately on black people subject to misdemeanor arrests.

DeBlasio’s idiotic and grandiose statements will fan the flames of racial animus at a time they badly need to be doused, when in fact it’s DeBlasio and leftists like him who are the cause of Eric Garner’s demise. By creating the black market in which he worked with stupid policy, and by sending the police out not to give Garner a ticket or a summons but to actually subdue and arrest him, DeBlasio and his fellow liberals created the circumstances by which one minute a man might be selling cigarettes and the next he’s breathing his last with a policeman’s knee on his head.

You want an all-encompassing state with the power to stop you from smoking? Well, don’t complain about the Eric Garner case. This is what big government looks like.