Sen. Mary Landrieu (D-LA) was just ousted out of her Senate seat by Rep. Bill Cassidy (R-LA), so we figured we would eulogize her political career with a greatest hits list. Enjoy and feel free to leave your farewell comments below.

When Mary claimed Obamacare would save the govt. a “trillion dollars.”

“Between the Congress defunding it, Gov. Jindal refusing to expand healthcare coverage for people, we’re in a real battle but I’m glad to go back to Washington to fight for things that make people’s lives easier and better and we save the government a trillion dollars over time which people don’t hear but this new healthcare bill will save the government a trillion dollars over the next ten years,” said Landrieu.

When Mary and Boysie Bollinger had an expensive relationship.

Landrieu and Bollinger had quite the love affair this election cycle. In exchange for millions of dollars of federal funding and whatnot for Boysie’s shipyards by Landrieu, Bollinger would star in these cheesy political ad campaigns that were running on everyone’s televisions.

Here at the Hayride, we exposed the corrupt relationship between Mary and Boysie for what it truly was: A politician funneling millions into the corporate world and later getting paid back by an endorsement and TV ad campaign.

In the end, Boysie reaped the benefits.

When Mary illegally charged taxpayers for 43 private flights across the state.

During Landrieu’s tenure as our Senator, she managed to charge taxpayers for 43 private flights she took over the last ten years and she will probably get a slap on the wrist for her federal crime, if that. In 2013 alone, Landrieu cost taxpayers $43,000 and over the course of ten years, 1 out of every 10 flights that Landrieu took were illegally charged to taxpayers.

When Mary claimed to live with her parents in order to qualify in the Senate race.

Landrieu lives very fabulously in her Washington DC $2.5 million mansion. But in order to get around living in the state and somehow still representing it in the Senate, Landrieu used a unique loophole in which she simply claimed her parents’ (Moon and Verna) New Orleans house as her own home.

However, back in January, Landrieu listed her Capitol Hill mansion as her home address. And she even listed it as her home on her voter registration. The best part of the scandal was that the very left-leaning Washington Post talked with Landrieu’s parents’ neighbors in New Orleans and the majority of them said they hardly ever see Mary.

When Mary’s Twitter attack on Bill Cassidy literally crumbled before our eyes. 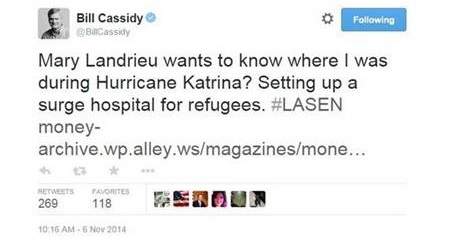 Gosh, that was classic.

When Mary failed time and time again to get the Keystone Pipeline passed.

Landrieu’s most infamous failure is undoubtedly her attempts to get the Keystone XL Pipeline on the Senate floor in the Democrat controlled Senate. Landrieu claimed so many times to have so much “clout” as the Senate Energy Chairwoman, but she never had enough clout to get fellow Senate Democrats behind the energy project.

At first, Landrieu claimed that she had the 60 Democrat votes to get the pipeline brought up for a vote. She failed at that. And then most recently, she could not get enough Democrats to vote for the project, even though her fellow Democrats knew it was important to get the project passed in order to help Landrieu in her race against Cassidy.

But, what’s hilarious is that Landrieu truly dug her own grave with the pipeline failure because she donated and helped elect 35 Senators who voted against the project, essentially another nail in her campaign coffin.