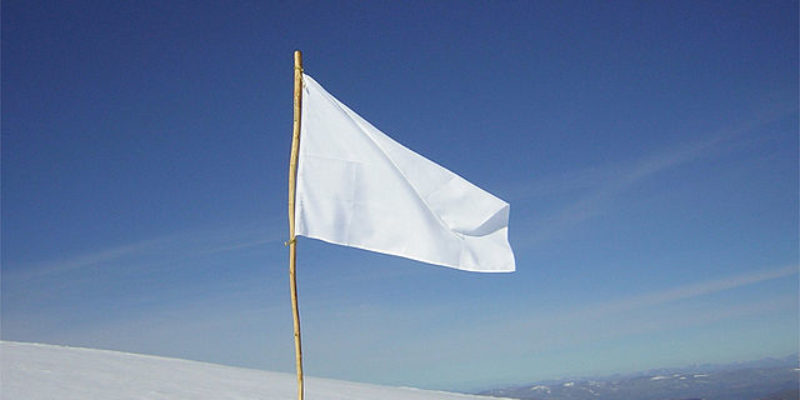 Here’s a report from Fox News:

Senate Democrats, meanwhile, voiced support for the new plan after initially staying coy. A day earlier, McConnell, R-Ky., effectively gave them what they wanted – by agreeing to hold a stand-alone vote on a DHS funding bill, with no immigration measures attached.

“We are going to do everything we can to make sure it passes by an overwhelming vote. I think virtually every Democrat will vote for that,” Senate Minority Leader Harry Reid, D-Nev., announced Wednesday.

After going to the Senate floor and slamming President Obama’s executive amnesty in November, McConnell hoisted the white flag of surrender. I don’t have much to add to Scott McKay’s thoughts on this yesterday except to remind him of something he told me once, Mitch McConnell couldn’t sell ice water to an Arab in the desert.

Most of the reason why McConnell looks like a loser and a wimp is because he can’t message or sell anything. In order to sell a product, you have to believe in it. I’m sure deep down that Mitch McConnell is a conservative, but he doesn’t really believe in actually going to the mat and actually challenging the status quo. Much of this is because conservatives really need to have a discussion on what we believe and why we believe in what we believe, but that’s for another day.

What President Obama did with his executive amnesty was to try to do the job of Congress and make law. This was done despite the fact that Congress has refused to pass his preferred immigration bill and the American people had just elected a new Congress that was even less likely to do so as well. Let’s be clear, President Obama attacked the time-honored American tradition of separation of powers with his executive amnesty and for that reason alone, House Speaker John Boehner and Mitch McConnell should’ve gone to the mat and do everything necessary in their power to overturn it.

However, the GOP leadership and “establishment” don’t really want to change how Washington works. There’s something wrong with a party that can be frightened with just a dirty look into not shutting what is one of the most useless departments of the Federal government and at the same time, claims to be for Constitutional and limited government. This is why the American people and conservatives are angry at them and don’t trust them.

Many conservatives may decide to keep voting Republican, but simply stop doing all the things that a party needs its base to do to win elections: ie. giving time and money. With out of touch and weak “leaders” like Mitch McConnell, who could possibly blame them.