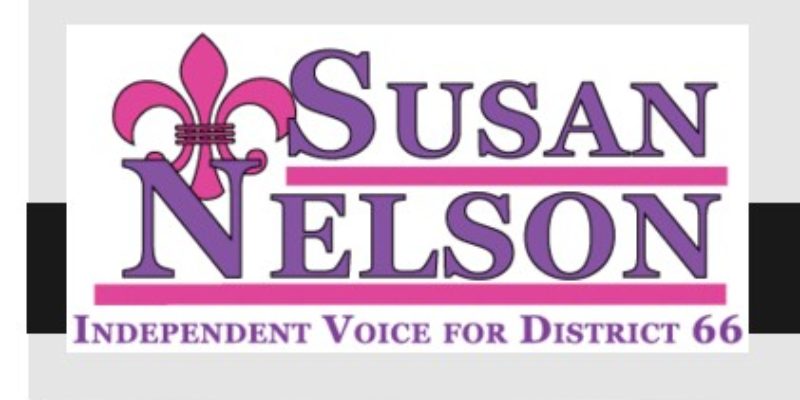 Susan Nelson is running in the District 66 race as an Independent. However, if a person were to take a look at posts on her facebook page they might think otherwise. The fact that she was the Communications Director for the Louisiana Democratic Party at one point could make a person wonder how “Independent” she really is. Quotes from her facebook page, website, and other social media sites are revealing about her stance on some key issues.  She is running as an Independent but even she says that her “résumé reads likes a Who’s Who of the Democratic Party,”

“I met this morning with legislators and community leaders on the steps of the Capitol to talk about solutions to the closing of the Baton Rouge General’s Mid-City ER. While that ER is not in District 66, its closing will impact the entire city. I support the efforts to come up with a comprehensive solution that isn’t mired in the political ideology that got us into this mess in the first place. We used to have a system where the money followed the patient, and we don’t have that today thanks to exclusive partnerships and the failure to expand Medicaid. The current situation is unsustainable for everyone. No one should suffer needlessly in an overcrowded ER because of politics.”

“instead of the 2nd Amendment Tax Free Holiday I proposed a tax credit for those who complete an NRA Gun Safety Class. The class gives gunowners tools and knowledge to protect children around firearms. Guns are part of our sportsman culture here in Louisiana, but we need to balance the safety of our children by promoting responsible gun ownership. The NRA Eagle Eddie Program helps even very small children understand Stop! Don’t Touch.”

Beyond Bricks (Education) (Click here to read our recent piece on who is behind Beyond Bricks):

“Had a great time at the Beyond Bricks listening session today. Don’t miss your opportunity to join the conversation!”

When it comes to education she has made her stance clear as the creator of Better Together. BT started as an effort to stop the St. George school district and is now a crusade to halt the vote on the City of St. George. She has made it clear that she is “against a vote on incorporation”.

FYI, Better Together admitted in a post on it’s facebook page that they used another non-profit’s reduced rate permit # for the mailer they sent out asking St. George supporters to withdraw their signatures.

More information about her can also be found on her website where she lists a link to a piece she co-wrote on food insecurity and food deserts. Also, concerning the issue of food deserts, she was involved with the Food Access Policy Commission which was launched by Kip Holden and Together Baton Rouge. and she clearly states that she supports Together Baton Rouge on her LinkedIn profile.

When asked about her involvement with Together Baton Rouge and its leftist agenda she gave a lengthy reply.

QUESTION: If you are not a Democrat why are you affiliated with Together Baton Rouge and the left-wing agenda they espouse?

“I reject the premise that they are a left-wing organization, that is Mr. McKay’s assessment, and that’s not the organization’s position. They are a bunch of religious organizations, my Episcopal diocese included, that have come together to focus on some serious problems in this town, namely transportation and food access.

There are republicans in that organization, democrats, libertarians, and many independents like myself. In fact one of the activities we did last year was a bible study with people of all faiths were we read scripture and reflected on how each of us saw it. In my group there were three staunch conservatives who voiced their positions. It was a learning experience for me to hear how different people interpreted scripture from their own hearts and their own words. I like to learn from other people and then work together to solve a common problem.

With regard to food access, it’s an economic issue, people who can eat better food have fewer health problems that make them less of a burden on the public dole, not to mention more consumers of rural farming activity in our area which helps the farmer’s economic position. If Together Baton Rouge is so left-leaning, then why did Sen. Bodi White stand with the organization shoulder-to-shoulder about the closing of the mid-city ER?

I don’t really know what Mr. McKay’s issues is with Together Baton Rouge, but he seems to like to label it, instead of talking about the fact that religious groups with ready pools of volunteers interested in working to improve this city are the very essence of what conservatives ask for when they want to take government out of the equation and have private people provide solutions. I guess my point is, is if conservatives seem so dedicated to reducing the burden on government through private efforts, why isn’t Mr. McKay affiliated with the organization. Does he not go to church?