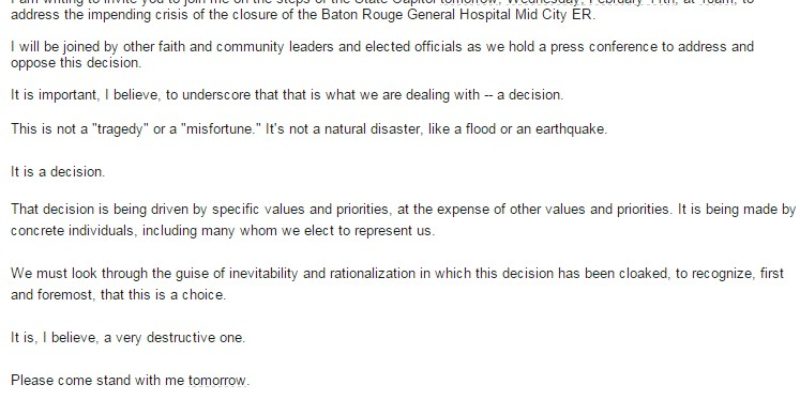 Below is an email from Fr. Rick Andrus, Pastor at St. Paul the Apostle Catholic Church, who serves on the Together Baton Rouge Executive Committee. The email subject is “Invitation to press conference 10am tomorrow to oppose closing of Mid City ER.”

The Business Report shares that “The Campaign for Healthcare for Everyone Louisiana, a grassroots organization, is spearheading the press conference. Though organizers aren’t prepared yet to say what exactly they’ll be asking for, Rep. Pat Smith, D-Baton Rouge, says the group will propose specific solutions.

“We are going to talk about what we think the state needs to be doing,” Smith says. “This is not just to vent. This is to talk about things that need to be done.”

Last week, Baton Rouge General announced that mounting financial losses of as much as $2 million per month will force the hospital to close its emergency room within 60 days.”

However, as you read it keep in mind that nowhere in the email is an effort to raise money to offset BR General’s losses, nowhere is there an effort to make it worth their while. This is going to basically be a platform for them to complain that somebody made a choice that was dictated by economics and logic. They’re not looking for ideas on how to make sure there’s an ER accessible in North Baton Rouge. They’re demanding somebody else lose money to cater to the wants of their constituency, and offer nothing in return. 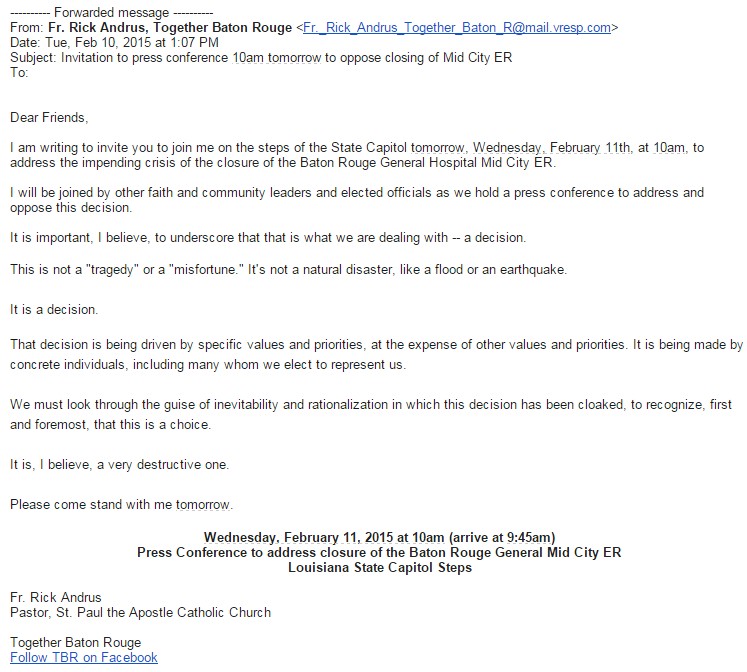 “Predictably, critics who call the closure of the emergency room for Baton Rouge General Medical Center a failure of public policy show the real failure comes in their unwillingness to grasp of the laws of economics, especially as it related to health care.

For months, the expenses of its emergency room had been outstripping its revenues, especially after the old Earl K. Long Medical Center closed due its deteriorating and outmoded condition, with most of its services done with state money now performed at Our Lady of the Lake Regional Medical Center.”

“But the problem is and always has been, because they get their health care essentially for free, poor adults would access such care for more trivial reasons and in less efficient ways – often a trip to the ER for ailments not deserving of intensive medicine. As the data have shown, the poorer – especially those on Medicaid – are disproportionately likelier to engage in this behavior.

Which means that the provider spends much more in delivery than it would have to for ailments that get a relatively low level of reimbursement, because these don’t require emergency medicine, both from private insurance or government insurance – although relatively few ER visitors there, if they have insurance, have something other than Medicaid – and uncompensated care payments for minor ailments also cannot pay enough for those addressed through emergency medicine. This created such an imbalance in payments that months ago the state set up a special subsidization in order to keep the ER open. Unfortunately, that was not enough and the hospital’s administration announced that soon it would stop delivering that service. The state hopes to steer resources to the area’s urgent care centers, where the vast majority of Mid City’s former ER patients could receive appropriate care, and costing taxpayers and providers less.”