Scott McKay has done a great job illustrating the problems with Governor Bobby Jindal’s proposed tax hike on businesses. However, Governor Jindal is proposing a cigarette tax increase as well that hasn’t gotten as much attention, except from C.B. Forgotston and Professor Jeff Sadow.

Essentially, what Jindal is proposing is a refundable tax credit for new fee increases at Louisiana universities that will be funded by a cigarette tax increase. If you can’t figure out the logic of such a move, don’t worry I can’t either.

Here’s what C.B. Forgotston e-mailed to his list a couple of days ago about it:

Bobby Jindal has proposed to increase college fees on student and parents in order to reduce the severity of the cuts he made to Higher Education.

In order to lessen the burden of the new increase on the students and their families Jindal is proposing an end-of-year refund for the additional fees.

To provide revenues for the refunds, Jindal is proposing a $100 Million cigarette tax increase.

While no legislation has been introduced for us mullets to peruse, this Rube Goldberg plan appears to have some significant flaws.

–There is no guarantee that the cigarette tax increase will pass. That, however, does not preclude the college fees from increasing.

–Even if the cigarette tax passes, there is no guarantee that it will produce enough revenues to provide the students and their parents a full refund for the new fee. At best, it will be pro-rated.

Can’t you see the new cigarette ad campaigns sponsored by the Student Government Associations: “Save money; light up for the students!”

Professor Sadow continued on the Rube Goldberg theme today here on The Hayride:

Why go to all this trouble? Peripherally attached to a budget somewhat contortioned, perhaps the most convoluted item of Gov. Bobby Jindal’s fiscal year 2016 effort is a request (not actually in the budget) that cuts in state monies for higher education could be offset partially by an extra fee put upon students, the cost of which would be claimable as a tax credit, financed by an increase in cigarette taxes. Why such a Rube Goldberg device when there’s a far less complex answer to bolster higher education’s resources?

Administration and higher education officials have put forth preliminary ideas on the subject, pegging an amount of $2,000 per student (per what unit of time left as of now unsaid, but it may be for an academic year), although that could vary by field of study and institution. Whatever structure it takes, for this to happen it would take two sets of two-thirds majorities in each legislative chamber, one to add the fee and one to increase the cigarette tax, while then needing a majority vote in each to introduce the tax credit. And then it would cost extra to administer the complicated thing and probably (thehistory of tobacco tax hikes show) take in fewer dollars than anticipated, meaning taxpayers pick up the tab to pay for the credits – which may not do much or any good for the small portion of households whose tax liability does not equal the fee.

As Professor Sadow points out, the cigarette tax has a record of not generating the amount of revenues as promised. What tends to happen is that as cigarette taxes increase and make cigarettes more expensive, people think about quitting smoking to save money. That’s why they’re sold as anti-smoking measures.

While I agree with Professor Sadow that Louisiana would be better off raising tuition instead of engaging in this ponzi scheme, it still doesn’t discuss the real problem with Louisiana’s higher education. The problem is Louisiana has 15 public universities to serve a state with just 4.65 million living in it. Only three of the nine universities in the UL system have enrollments of over 10,000 students. LSU is the only non-UL university that has enrollment of over 10,000 students. There’s needs to be some major consolidations of campuses and yes, some universities in Louisiana need to be closed and/or privatized.

According to The Advocate, some members of the state’s Board of Regents are floating a proposal to privatize some of Louisiana’s public universities. This has (predictably) drawn opposition from State Rep. John Bel Edwards, who is the only Democrat running for governor. 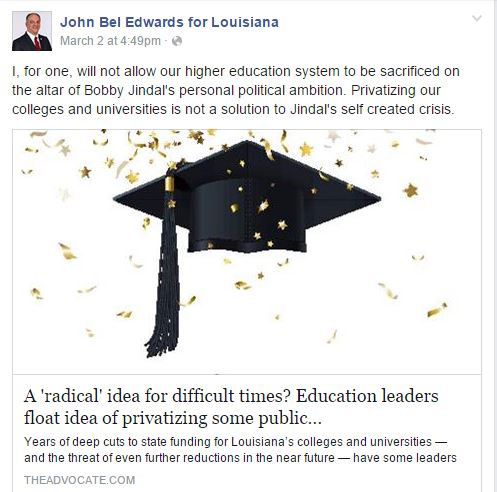 Louisiana doesn’t have the money to keep such a large university system. In addition, it is not fiscally wise to support 15 public universities for a population of less than 5 million people. South Carolina, which is slightly larger than Louisiana in population, has 9 public 4-year universities.
Instead of trying to prop up Louisiana’s bloated higher education system, we need to privatize or close some of these universities. That’s the only way we will fix higher education.
Interested in more news from Louisiana? We've got you covered! See More Louisiana News
Previous Article Low Popahirum, March 4, 2015
Next Article Cedric Richmond Tweets ‘#PeopleOverPolitics’ Day After Skipping Netanyahu Speech With Other Dems